Last season was a difficult one for Ajax Amsterdam. Their pre-season preparations were thrown in to disarray by the decision of coach Peter Bosz to depart for Borussia Dortmund. We then saw the club look inwards for the coaches replacement with Marcel Keizer moving up from his role with Jong Ajax to take charge of the first team. This appointment only lasted until December when he was relieved of his position and replaced by the FC Utrecht coach Erik Ten Hag.

Under Ten Hag there was a definite sense of improvement from Ajax with the club once again adopting a clear playing philosophy although there were still teething problems which prevented Ajax from challenging successfully for the Eredivisie title.

Coming into the 2018/19 season there is a feeling that Ajax are in a position to reassert themselves domestically. They have survived relatively intact this summer with wide forward Justin Kluivert being the only notable departure having joined Roma. In terms of players coming into the squad, we saw Ajax sign two players with significant experience of the Eredivisie with Daley Blind rejoining the squad from Manchester United and Dusan Tadic, formerly of Groningen and FC Twente, signing from Southampton. These two will join the squad alongside the likes of Kaj Sierhuis, Carel Eiting and Noussair Mazraoul who will gain more first-team minutes from the youth ranks.

As has been the case in recent years for Ajax the season curtain-raiser once again came in the qualifying rounds of the Champions League where we saw them hosting the Austrian side Sturm Graz. 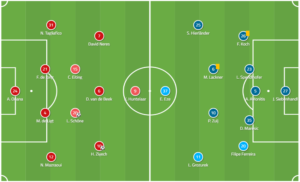 The first thing to stand out when looking at the team news coming out of the Amsterdam Arena saw was that one of the biggest midfield prospects in World football Frenkie De Jong was starting at centre back alongside Matthijs De Ligt. This was a role that De Jong had fulfilled in stages last season where his probing runs from the central defender gave an extra dimension to the attacking phase. It was expected that De Jong would revert to his more natural midfield position coming into this season but injuries dictated that he would start again on the left of the two central defenders.

We also saw starting shirts handed to two of the young players mentioned earlier with Noussair Mazraoul starting at right back and Carel Eiting in the centre of the midfield. In terms of replacing Justin Kluivert who had played last season out on the left-hand side, we saw Brazilian David Neres start from that side with Hakim Ziyech apparently starting wide on the right, as we would see as the game progressed Ziyech positioned himself far more centrally.

Ajax use fullbacks to provide the width

Ajax are of course famous as a club for their 4-3-3 system with their wide attackers always being given a prominent role in the attacking phase. With the use of Hakim Ziyech as a wide player going into this match, there is a definite sense that we may see a change in emphasis to a more central focus as they attack.

This match may be a sign of things to come as Ajax transitioned into their attacking phase we saw Hakim Ziyech move into central areas and David Neres drift between the wide lane and the half space in order to move the opposition defensive structure around.

The width in the attacking phase was provided by Mazraoul on the right and the Argentinian fullback Nicolas Tagliafico on the left. 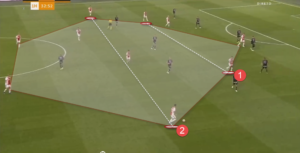 As you can see Klaas Jan Huntelaar is the lone forward with Donny Van De Beek given a more attacking role than we saw last year. What is specifically of interest here is the positioning of the wide forwards (1) and the fullbacks (2).

The wide forwards have moved infield with both playing in the width of the penalty area. They are then supported in the wide areas by fullbacks with Mazraoul supporting on the strong side of the field and Tagliafico on the left. The important thing to note is that even though the ball is on the right-hand side for Ajax the left back Tagliafico does not allow himself to drift inside and instead holds the width on this side, this means that should Ajax look to reset and shift the ball back over to the left-hand side there will be space for them to exploit in central areas with the Graz defensive structures forced to acknowledge the positioning of the fullback out on the left side. 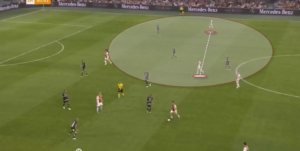 Once again in this example, I have shown the positioning of Ziyech who is almost completely in a central position with the ball moving across on the left-hand side of the field for Ajax.

Once again the right back Mazraoul is high on the right side of the field holding the width for Ajax. Look at the positioning of the Sturm Graz defenders in the image, the opposition left-back has had to push out wide to cover the threat that Mazraoul poses in that area. This simple action has stretched the spacing between the left back and the left-sided central defender, this gap can be exploited by Ajax whether by a pass played through the line or with a player isolating the left-sided central defender and making a run down his blind side with the ball on the right. 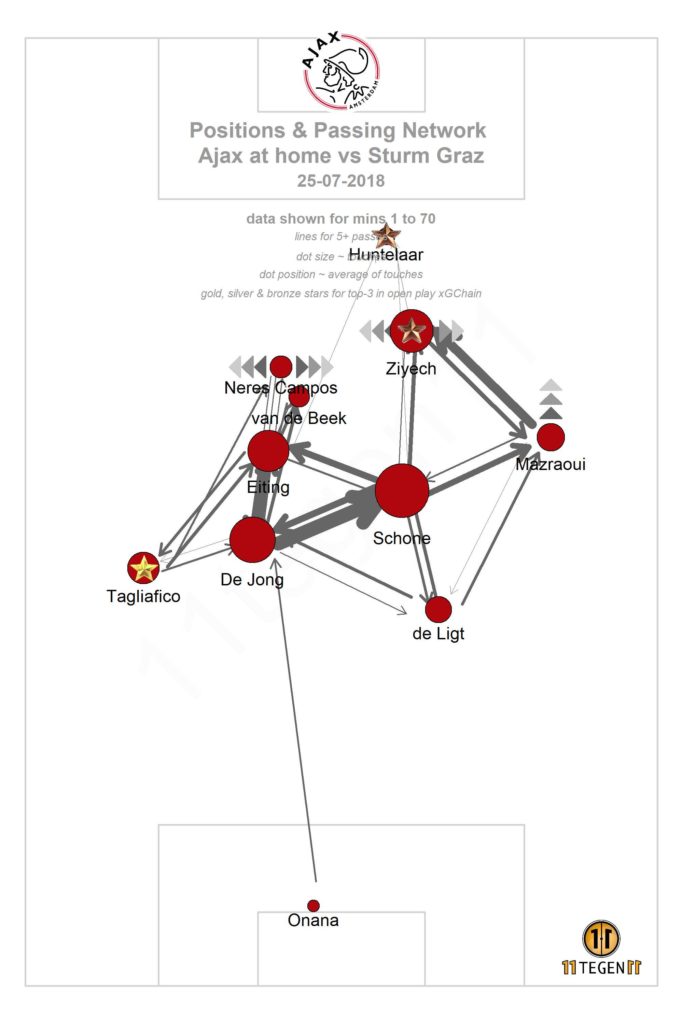 As you can see from this pass map, provided by the excellent @11tegen11 using Opta data, there were exceptionally strong connections between De Jong, Eiting and Schone in central areas but we can also see the positioning of Neres and Ziyech who are narrow towards the front man.

Ajax play with structure and play between the lines

During preseason for Ajax, there were already signs that Ten Hag planned a more technical style of play than we saw last season at the Amsterdam Arena. Whilst Peter Bosz and Marcel Keizer preferred a more direct style in the build-up Ten Hag wants to see his side dominate the opposition with the ball and play through the thirds of the field.

With Frenkie De Jong and Matthijs De Ligt both being composed and capable in possession from the defensive line we would often see Ajax combine effectively in central areas as they looked to build a sustained attacking phase.

In this example we see Frenkie De Jong in possession having stepped out into the opposition half with the ball at his feet. In the highlighted area there are two Ajax players already positioned between the defensive and midfield lines of the opposition.

The other thing to note is that Tagliafico on the left side is going to make a high run on the wing with the left-sided player moving centrally to empty the wide space. This high movement from the left back will force the opposition defensive structure to move and take account of the new threat. This in turn simply opens up the passing lanes for De Jong to play the ball through into the space in front of the defensive line and Ajax have an advanced platform from which to play from.

Once again here we can see Ajax playing between the lines in order to progress the ball forwards.

There is little in the way of pressure on the ball with the man in possession and instead, he is able to take advantage of the gaps in the opposition defensive structure. The player who moves to receive the pass forwards actually comes from an advanced position and drops into the space between two Sturm players to take possession.

Not only do Ajax then have an advanced platform to play from he also is able to turn on the ball to drive into the space in front of the Sturm defensive line.

For any of you that have been following my work for a while either through my writing or podcasting it is no secret that I have a huge amount of admiration for Frenkie De Jong, Once again in this match playing from the centre of the defence De Jong did not disappoint as he dominated in the attacking phase whether passing forwards through lines or driving forwards with the ball at his feet.

In this example, we can see De Jong stepping into the opposition half with the ball at his feet. This is where he causes the opposition real issues when playing from the defensive unit as he steps out in possession and is not covered or pressured with his ability to pass through the lines.

In this example, he finds David Neres in an advanced position with the wide player taking possession and being able to drive into the half space to threaten the opposition defensive lines.

With the opposition dropping into a medium passive block here we see the issues that De Jong poses to opponents. He drops back into the last line to accept the ball for the goalkeeper before turning and driving forward with no opposition player offering pressure.

As he reaches the midfield line most defenders would be looking for a passing lane in order to progress the ball forwards. De Jong is more than happy to carry the ball and he identifies the weak point in the opposition defensive structure before pushing forward through the midfield line.

In making this run De Jong effectively takes five opposition players out of the game giving the advantage firmly to Ajax.

A 2-0 win, in the end, was certainly the least that Ajax could have expected given their dominance throughout the match. There were definite signs that the squad is more settled than it was going into last season and both Blind and Tadic came on to make their debuts in the match.

The second leg in Austria now should be a formality but the key will be for Ajax to remain professional going into the match as their preparation for the upcoming season continues.

Under the microscope: Poised Perr – the next De Ligt who...