There are not many clubs around today that identify themselves via their philosophy, the ethos and morals that define the players, the fans & the club itself. In fact, I can only think of 3; FC Barcelona, Bayern Munich and of course Ajax.

The foundations on which the club has evolved is built on the ideas of a few brilliant men; Jack Reynolds, Rinus Michels and Johann Cruyff. Today the club fills its boardroom with serial winners who are equipped with experience of taking the club to the highest level of club football. With individuals like Tonny Bruins Slot, Dick Schoenaker, Edwin Van Der Sar & Cees Vervoorn holding places at Director level, regardless of who is at the helm the way of life at Ajax is always expected to follow the principles of the great men who have come and gone before.

When appointing Erik Ten Hag in December of last year following the departure of Marcel Keizer, it was clear Ajax were following the principles of Cruyffism. Between 2013-2015, Ten Hag was the Coach of Bayern II where he enjoyed a successful relationship with non-other than Head Coach & Cruyff devotee Pep Guardiola. Its well known that Erik Ten Hag shares a similar amount of passion for football as Guardiola, Ten Hag’s viewpoint on football is mercurial as his thinking towards the game. While in charge of FC Utrecht he had the daunting task of trying to guide them further up the table, with limited funds and terrible facilities he had to improvise his tactics and implement his own style of play to find success.

When taking over from Marcel Keizer, it would be reasonable to say that things got off to a slow start for the Dutchman, but after a decent pre-season that contained a 5-1 thrashing over RB Leipzig its clear things are starting to evolve from last season.

In the small sample we have from this season so far, Ajax have come away from their traditional 4-3-3 system and have opted for a more fluid version of a 4-2-3-1 that sometimes transformed into a hybrid 4-4-2 with Donny Van De Beek playing almost as a 2nd Striker, a role Davy Klaassen used to fill before his move to Everton.

The shape that Erik Ten Hag has instilled at Ajax this season is a rather peculiar one, in The Netherlands the first 2 names on team-sheets are usually the Left Winger & Right Winger and build from there. In the few matches we’ve seen of Ajax this season there seems to be a huge amount of freedom and movement from the wide players Hakim Ziyech & new signing Dusan Tadic. With Klass Jan Hunterlaar spearheading the attack, the 2 wingbacks; Noussair Mazraoui and Nicolás Tagliafico will act as the wide players in the system, allowing Ziyech and Tadic to roam inside and support Hunterlaar. 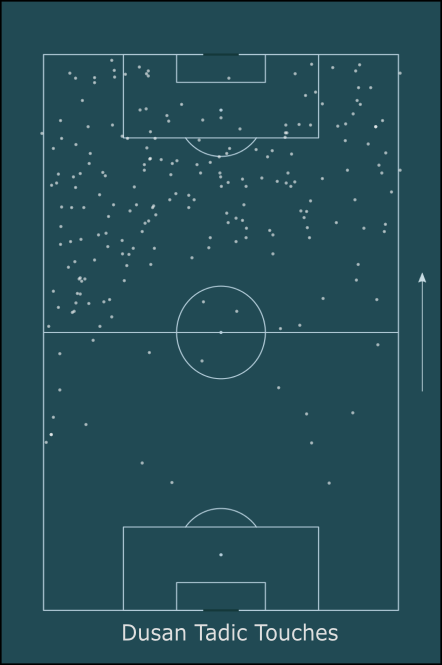 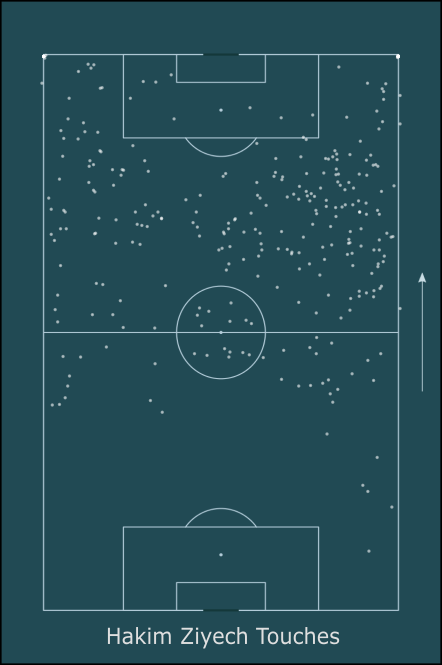 By looking at these plots that chart each respective players touches from this season so far, we can see there is not a lot of difference; there is a small nod to each players starting side (mainly Ziyech) but this is a testament to the fluidity that currently exists within the Ajax squad.

There’re some players that just make football a joy to watch, Frenkie De Jong is one of those players. You can scroll through your Twitter feed when Ajax are playing and see GIF after GIF of Frenkie picking the ball up from deep and casually skipping past players and no matter how many times you watch… it never gets boring.

Last season Frenkie played a large portion of it at Centre Back which led to people coming up with the ‘False CB’ position. This season, after Ajax purchased Daley Blind from Manchester United, Frenkie is back where he belongs; in Midfield. When in possession or build-up phases of the game, Blind & De Ligt will split and allow Frenkie to come deep and almost create a 3-5-2 in these scenarios. 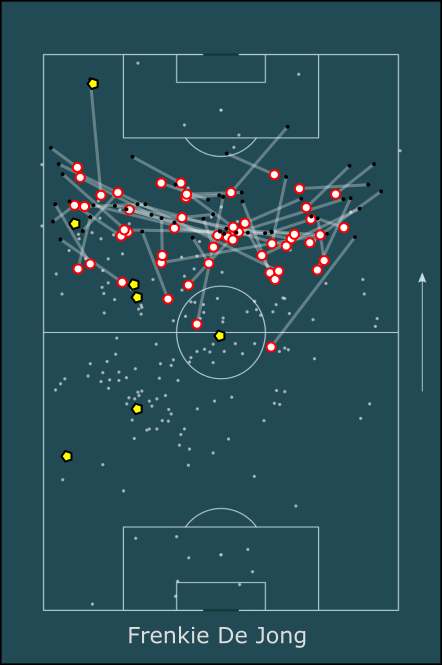 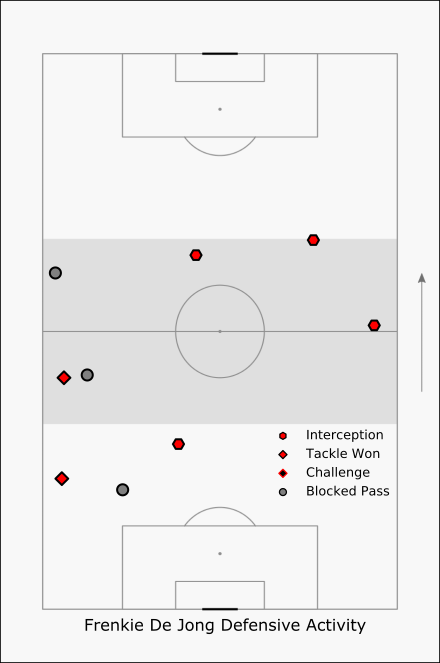 Starting with Plot A, we can see by the position of the touches where Frenkie has come deep, allowing Mazraoui and Tagliafico to advance forward into the space vacated by Ziyech and Tadic where they can provide a level of width. The successful dribbles and passes into the final 3rd are key for how Frenkie operates, a couple of deep dribble completions is complemented well by the amount of pass he plays forward; particularly out to the left and right wings. This season so far, Frenkie De Jong is displaying a high level of maturity, energy and output, which can only mean good things for Twitter users.

With the transfer window now shut across Europe; Ajax have left themselves in a strong position, after the disappointment of losing Justin Kluivert to Roma for 15million and Amin Younes on a free to Napoli, Ajax needed to strengthen offensively. Spending 10million on Dusan Tadic, 7million on Hassane Bandé who is currently out injured with a fractured fibula and 5million on Zakaria Labyad. Add those new signings to the already great offensive players of Ajax and you have a squad that is more than capable of competing on multiple fronts.

Maybe the best piece of business was bringing in hugely experienced Daley Blind from Manchester United for 14million, having a player who is as versatile as Ajax are fluid is a match made in heaven, the ability to play at left back, centre back and central midfield is going to make Daley Blind one of Erik Ten Hag’s biggest commodities.

This is a player who is 19 years old, he’s in his 10th year of the Ajax family and he possesses every tool to be a star. When a player comes through the ranks of the Ajax system you automatically know he can play a bit. When it comes to coaching, the Dutch for a long time were pioneers and constantly revolutionizing training methods. Weather its Raymond Verheijen and his periodization fitness regime or Wiel Coerver and his ball mastery sessions, the Dutch are famous for their small sided games which automatically allows the player to have a lot more touches of the ball; this style of training young players is the reason we’re now seeing the likes of Frenkie De Jong and Matthijs de Ligt flourish in the professional game.

So, we’re a few games in and everything looks promising! Erik Ten Hag looks to have found his preferred system with this Ajax side. Recruitment has been solid and potential departures have been laughed off. Ajax as always, believe in their academy and if they can produce more players like Matthijs de Ligt, Frenkie de Jong & Carel Eiting hopefully we can see Ajax return to their former glories.

Ajax vs Benfica Preview: Threat creators, successful dribbles and more – what do the stats say?

Ajax vs Besiktas Preview: Goals per 90, forward passes and xT-...