Ajax hosted NAC Breda in the Johan Cruyff Arena on their return to Eredivisie action. After their unfortunate Champions League loss to Real Madrid midweek Ten Hag’s men looked to recover with a win over the relegation candidates. Having received a boost on Saturday after Heerenveen held on to draw 2-2 with PSV, Ajax had the opportunity to regain some much-needed points on their rivals.

The Amsterdam club showed no signs of a team in poor form. Dominating from the very beginning, Breda were disposed of in a five-goal thrashing. While 15 years ago Zlatan Ibrahimovic dismantled the Breda defence with a moment of individual brilliance, it was the collective excellence of the Ajax squad that prove to be the deciding factor in this meeting between the two sides. 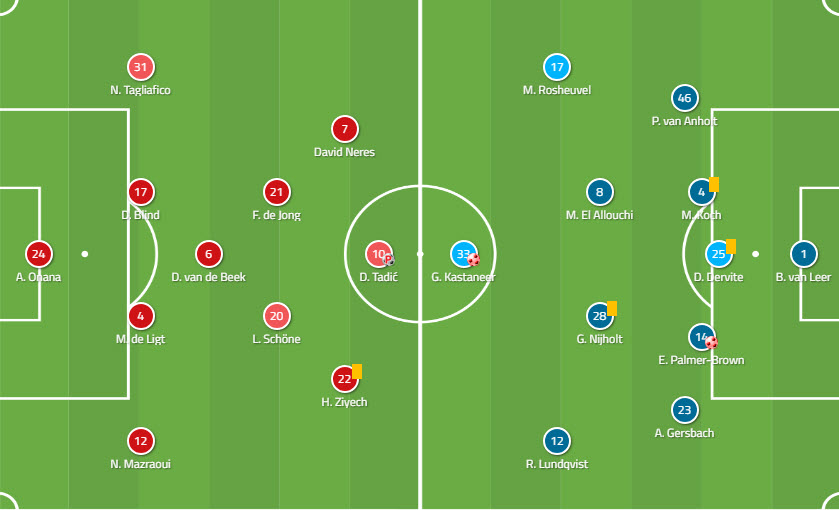 Interestingly Ajax remained unchanged to their match midweek. David Neres retained his place in the starting XI as Tadic was moved to a more traditional forward position. Kasper Dolberg and Klaas-Jan Huntelaar, therefore, were relegated to the bench.

Relegation strugglers NAC Breda set up in a largely defensive back five. Defender Palmer-Brown returned to the starting XI after their defeat to AZ Alkmaar. Top scorer Te Vrede was still suffering from tendon problems so Gervane Kastaneer started up top.

If you love tactical analysis, then you’ll love the digital magazines from totalfootballanalysis.com– a guaranteed 100+ pages of pure tactical analysis covering topics from the Premier League, Serie A, La Liga, Bundesliga and many, many more. Buy your copy of the February issue for just ₤4.99 here, or even better sign up for a ₤50 annual membership (12 monthly issues plus the annual review) right here.

Is Ziyech’s transfer to Chelsea in jeopardy following coronavirus crisis?