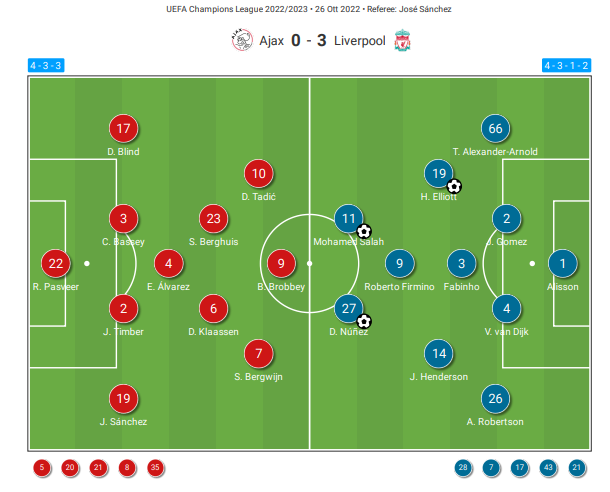 At the Amsterdam Arena, Mohamed Salah, Darwin Nunez, and Harvey Elliot scored a goal apiece as Liverpool defeated Ajax 3-0 in the UEFA Champions League. The visitors from Merseyside should have been behind by a couple of goals in the first half, but Ajax players failed to capitalise on the chances and ended up conceding three goals in 15 minutes. Ajax were the better side for the majority of the first half, but Steven Berghuis and Dusan Tadic didn’t finish their chances, which ended up costing them a home defeat to Liverpool.

We’ve broken down all the key stats for you to digest, including;
* shot maps
* xT (expected threat)
* pass networks
* xG timelines * defensive duels
* average positions and much more!
We also try to answer some questions for you with the visuals;

How did Ajax concede three goals in ten minutes? How Liverpool won the ball back in the middle and attacked Ajax?

To navigate the stats gallery simply click on the numbers to move through the pages.

How Donny van de Beek laid the platform for Ajax to...