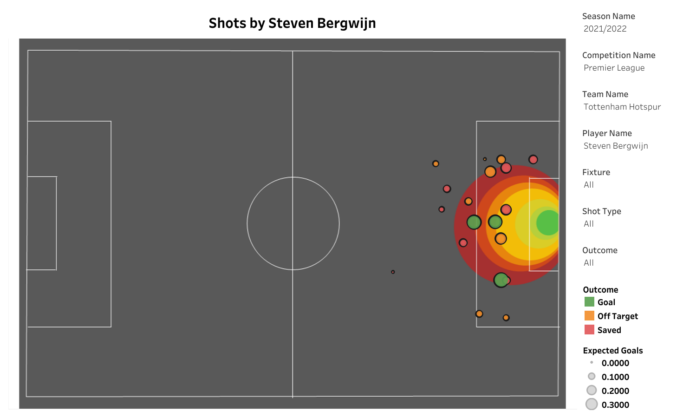 Tottenham Hotspur forward Steven Bergwijn is linked with a move to his former club Ajax. The Dutch player spent six years at the Ajax academy before moving to PSV Eindhoven. He was signed by Spurs in January 2020 and has been a regular part of their squad since then. However, the player has not been a regular part of the playing XI, and Dejan Kulusevski’s arrival in January has reduced his minutes on the pitch. The Dutchman is looking for a move away from the London club, and Ajax are emerging as one of the strong favourites to acquire his services. With Anthony linked to a move to other clubs, Bergwijn could be a perfect replacement for the player. 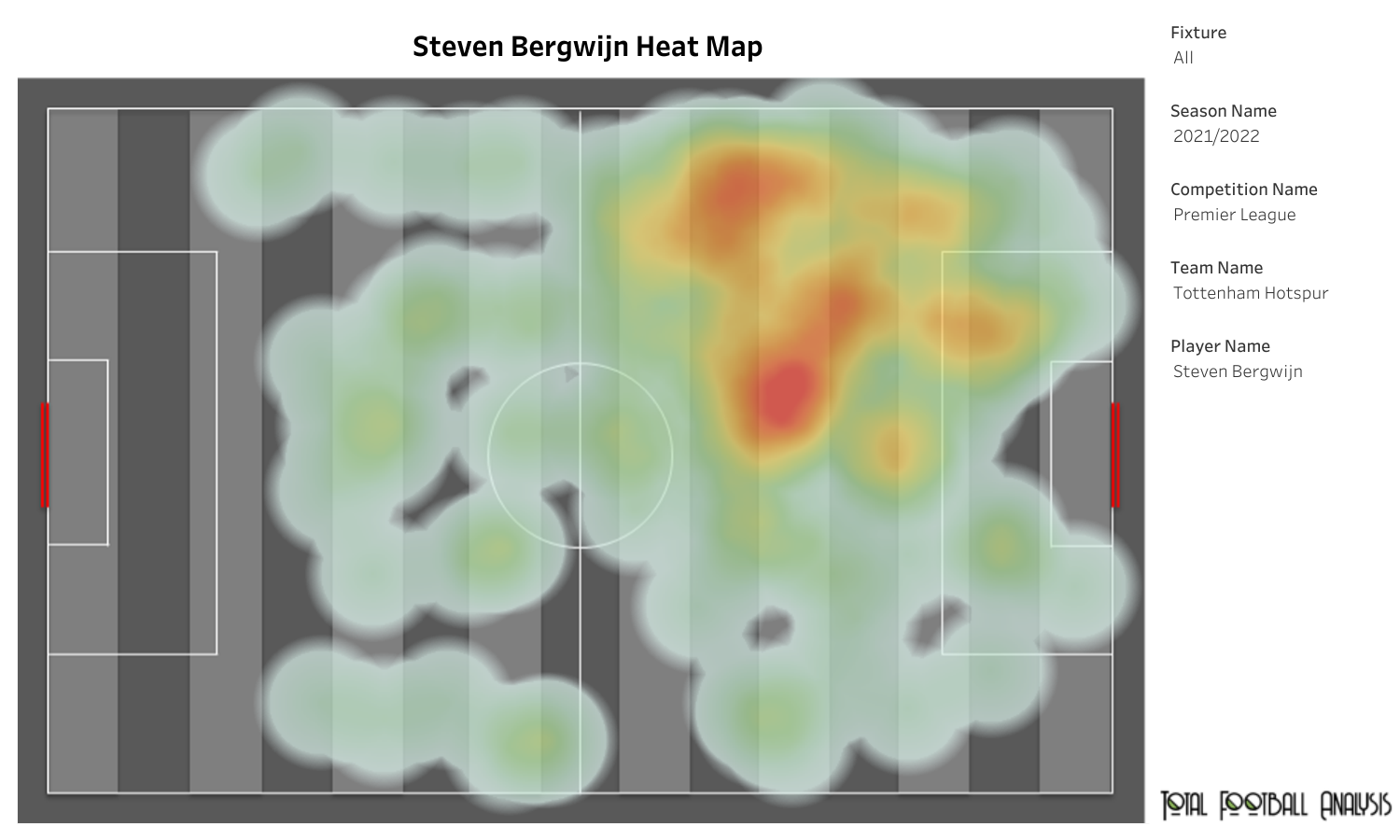 Steven Bergwijn has made 20 appearances this season for Tottenham Hotspur in the English Premier League. Of these 20 appearances, 16 have been made after coming off the bench. He has found the back of the net three times and has also provided an assist. The above heat map shows that he has featured mostly from the left side and also likes to get inside the opposition’s penalty box. He has had 14 touches inside the opposition’s penalty box this season.

The forward started the first three matches of the season for Tottenham Hotspur, and since then, he has only started in one match. This year he has only made nine appearances, and eight of them were from the bench. Dejan Kulusevski’s arrival in the team and his form on the pitch have kept the Dutch international on the bench. 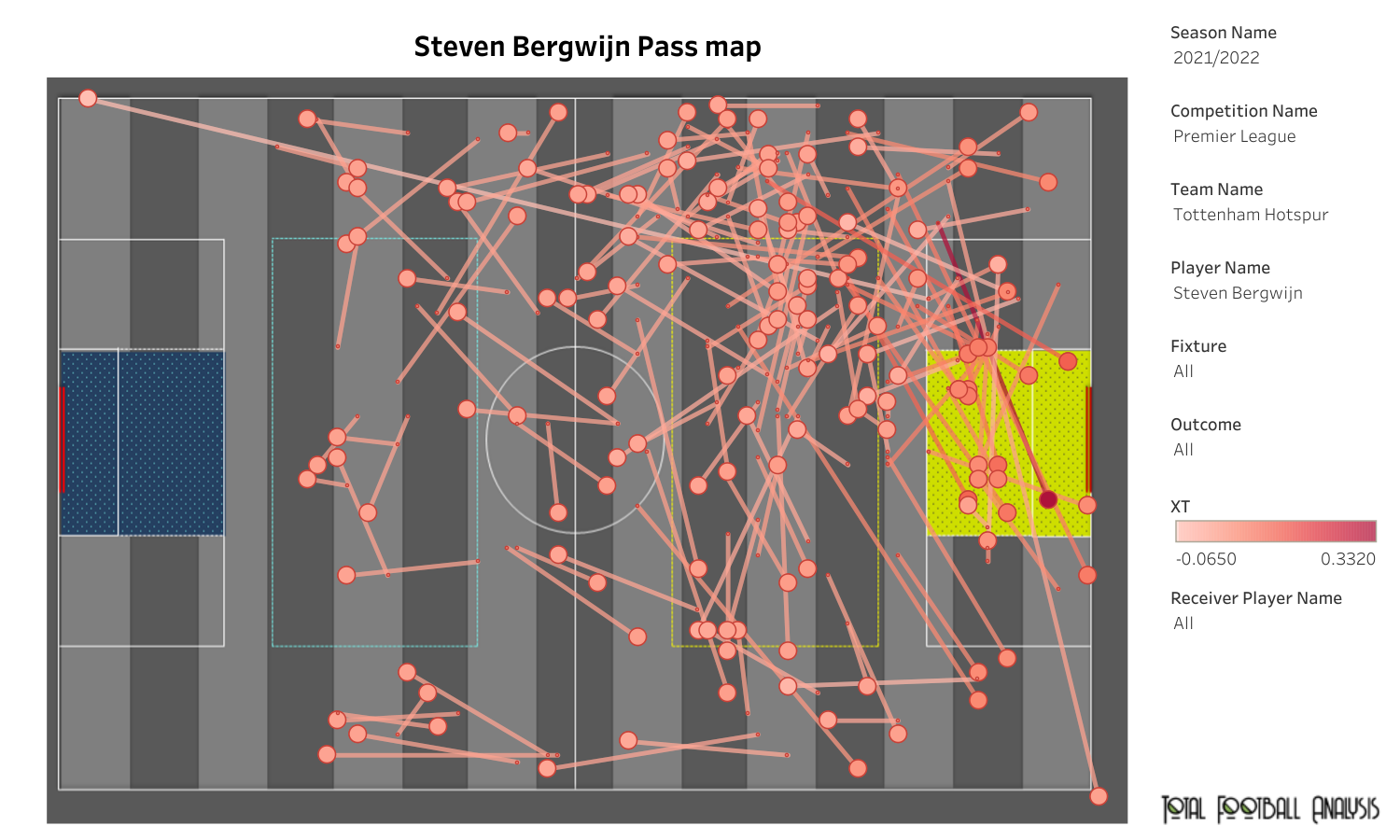 The above viz shows all the passes attempted by the 24-year old forward player. Bergwijn has attempted 151 passes and provided an assist. Most of his passes have been towards Hojbjerg. The Dutchman provided his only assist of the season in the first match against Manchester City. The assist to Son Heung-Min was a crucial one because it helped Spurs earn three points in their opening fixture. His passes this season include ten crosses, four smart passes, and four through passes. Bergwijn has spent fewer minutes on the pitch and has created fewer threats with his passes. 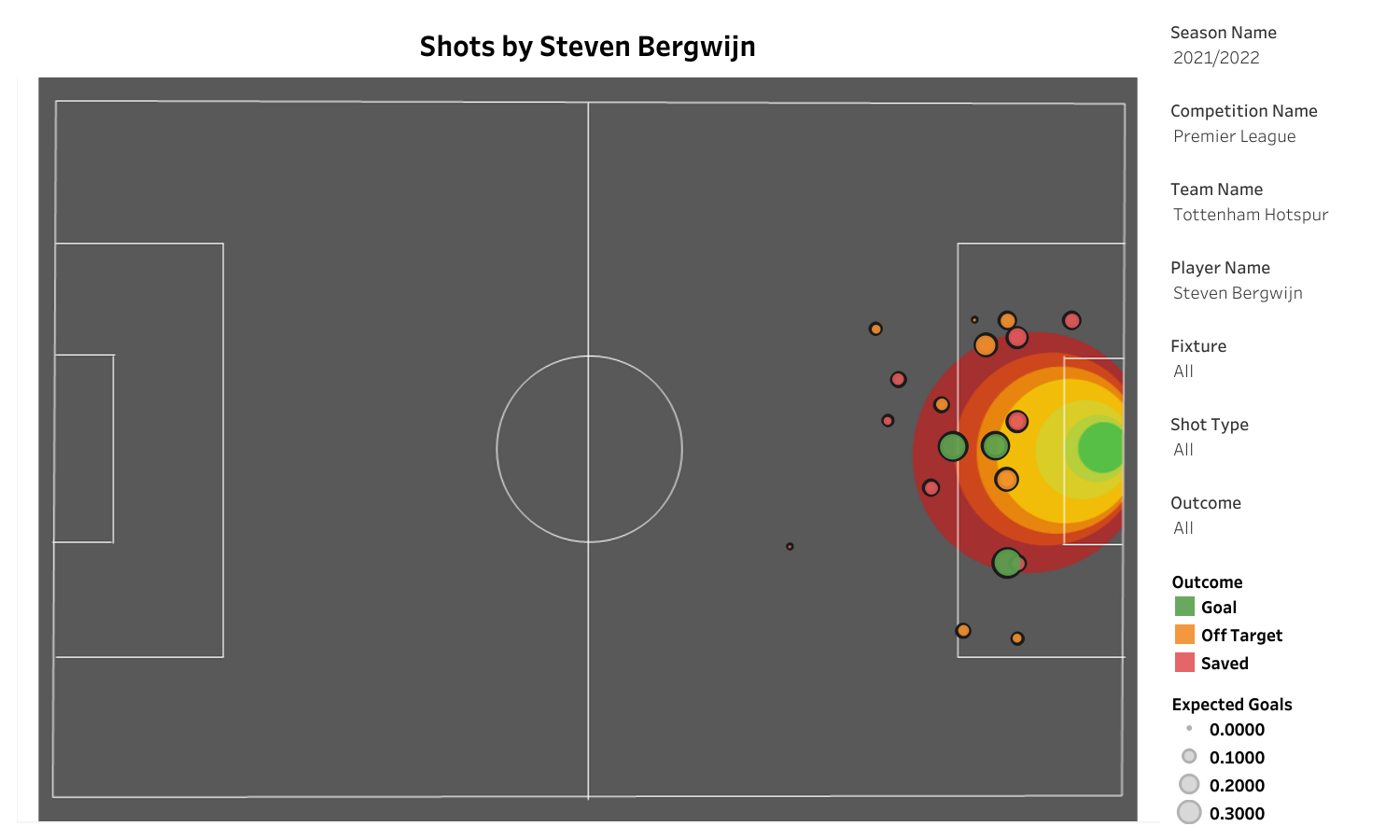 Bergwijn has scored three goals, all of them after coming off the bench. He scored two goals in 19 minutes on the pitch against Leicester City, and his most recent goal came against Newcastle United in April. The above map shows all the 19 shots attempted by the forward. He has managed to hit the target five times. From the above viz, we can observe that most of the shots have been attempted from inside the opposition’s penalty box, and he has converted three chances. The forward’s overall xG rate this season is 2.88.

Steven Bergwijn has proved himself by giving good performances for PSV Eindhoven in the Dutch Eredivisie. He is currently playing in one of the most competitive leagues in the world. The Dutchman could be a valuable addition to a young Ajax side and will offer a lot on the pitch. Ajax will look to acquire his services from the London club, and that would increase their chances of performing well in the league as well as in the UEFA Champions League. They are currently monitoring his situation at Spurs.

Under the microscope: Mohamed Daramy – Could he lead Ajax’s charge...

Ajax goalkeeper is in the middle of tremendous speculation

Transfer Talk: Ajax – The Dutch club eyeing a reunion with...