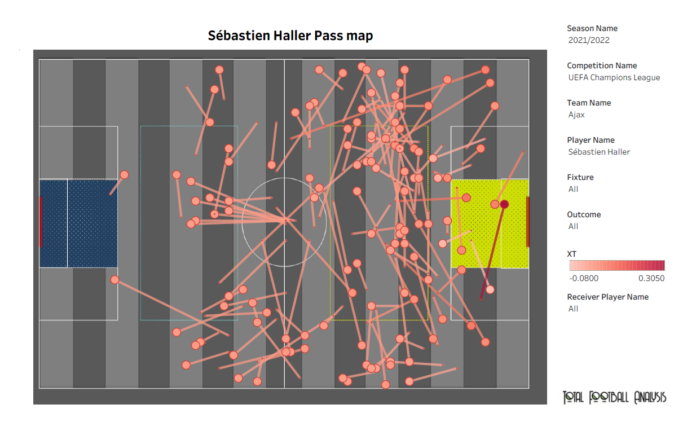 Things could not be better for the fans of Dutch giants, Ajax. Not only has their side dominated the Eredivisie, but they also have a realistic chance of progressing through to the quarter-finals of the Champions League for the first time in the past couple of seasons. On the domestic front, Ajax are on course to seal their 35th league title, sitting at the top of the table with a five-point lead over rivals, PSV. They have 17 wins, three draws, and only two losses in 22 matches. In the Champions League as well, Ajax had one of their most memorable performances in the group stage, winning all six of their matches, scoring 20 goals, and conceding just 5.

Much of Ajax’s dominant goal-scoring form can be attributed to their man-in-form Sebastien Haller. From failing to get into West Ham’s starting XI to becoming the top scorer in the Champions League, Haller’s rise amongst the top European strikers has been nothing short of sensational. The Ivory Coast international also became the fastest player to score 10 goals in the Champions League. He recently made his 50th appearance for the Dutch giants and has maintained his goal-scoring form throughout the season. The 27-year-old forward has a goal tally of 41 in his 50 appearances. He is currently averaging a goal involvement of 1.12 per match and looks set to lead the line for Ajax as they take on Benfica in the Round of 16.

Let’s take a look at his stats from the Champions League to gauge whether he can replicate his inspiring form in the group stages and fire Ajax into the quarter-finals. 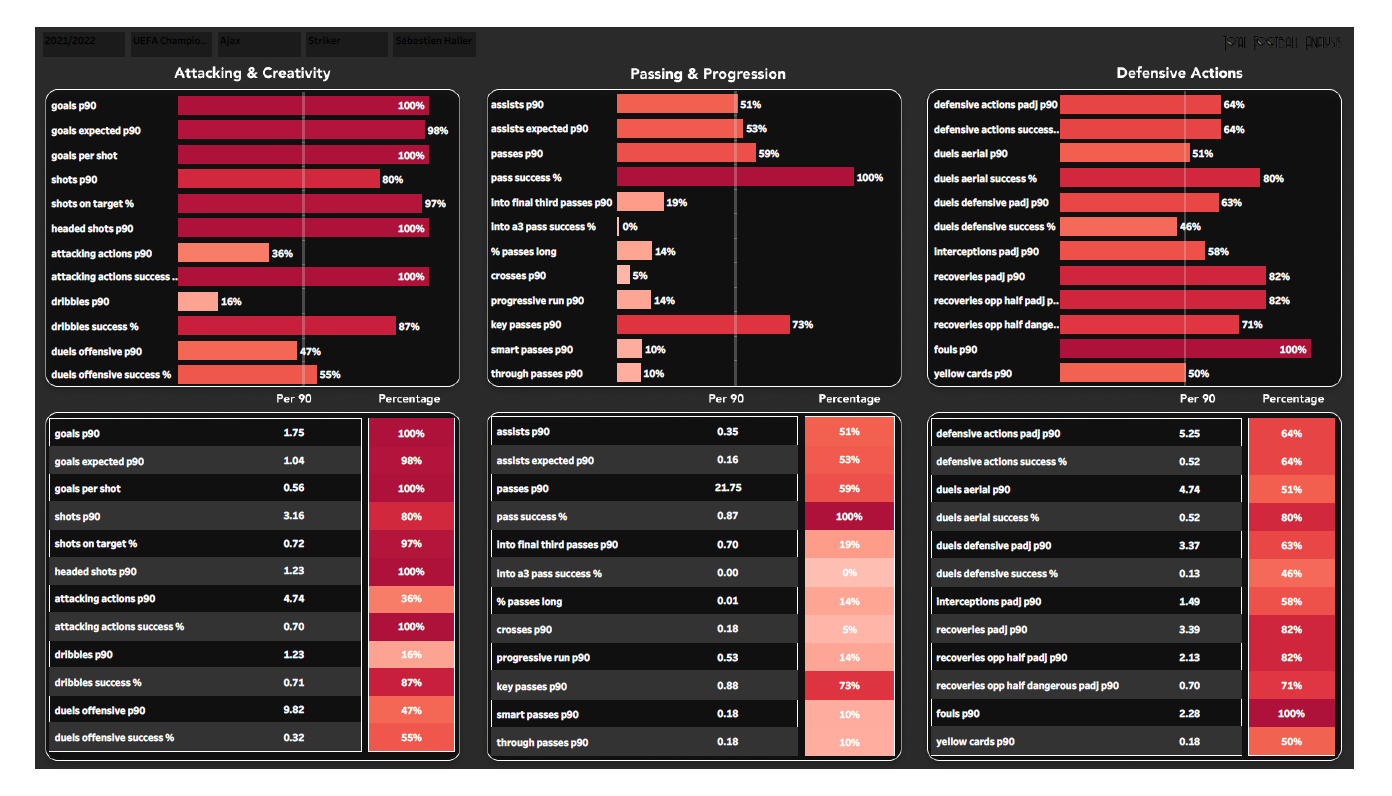 The above viz. displays the Ivorian forward’s overall stats in the Champions League. We can see that he ranks amongst the top in multiple attacking & creativity stats. He has average goals per match of 1.75 with an equally impressive xG of 1.04. Haller’s shot accuracy is also remarkable, while he averages more than four attacking actions per match. The 27-year-old has also managed to fulfill his defensive duties, as indicated by his defensive stats. He has displayed his versatile finishing throughout the season, and his towering build makes him a threat during set-pieces. The Ivorian’s ability to finish with both feet makes his runs into the box more threatening as he can shoot with just a few touches of the ball. 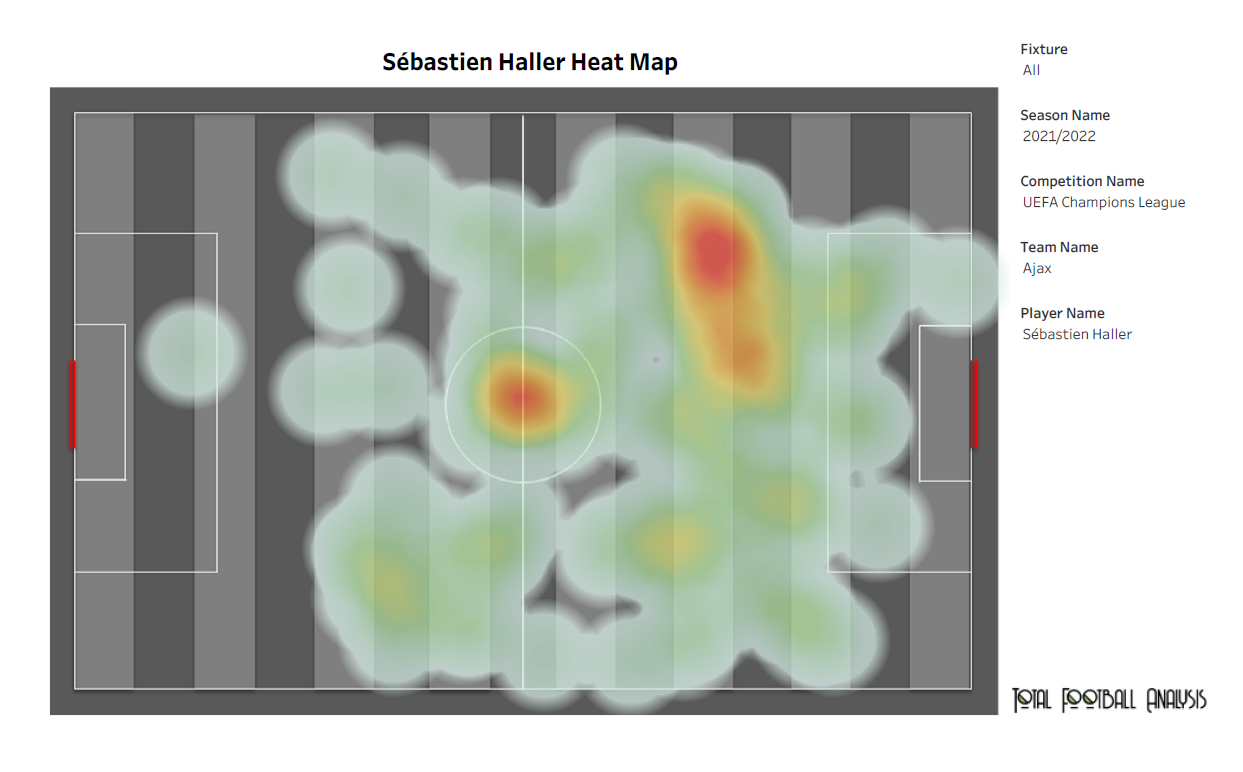 In the above viz., we can see the areas of his activity. Haller has mostly occupied the half-spaces on the left flank while also dropping deep to aid his side during the build-up. Erik ten Hag deploys him as the central attacker in his 4-2-3-1 or 4-3-3 formation. During the attack, Ajax’s full-backs make overlapping runs into the channels while their wingers drift infield. These movements give Haller the freedom to withdraw into deeper territory and combine with the forwards on either side of him, making it difficult for the opponents to mark him. 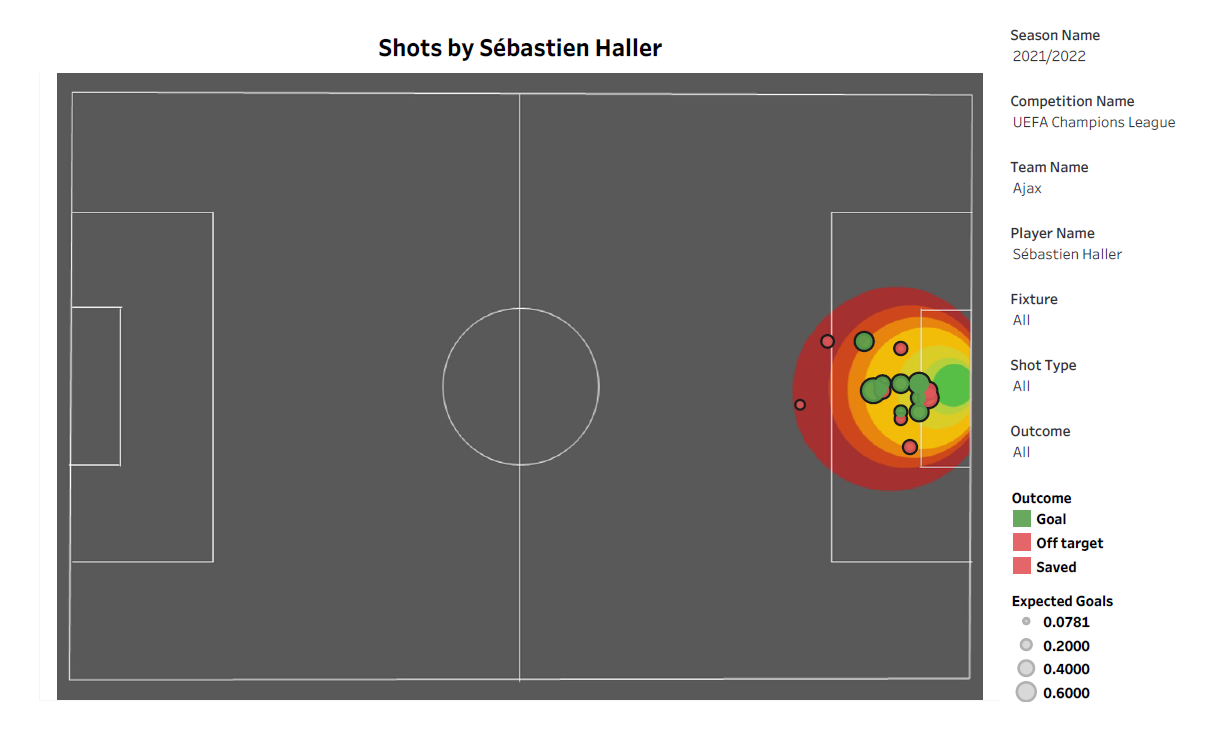 The above ‘shot map’ highlights the locations on the pitch from where the forward has taken his shots. We can see his frequent attempts from inside the opposition box, indicating that he has been able to get into the penalty area frequently. All of his goals so far have been scored from inside the box. Haller’s hold-up play is also underrated as he is constantly seen playing a diagonal through ball into space.

Haller has maintained his top-notch form throughout the season. The forward scored a hat-trick on the weekend as Ajax secured a 5-0 win against Twente in the Eredivisie. The Ivorian’s remarkable form and stats indicate that he can aid his side in their bid to progress to the quarter-finals of the Champions League.