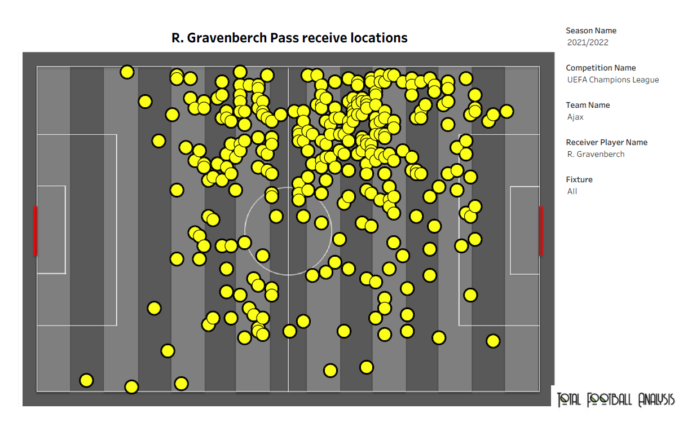 It has been reported that Ajax have started listening to offers for their young midfield sensation – Ryan Gravenberch. With just over a year left in his current deal, a host of clubs have expressed in signing the 19-year-old midfielder. Amidst the interest from top European clubs such as Bayern Munich, Liverpool, Juventus, Real Madrid, and Manchester United, it is looking increasingly difficult for Ajax to hold on to the midfielder.

Another one of Ajax’s talented youngsters to rise from the academy before making their move to the first team, Gravenberch, has been attracting a lot of interest since first breaking into ten Hag’s starting lineup. At the age of 19 years, the Dutchman plays with an assurance of a much-experienced player. His qualities on the ball have been evident for a while now, and he is easily one of Ajax’s best midfielders. Gravenberch has also impressed on the international front, having been capped by the Netherlands on nine occasions. He was also included in his country’s squad at Euro 2020.

The youngster operates as part of a midfield-pivot at Ajax and has been influential in his side’s buildup, often occupying deep spaces. Despite the news of contract negotiations breaking down, Ajax hierarchy should do everything in their power to hold on to the midfielder as he is an instrumental part of ten Hag’s setup. Gravenberch has made 26 appearances in the Eredivisie, scoring twice and laying five assists, while he has also featured in all eight of Ajax’s Champions League fixtures, although his side’s quest for European glory ended in disappointment.

Let’s take a look at some stats to gauge the reasons why Ajax should hold on to the midfielder. 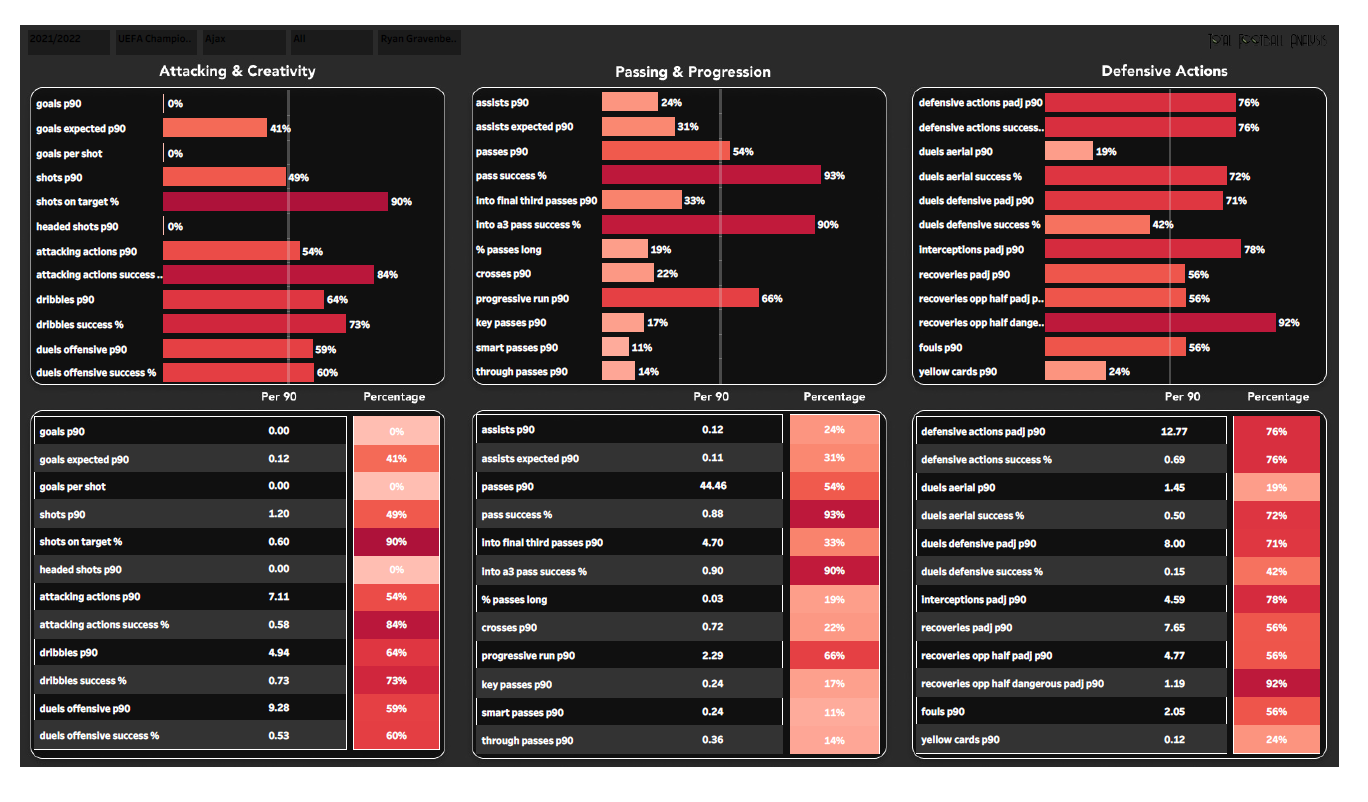 In the above viz, we can see Gravenberch’s overall stats in the Champions League this season. The 19-year-old is a player with impressive defensive abilities who is assured in possession and possesses excellent ball control. We can see that he has ranked above the league median in terms of most of his defensive stats. His most notable defensive stats are defensive actions per 90, defensive actions success rate, interceptions per 90, and recoveries in the opponent’s half dangerous per 90. Despite his age, the young midfielder displays confidence with the ball at his feet and is capable of progressing through the midfield. Gravenberch is impressive when passing the ball to the final third, as indicated in his passing & progression stats. 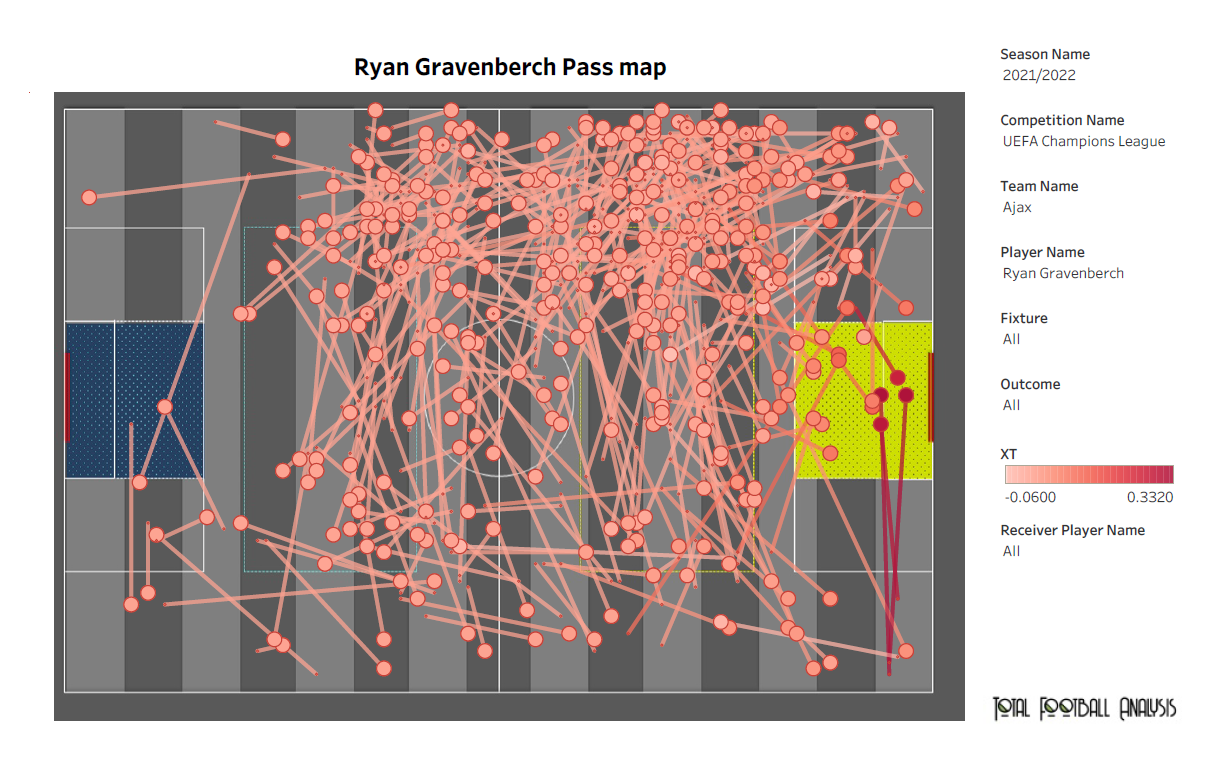 The above viz highlights the areas of the pitch where Gravenberch has delivered his passes. We can see that he has made several passes near the opposition box from the midfield. He displays impressive vision and awareness as he often tries to break the opposition defensive lines with his passes. The 19-year-old makes a lot of progressive runs to move the play forward. He can carry the ball forward and utilize his huge frame to shield the ball well in tight areas. 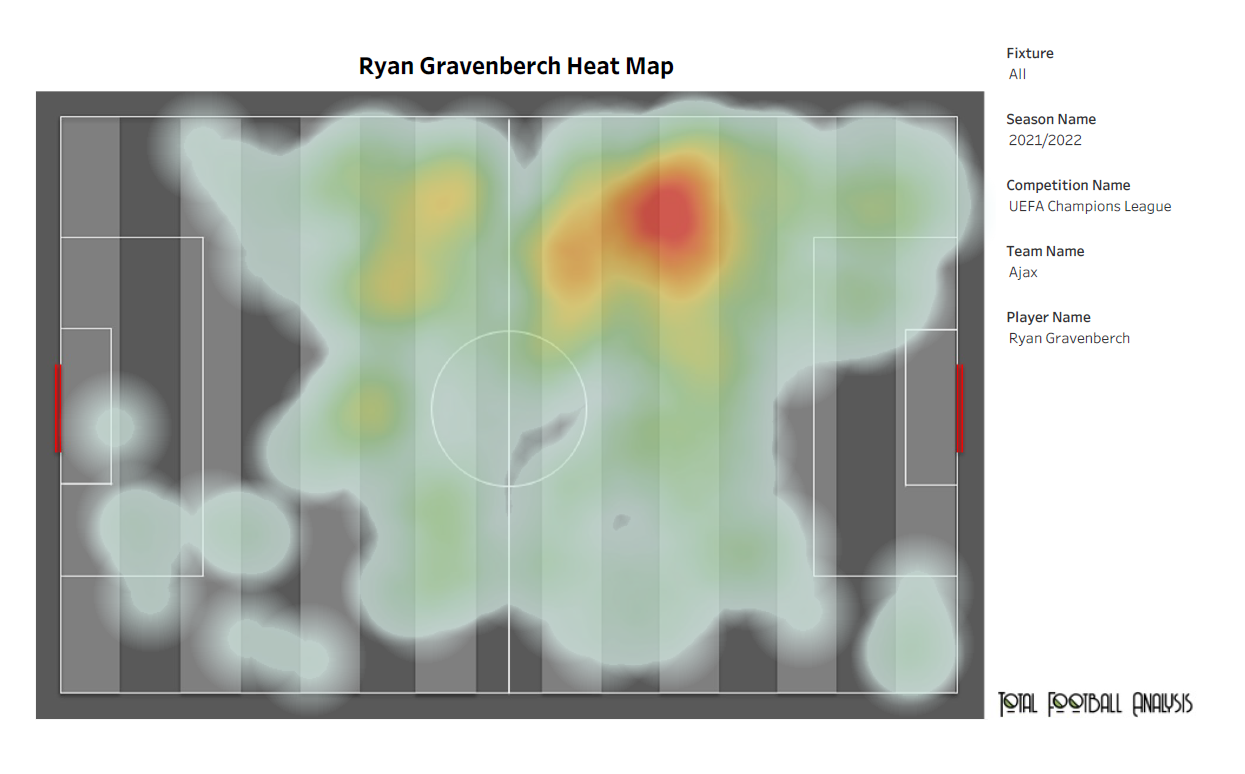 We can see the areas where the midfielder is most active in the above viz. The 19-year-old operates on the left side of the midfield pivot as a box-to-box midfielder. He often likes to drift wide and move towards the wide spaces on the left wing. We can see his presence in the half-spaces in the opponent’s half. Gravenberch often drops deep to aid his side during the build-up.

While it will be difficult for Ajax to hold on to the midfielder with limited time remaining on his deal and heavy interest shown by the top European clubs, Ajax hierarchy should make one final push to tie the midfielder to a new contract.

This Ajax player could be a World Cup phenomenon and United...