AFC Ajax has a rich history of raising talented children into skilled footballers. The youth players at De Toekomst are all taught to play with confidence, verve, and passion. Ajax’s youth academy has produced a plethora of defensive talents in recent years, most notably Matthijs de Ligt. Yet another Dutch defender has risen the club ranks quickly and, at the age of 18, is poised to break into the first-team. Without further ado, let’s cover Ajax’s promising left-back: Mitchel Bakker.

Mitchel Bakker has — like De Ligt — played virtually his entire youth career at Ajax Amsterdam. Bakker’s father, Edwin, featured briefly for Ajax in the 1980s as a winger before moving on to Groningen. Edwin may have failed to make a massive impact in Amsterdam, but his son, born in 2000, is well-positioned to play a role in De Godenzonen’sfuture.

Bakker has, on first glance, the physical profile of a centre-half. The blonde Dutchman is tall, stocky, and athletic. He certainly has played in the centre of defence during his youth career, but his skillset lends itself more towards the left flank. Mitchel Bakker is quick, both in terms of physical pace and in-match intelligence. Combine this with his good passing technique and you get a very competent left-back in a high-pressing, ball-playing-focused defensive line.

Mitchel played 15 times (over 1,000 minutes) for Jong Ajax — Dutch Second Division champions and Ajax’s second team — last season. For someone who only turned 18 after the season’s completion, this was a great accomplishment. However, some point to the fact that Ajax lacks depth in the left-back position which forced Jong Ajax coach Michael Reiziger to call up the Dutch youth international. But first-team manager Erik ten Hag’s decision to include Mitchel Bakker in his pre-season preparations hints at his great potential.

Argentine international Nicolas Tagliafico’s move to Ajax in January blocked any immediate progression by Mitchel Bakker into the first-team. In addition, creative midfielder Daley Sinkgraven has become a relatively competent left-back in recent seasons, but injury troubles have restricted his advancement as a player. Thus, Bakker was actually on the bench for twelve Eredivisie games near the end of last season but failed to make an appearance.

We Looked at the Data…

The Dutch Second Tier, referred to now as the Keuken Kampioen Divisie for sponsorship reasons, doesn’t have advanced statistics readily available. However, the data that is available for Jong Ajax backs up our preconceived assumptions about Mitchel Bakker. According to Wyscout, he completed 48.5 passes per match at an 85% success rate (Wyscout)*. This shows an extremely intense focus on Bakker during build-up play, as well as his ability to consistently complete passes.

Further up the pitch, Mitchel is once again involved quite a bit. He completed 3.5 crosses per match at a clip of 38.5% (Wyscout)*. While these are both genuinely great returns from a full-back, we must take into consideration that Jong Ajax dominated the ball in a lot of their matches and thus created lots of space in the final third for players like Mitchel Bakker.

Many high-level scouts note that data is not a great foundation for determining defensive competency. Thus, we’ll look at the rest of Mitchel Bakker’s ability through in-game footage, especially focusing on whether or not his passing is as good as the stats suggest.

Building from the Back

One of, if not, the most important roles of an Ajax full-back is their ability to further possession into the midfield. Whereas the centre-backs are often tasked with carrying the ball forward before falling back into a conservative position, the full-backs have the license to roam further forward.

Mitchel Bakker could be considered, when compared to other Ajax full-backs, quite defensive. He takes up a high starting position but often comes deep to receive a pass from the left-sided centre-back. Also, Bakker will roam into the deep left half-space to connect play between defence and midfield, something he has shown improvement during recent seasons. 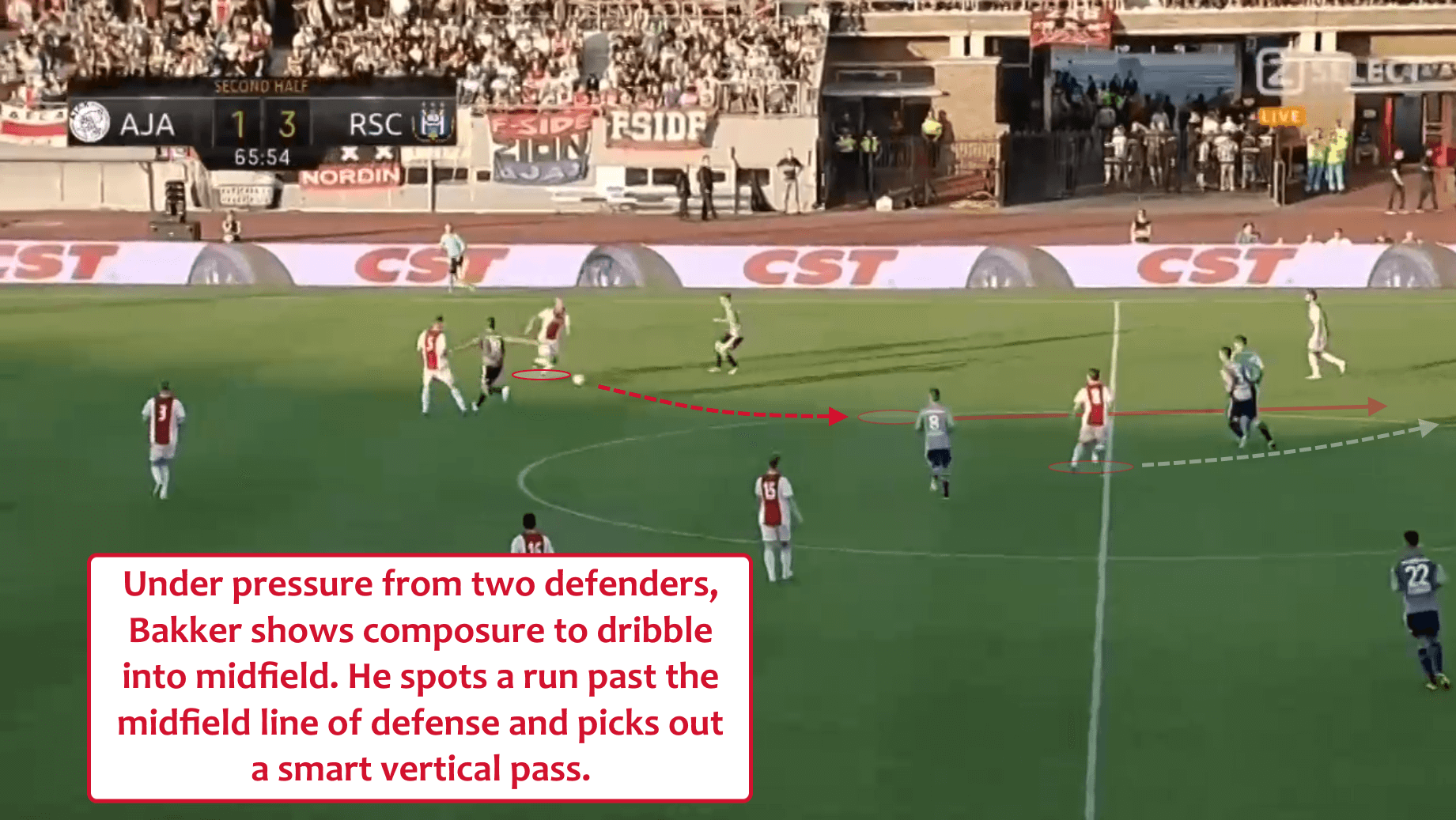 During the recent pre-season, Mitchel Bakker looked very confident on the ball. He quickly accelerates when pressed on both sides, evading Anderlecht’s first line of defence. Bakker shows intelligence and composure to retain possession and make a smart through-ball to a central midfielder.

When under less pressure, Bakker can show his speed and skill. He made many darting runs forward during the pre-season that originated deep and ended in the final third. 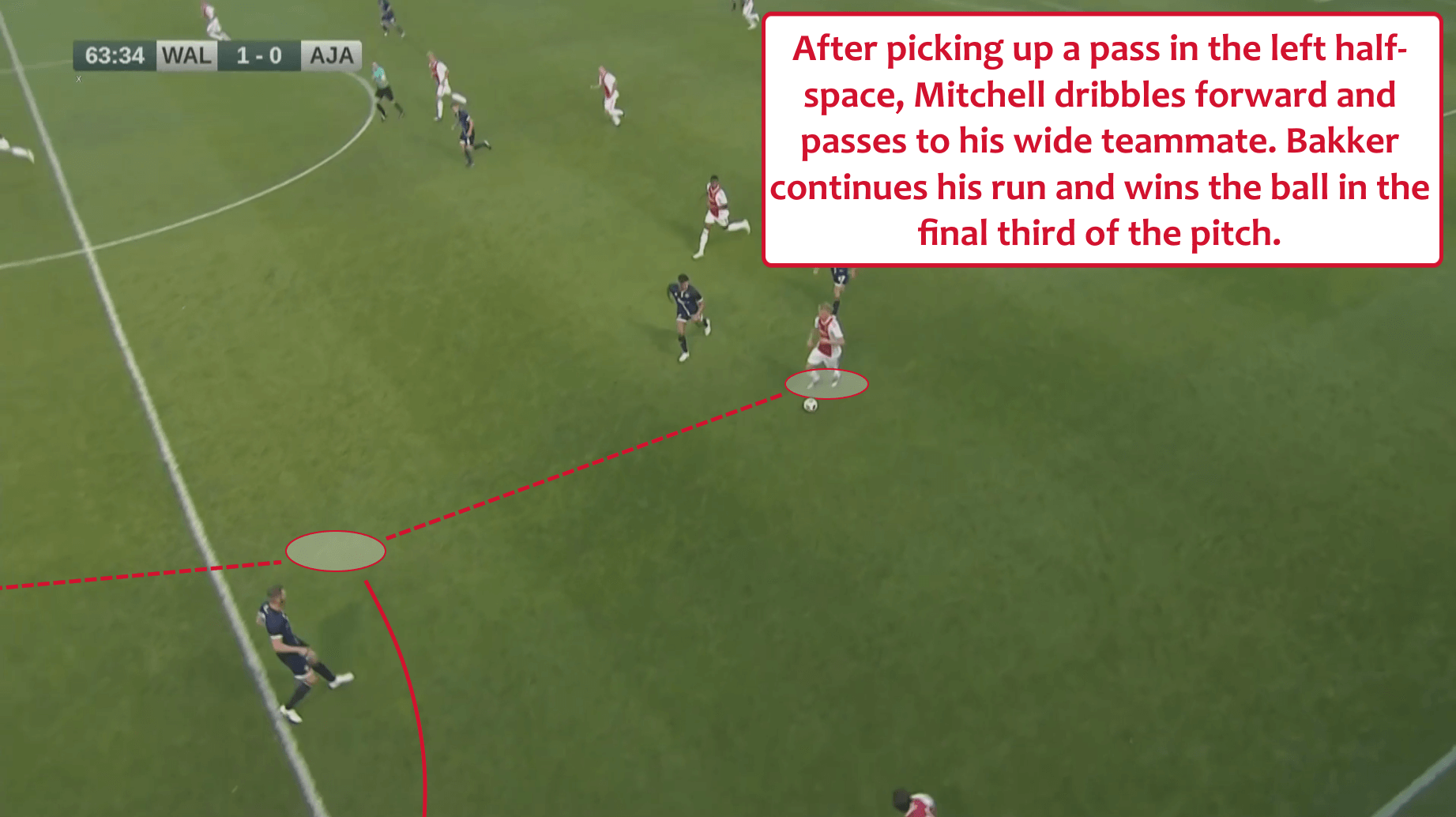 Once the ball gets to the midfield, Mitchel Bakker does a great job of making himself available for a pass. Yet, despite his positional intelligence, his overreliance on his left foot makes him limited in his passing and attacking capability. Sometimes the defender will close Bakker down and force him to make a dangerous backpass or lay-off when he could just dribble onto his right foot. 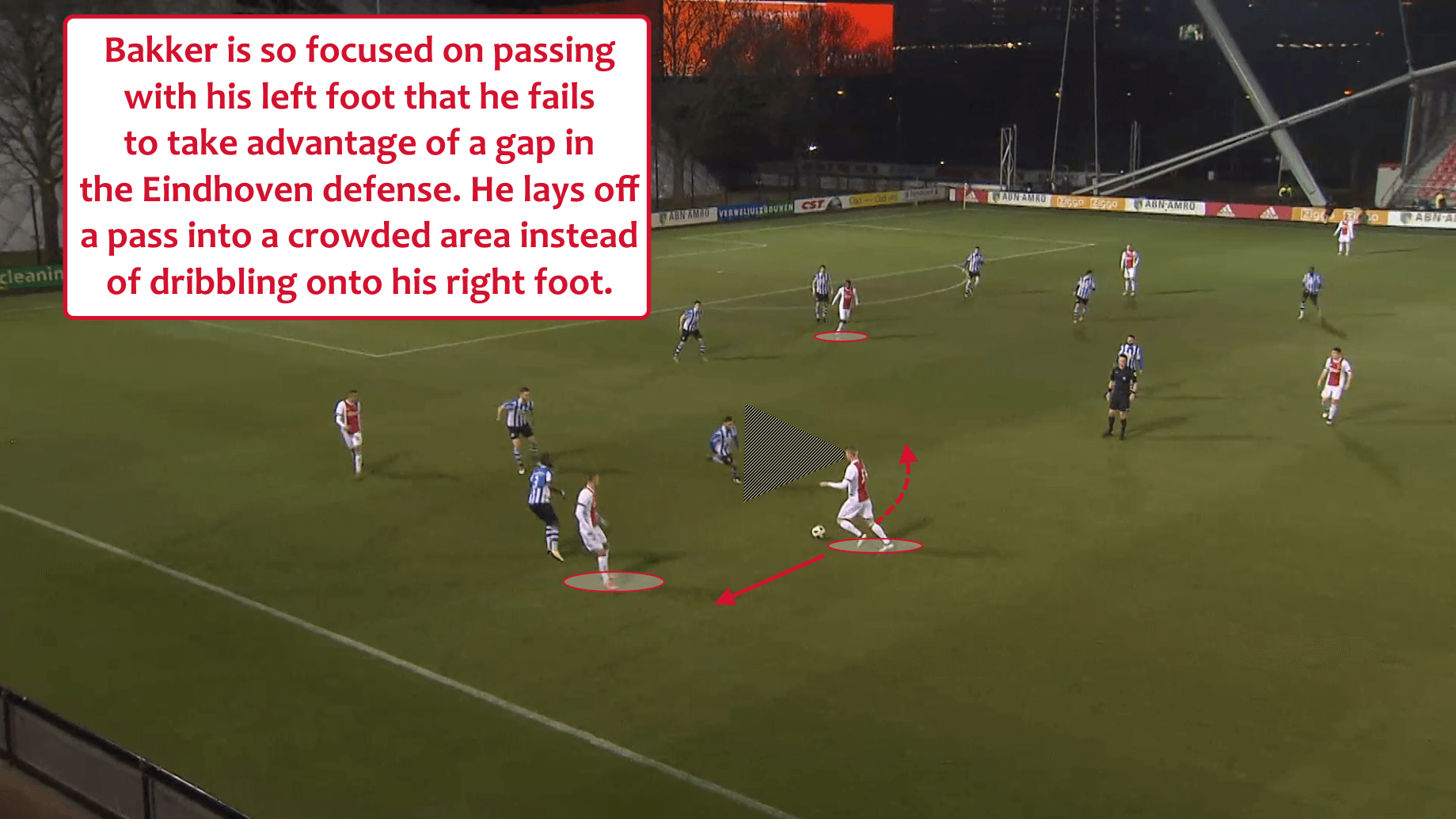 While his one-footedness is certainly a thing to improve upon, Bakker’s overall link-up play is great. He does a good job of opening his body up for a pass, makes smart runs into space, and generally has a great first touch. Bakker can be anything from an intelligent playmaker on the left flank to a helpful pressure-reliever. 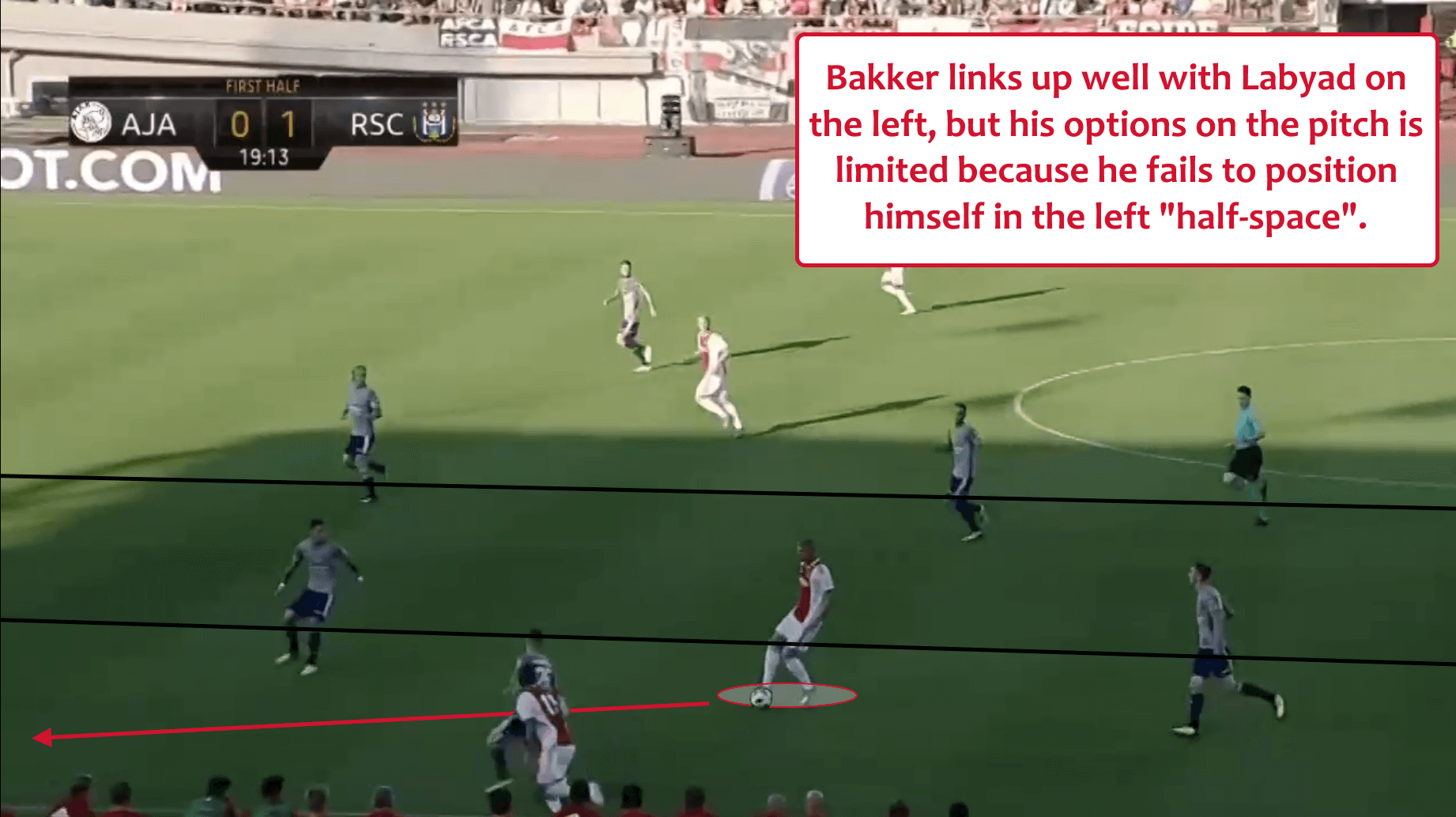 Mitchel Bakker sometimes remains in the midfield as Ajax go forward, but his runs into the final third provide width and help to spread out the attack. In addition, his usefulness as an “inverted full-back” was seen many times during the pre-season with the first-team. 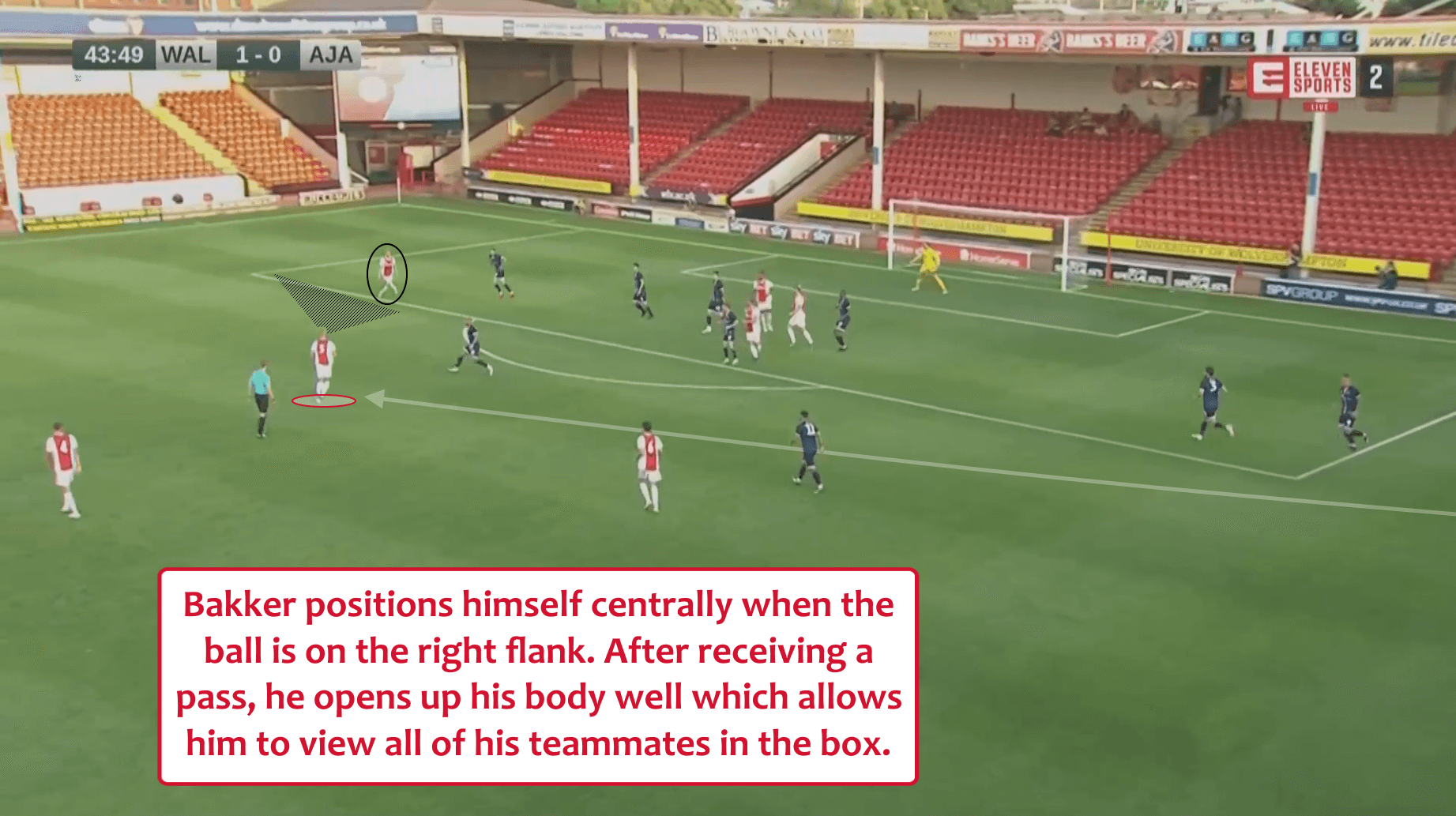 With the ball on the right flank, Bakker will sometimes drift inside towards the centre of the pitch. While first-team left-back Tagliafico often remains wide in this scenario, Mitchel’s ambition in this sense is admirable. Against Walsall in the pre-season, Bakker received a pass outside the opponent’s box. In a matter of seconds, the ball was transferred from the right flank to the left side of the 16-yard box because of Bakker’s positioning.

Ajax often play with a fluid attack. This is great for someone like Mitchel Bakker, who takes his chances to go forward when given. Again against Walsall, Ajax’s midfielders and attackers would cut inside and look for interplay down the flank and in the middle. Below, we see how an inward pass gives space for Bakker to run into and receive a pass in a dangerous position. 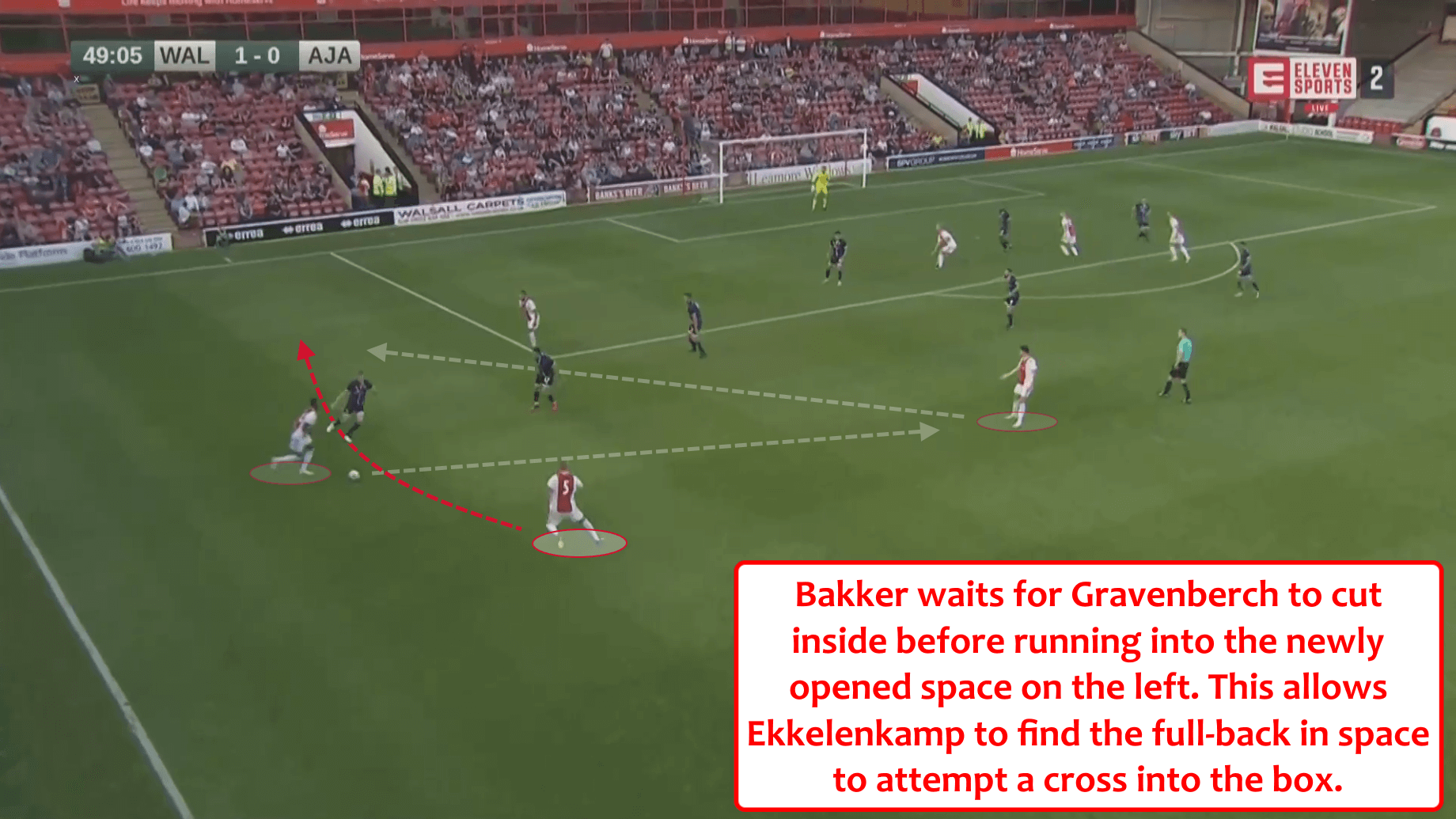 Mitchel Bakker probably won’t provide a plethora of assists from this position, but his presence alone should stretch out the defence. When a full-back is forced to commit to an overlapping player, the rest of the defence is forced to shift and adapt. This forces opposing defenders into mistakes, something that Ajax are very good at exploiting.

We now shift our focus to Mitchel Bakker’s strengths and weaknesses when out of possession. Everyone is aware that Ajax play a very high-pressing defensive system. Especially when implemented as a man-to-man press, the defenders are forced to play high and anticipate potential mistakes. Bakker seems to be the perfect full-back for this style of defence. 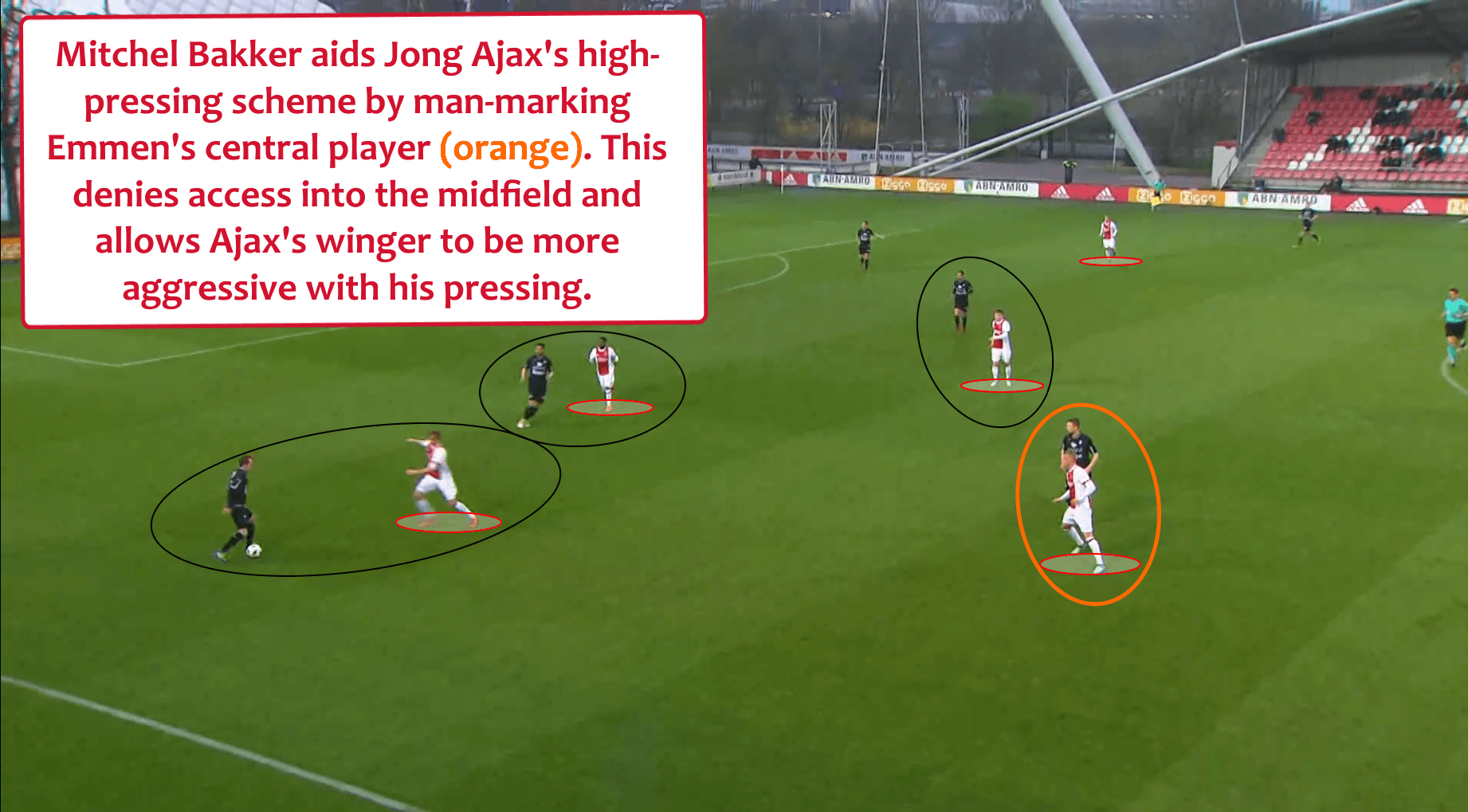 It was previously mentioned that the Dutchman is a physical specimen, meaning he should do well against better opposition in aerial challenges and foot races. But I believe his work away from the ball defensively can translate exceptionally to the Eredivisie as well. Against Emmen this year, Bakker pressed up close to the opposing midfielder and did well to cut off a potential passing option.

That being said, there have been moments in matches where Bakker has failed to tackle an opponent properly. Sometimes this leads to breakaways, which are extremely costly at the highest level. Mitchel Bakker is physical and certainly doesn’t coward away from challenges, but his individual marking should be worked on.

Mitchel Bakker’s greatest strength is perhaps his physical fitness. This strength definitely helps him cover for teammates and recover from errant challenges/positioning. 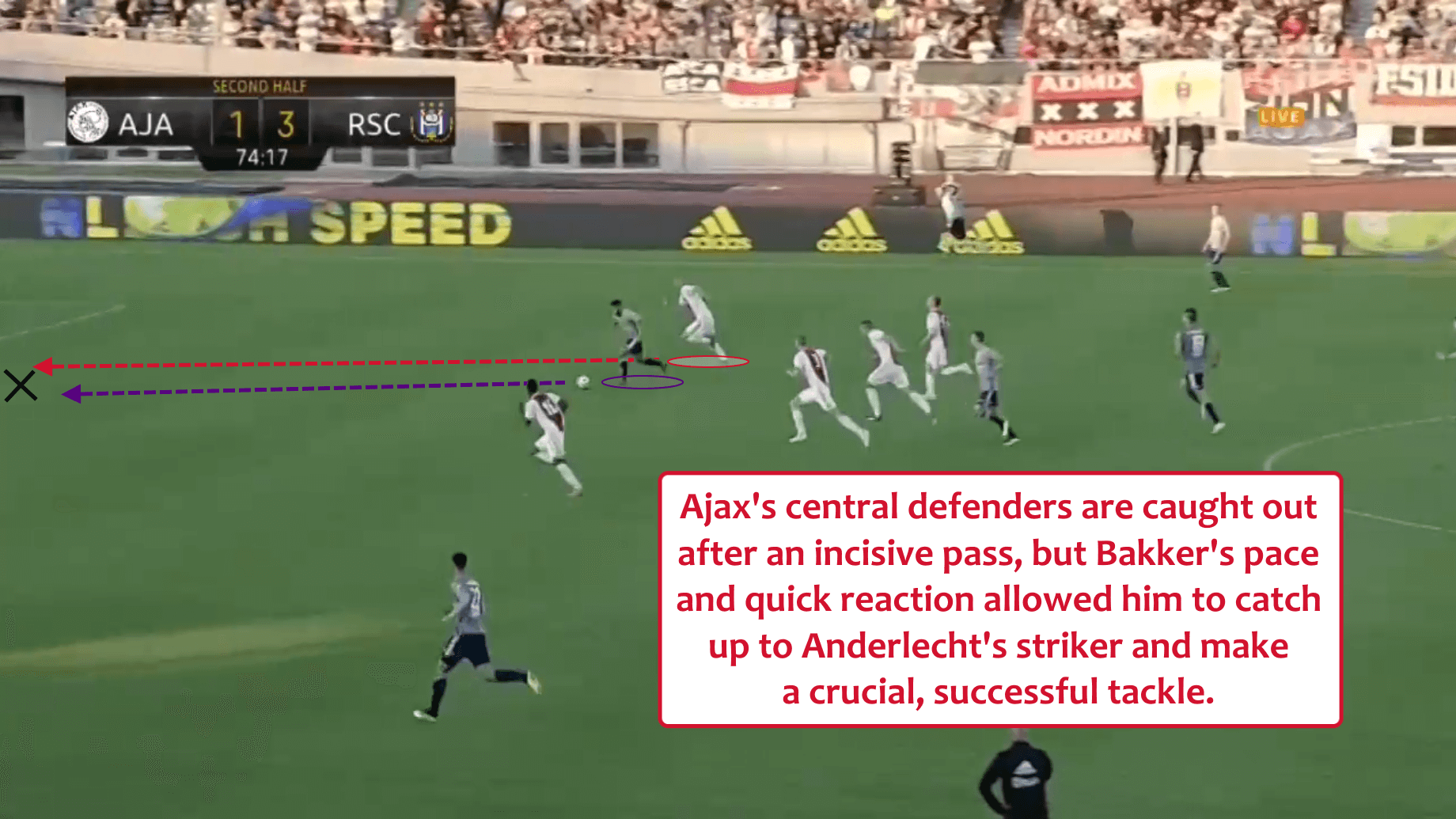 In the previously mentioned high-pressing system, the opposition will create space in front of the last line of defence. This happened a lot against Anderlecht this summer, with one instance forcing both centre-backs to step out of line. A ball was fed behind the lines, but Bakker was quick and strong enough to kill the attack with a 1v1 challenge.

Going forward, Bakker seems to be quite intelligent. His understanding of space is great, which surely resulted from his time in the Ajax academy. Tracking back, though, he has shown cracks in an otherwise well-rounded game. 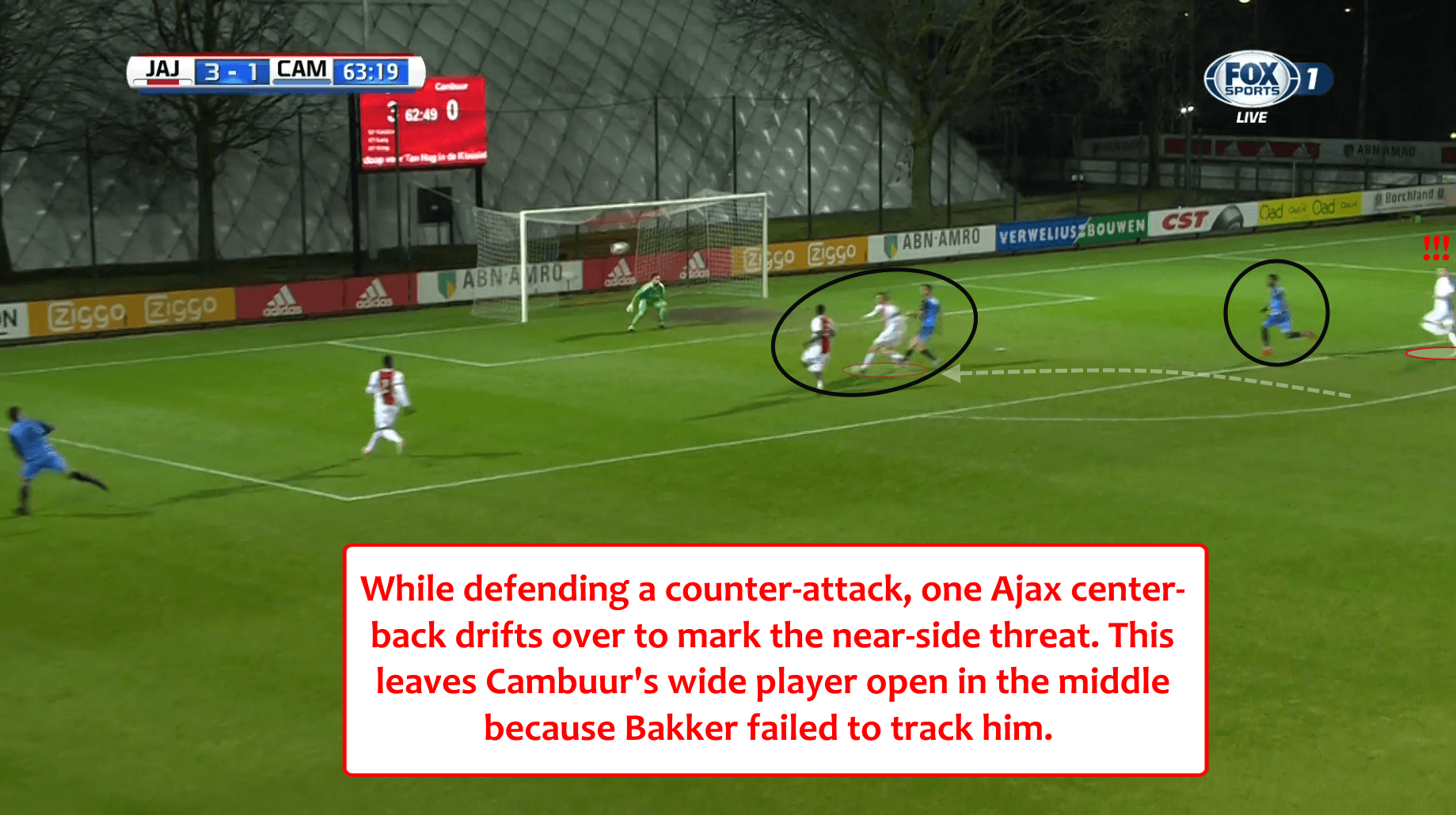 As mentioned before, Ajax’s centre-backs often have to step out or move out of position to cover. This is the inherent risk of a high-tempo system; once one player moves out of position, everyone must shift. Unfortunately, Mitchel Bakker fails to shift in the above example, which leads to an open header.

Mitchel Bakker is a strong, poised left-back with vast experience in Ajax’s youth ranks. Despite his young age of 18, the Netherlands Under-18 international is on the verge of breaking into the first-team squad and should start most matches for Jong Ajax this season.

Bakker’s strengths lie in moments of athleticism (recovery tackles, overlaps on the wing) and in link-up play. Questions have been posed of his defensive capabilities, but it’s not outlandish to predict the ironing of these wrinkles within a few seasons. Bakker’s speed, strength, and intelligence will make him a great backup option in the near future.

Nicolas Tagliafico has a virtual monopoly over the left-back position. He’s only 25, so the only possibility of the Argentine losing his place is through injury or transfer. In addition, Daley Sinkgraven has shown a propensity to play the role, as has central defender Maximilian Wöber. For now, Mitchel Bakker’s furthest ambitions can be the bench of the first-team.

But let’s not get ahead of ourselves. Bakker is yet to play more than 1,200 minutes in the Keuken Kampioen Divisie, nevermind the Dutch first tier. We can hope for a successful season with Jong Ajax as Bakker continues to develop his game on both the defensive and offensive side of the pitch. If Tagliafico is sold within the next two or three years, a more experienced and improved Mitchel Bakker would not be a bad option for Ajax’s starting eleven.

Transfer Talk: Calvin Bassey – Could the versatile defender create his...