This analysis for Frenkie de Jong originally featured on totalfootballanalysis.com

Although the Netherlands is a really small country with 17 million citizens they were the birthplace of a lot of great footballers like Johan Cruyff, Frank Rijkaard, Marco van Basten or Edwin van der Saar. In recent years the national team and the whole Dutch football struggled for the first time. They could qualify neither for the European championship in France nor for the World Cup in Russia. And also, in European football, there are less and less Dutch players who play for the best teams. But there is light at the end of the tunnel. With Frenkie de Jong and Matthijs de Ligt, the Netherlands have great prospects both playing for Ajax Amsterdam. Ajax Amsterdam had always great talents, with de Jong they have the next player who could move to one of the biggest European clubs.

In this piece, I am going to analyse Frenkie de Jong who is probably a type of player you never watched play. With only 21-years he already attracted attention from the biggest clubs in Europe. In the first place, it is Barcelona who is really interested in signing him in the next transfer period. The thing with Frenkie de Jong is that you can´t say if he is a defensive midfielder, deep-lying playmaker, a box-to-box midfielder or a centre back. He can just play every position and fills every position with his unique skill-set. Actually, we maybe have to invent a new position for Frenkie de Jong because he doesn´t really fit the criteria’s of our common positions.

Over the course of the last decade, the football evolved pretty fast. Teams nowadays have perfect athletic conditions and defending compact is more a standard than an exception. That’s why teams are less and less taking risks because they are too afraid of conceding a goal. Consequently, you rarely see players dribble in their own half. With Frenkie de Jong this is different.

The young Ajax boy loves to dribble. If you have to characterize de Jong with one action you should probably pick his dribbling´s over 50 meters from Ajax Amsterdam´s own goal into the half of the opponent. Those dribbling´s set him apart from other youngsters in Europe and makes him such a special player-type.

But, Frenkie de Jong´s dribbling´s aren´t just pure risk. They seem to be always the best choice in that specific situation. Because de Jong seems to weight the value of every action carefully. His action´s more or less always make sense and help his team progressing the ball into the final third. You can rarely observe de Jong playing a simple four meters pass because he just loves to solve such situations with clever dribbling´s. 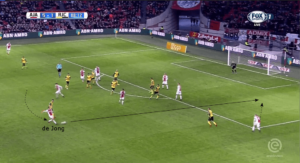 As I mentioned, Frenkie de Jong sometimes even plays as a centre-back. In that position, his abilities are extremely valuable to overcome the first line of pressing.

For instance, he receives the ball from Blind and recognizes the space behind AEK´s midfielder who pushes out of position in order to press de Jong. His first touch is already perfect because he destabilizes the defender. Furthermore, the dribbling of de Jong makes perfect sense in that situation. If he would just pass the ball back to Daley Blind, then the defender would get pressed quickly by AEK.

With his dribbling, he changes the whole dynamic of the situation and Ajax can start an attack instead of having to play a long ball under pressure.

His numbers show the strength of de Jong´s dribblings. Because of his high football IQ and his technique, he rarely loses the ball.

Here you can see his dribbling-percentage at each position

But not only as a centre-back but also as a midfielder he loves to move deeper and get the ball from the defenders to start his dribbling´s. That’s why you can´t press him in one positional description. De Jong just plays his way no matter where he is on the pitch or at which position he plays. 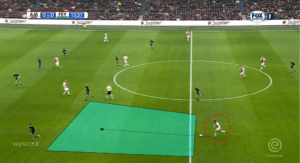 Here, he receives the ball in the left halfspace. The defence doesn´t cover the space and Frenkie de Jong starts one of his dangerous dribbling´s. The opponent has to either attack de Jong up or leave the space uncovered. With one dribbling de Jong let the defence collapse. 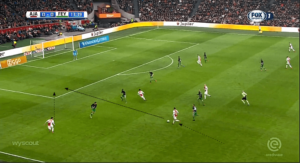 Besides his dribbling´s de Jong also possesses great passing abilities. No matter if he has to play through-balls, long passes or chips behind the defensive line. De Jong has all sorts of difficult risky passes in his repertoire.

Master of the through-ball

Through-balls aren´t easy to play and only the best can do this constantly. The reason? You not only need great technical abilities, but you also have to observe the movements perfectly and have the feeling of when to play the pass. 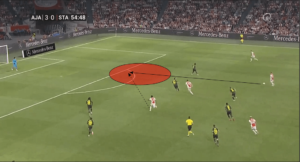 In the end, timing and precision are important. Frenkie de Jong has it all. He plays with such great intuition that he constantly is capable of delivering great passes to his teammates.

Still, those smart passes are hard to play. Consequently, the rate of success isn´t the highest on those passes but de Jong masters to play those difficult passes with a high number of accuracy. 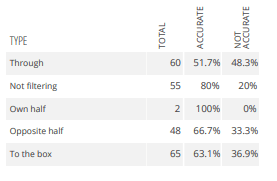 Along with his dribbling´s, his through-balls represent a real threat for the opponent´s defence. Usually, Frenkie de Jong opens space while running with the ball. Consequently, the defence has to react to his movements and tries to press him. As a result, his teammates get overlooked regularly and de Jong can feet them with his passes.

The way Frenkie de Jong advances with the ball takes advantage of the man-oriented pressing of most Dutch teams. Due to extreme man-orientations bigger spaces logically appear in the centre. With his dribbling´s de Jong attacks those spaces. In the following example, he again starts his run from deep and attacks the red-marked space. 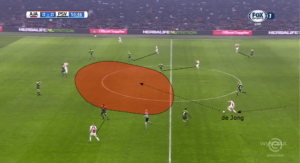 As I mentioned above, the man-orientations cause a critical decision for each defender. Should I still focus on my opponent or start pressing de Jong? Most of the time they will attack de Jong but lose the focus on their own opponent. 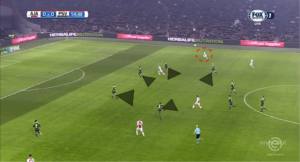 Frenkie de Jong just dribbles through the central space and all defenders have to adjust their position and change their focus. Just be aware of the right winger of Ajax Amsterdam (marked red) he will profit from de Jong´s dribbling in a few seconds. His blind-side run is just possible because of de Jong. 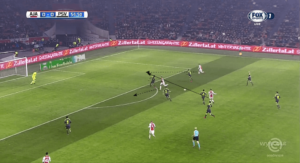 In the end, the winger can sprint into the box with the defender focusing more on the ball than him. Still, the timing and precision with which de Jong plays the pass are just impressive and a clear indicator of his high IQ.

It seems like Frenkie de Jong would always think about breaking the next defensive line. He never takes the save route instead he tries to unbalance the defensive shape of the opponent by using his dribbling´s. Similar to the situation above where the winger is, in the end, unmarked, are a lot of situations which involve Frenkie de Jong. Especially, in midfield de Jong can create so much pressure with his dribbling that defender automatically forgets about their own opponent in order to stop de Jong. As a consequence, Ajax players just be unmarked regularly due to de Jong.

In the end, his dribbling´s create completely new situations. But not only his dribbling also his passes break the defence. We saw the through-balls above, they break the last defensive line. But Frenkie de Jong has even more to offer. He anticipates most pressing movements quickly and knows how to overplay them.

You can´t give him an inch of space because he can quickly make you pay with one of his incredible long passes. They have the accuracy of the passes of most defenders. The difference is that he creates immediate opportunities with those long balls. 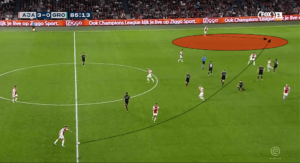 So, when the defence just concentrates on staying compact in the centre, de Jong can hit them with dangerous long balls into open space. As with the other actions he rarely chooses the easy pass rather he tries to bring his team in goalscoring opportunities.

Furthermore, de Jong´s off-ball movement is elite. It follows the same rules as his on-ball actions. It is all about creating space for himself and his teammates and to break down the defensive lines. Especially, in one of his rare moments of being a goal scorer, you can observe his intelligent positioning.

Here, he waited in a wider position to open the centre. Immediately, when the pass from the centre back to the striker got played he started his run. Because of his curved diagonal run, he is hard to stop and receives the ball while he was sprinting towards the goal which made him almost impossible to stop.

There are just so many examples of his high football IQ and his line-breaking actions. In terms of being dangerous in front of the goal, he has definite room to improve, however, those skills aren´t to most important ones for Frenkie de Jong. His other actions just make him so valuable for his teammates that using him in deeper zones probably makes more sense. Frenkie de Jong sees himself as a deep-lying playmaker in front of the back four. But as I said Frenkie de Jong is too unique to just say that he is a central midfielder.

Clearly, Frenkie de Jong is one of the most interesting talents in European football. But compared to other very talented players he doesn´t fit into one of the typical descriptions of a certain position. For de Jong you can´t find that one position.

He seems to be the next stage of development. In recent years coaches prefer players who can play at multiple positions like Joshua Kimmich. De Jong doesn´t have one position because he just plays the game the same way no matter if he is officially a centre-back or a central midfielder. His dribbling´s help his team no matter where he is playing. In the end, Frenkie de Jong will probably evolve into the next great Dutch player who has the potential to change the game.

Under the microscope: What does Dusan Tadic need to do to...