Ajax Amsterdam is repeatedly referred to worldwide as one of the more powerful “selling clubs”. When Justin Kluivert was sold to AS Roma this summer, that narrative became fresh again. However, sporting director Marc Overmars has taken the burden upon himself to improve the squad in an attempt to challenge for an Eredivisie title and in the Champions League Group Stage. The signings of Dušan Tadic and Daley Blind, as well as the emergence of youth player Noussair Mazraoui, promise to add much-needed star power and depth across the pitch.

Erik ten Hag was — probably unjustly — ridiculed by a portion of the Ajax support at the season’s inception. Ajax had advanced past Sturm Graz in the Champions League, but a 2-2 draw in Liége and a 1-1 draw against Heracles Almelo in the league did not meet expectations. However, the underlying statistics were promising. Ajax created 15 key passes against Heracles (WhoScored) and conceded via a low-percentage long-shot.

Results have improved ever since the squad has begun to gel together. Ajax surged past Standard Liége in the return leg 3-0 and managed wins over VVV-Venlo and FC Emmen domestically. Dynamo Kyiv posed a major roadblock on the route to the CL Group Stage but a 3-1 win at the Johan Cruijff Arena almost guaranteed qualification before the visit to Ukraine.

All of the names you’ve seen on Twitter over the past 18 months: Hakim Ziyech, Matthijs de Ligt, Frenkie de Jong, and David Neres have been instrumental to this success. It was a surprise to many when the transfer window passed and Ziyech had not left. Additionally, FC Barcelona‘s pursuit of De Ligt and De Jong has not swayed their performances in Amsterdam. But it’s the additions of Tadic, Blind, and Mazraoui that could turn a good season into a spectacular campaign.

Dušan Tadic: Shaking up the Status-Quo

Dušan Tadic’s arrival from Southampton was met with great applause from the Ajax faithful. The 29-year-old creative talent was once a player for Groningen and Twente in the Eredivisie, and his experience domestically will supplement his undeniable skill on the ball.

Already, Tadic has shown great cohesion with the likes of Ziyech, Neres, and Klaas-Jan Huntelaar. The Serbian’s 2.8 key passes per 90 minutes pales only in comparison to Ziyech, while his 2.8 shots per 90 have converted into three Eredivisie goals. Positionally, Check Out Epson printer Adjustment Program Serbia’s main attacking outlet at the World Cup has been playing in a wide role for Ten Hag. During a phenomenal 0-4 win against Vitesse, Erik ten Hag decided to shake things up tactically; winger David Neres was placed behind the striker while Tadic and Ziyech cut inside from the left and right flanks, respectively. 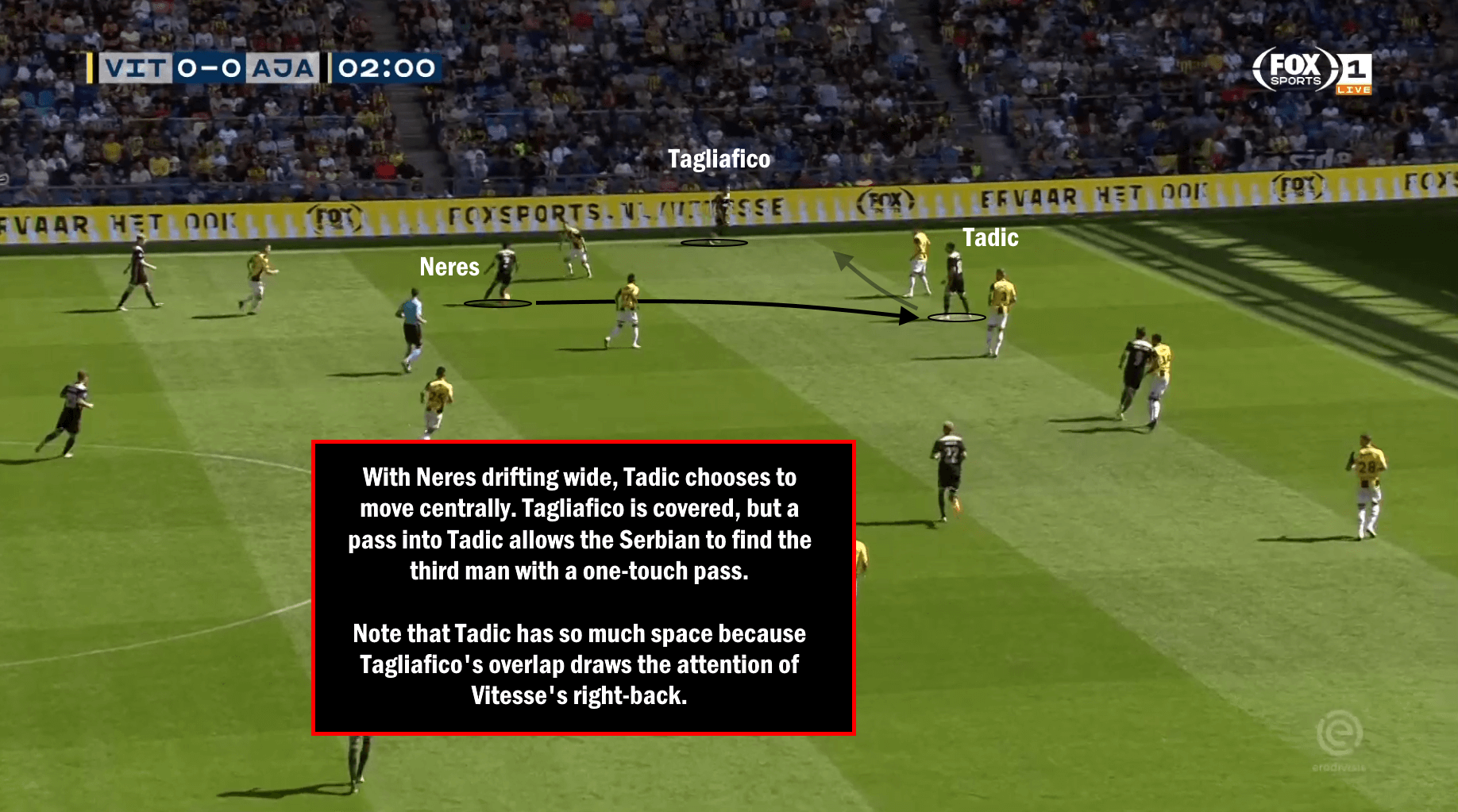 The Vitesse match gave us an interesting attacking setup; traditionally inverted-winger David Neres placed in an attacking midfield role, with Dušan Tadic and Hakim Ziyech on their weak-foot flanks. The possibilities for passing combinations with this lineup is endless, and Ajax definitely exploited this.

Since Neres has a tendency to drift wider, Tadic could take up a more central position between the lines. Luckily, his intelligence on the ball definitely translates to his movement off the ball. Instead of acting as the main creative outlet, Tadic waited for the play to come to him. The likes of Frenkie de Jong, Neres, and to an extent Ziyech all did the legwork, so Tadic could save his energy for movement in the final third. 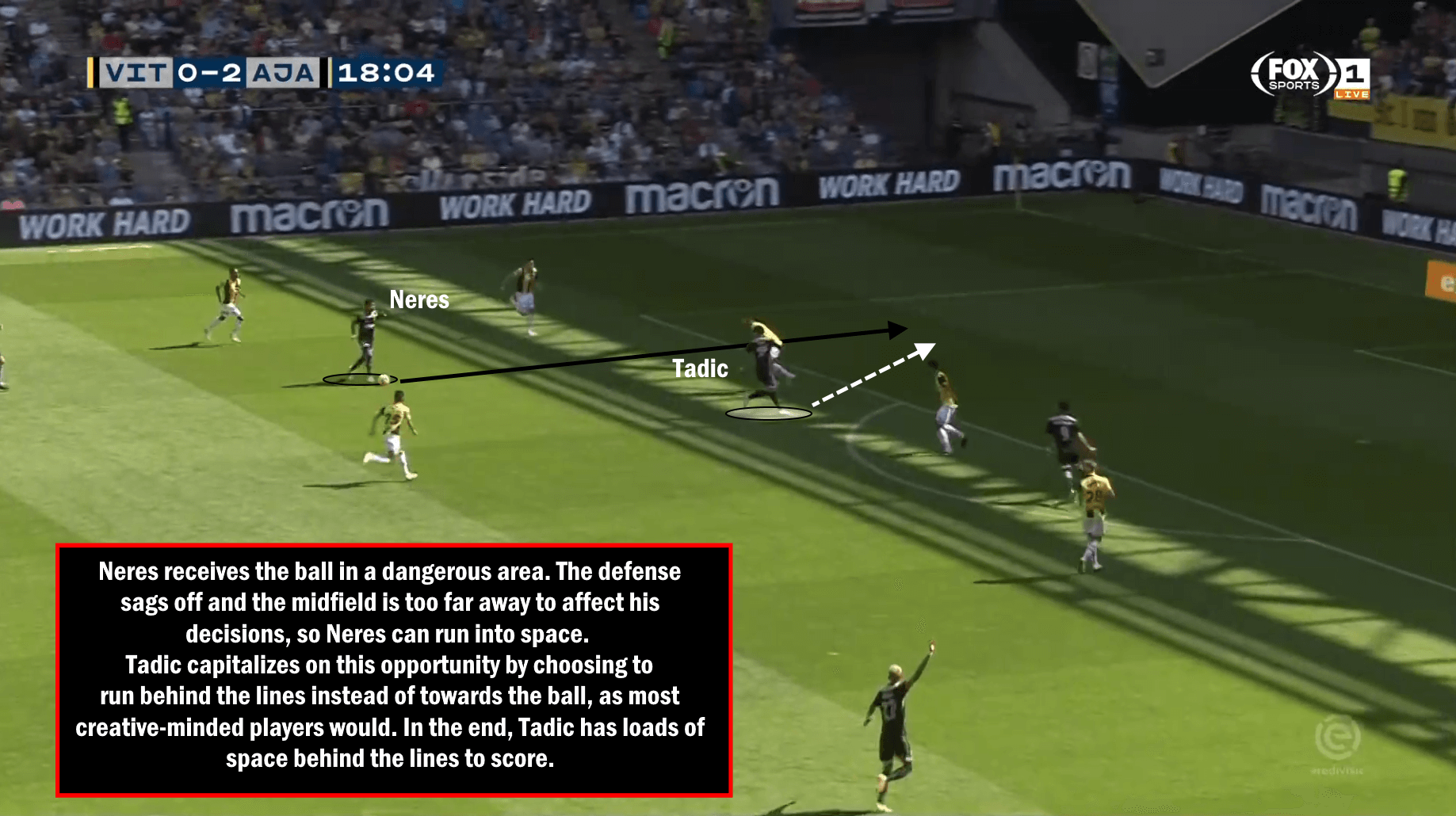 Tadic’s ability to roam effectively between members of the opposition back four is not only great for receiving the ball in space. This season, the Serbian has been thriving when receiving balls in behind. Whether out wide (ending with a cross) or closer to goal (as seen above, ending in a shot or dangerous pass), Tadic has been very effective when linking up behind the lines.

Noussair Mazraoui: From Zero to Hero

Last year, I wrote about Noussair Mazraoui only as a player with a bit of potential. However, in recent months the Moroccan/Dutch midfielder has transformed into Ajax’s most effective and dangerous right-back. The injury of Joel Veltman and the underperformances of other young defenders had burned a hole into the starting eleven. Mazraoui walked right into that hole and has been a standout performer this season.

Noussair Mazraoui, a recent debutant on the Moroccan national team, has been an Ajax youth player for quite some time. Even though Ajax didn’t purchase him this summer, his arrival in the first team has acted as somewhat of a new signing in itself. Nous’ athleticism and drive make him a great option for Erik ten Hag’s squad this season and for years to come.

As a full-back in a free-flowing attacking unit, Mazraoui is tasked with getting forward often. The defender is quite good at positioning himself well in the second third to help Ajax maintain good spacing and passing options. Mazraoui is comfortable charging high and wide on the right when the ball is being rotated, but he’s also good at coming inside and linking play centrally. 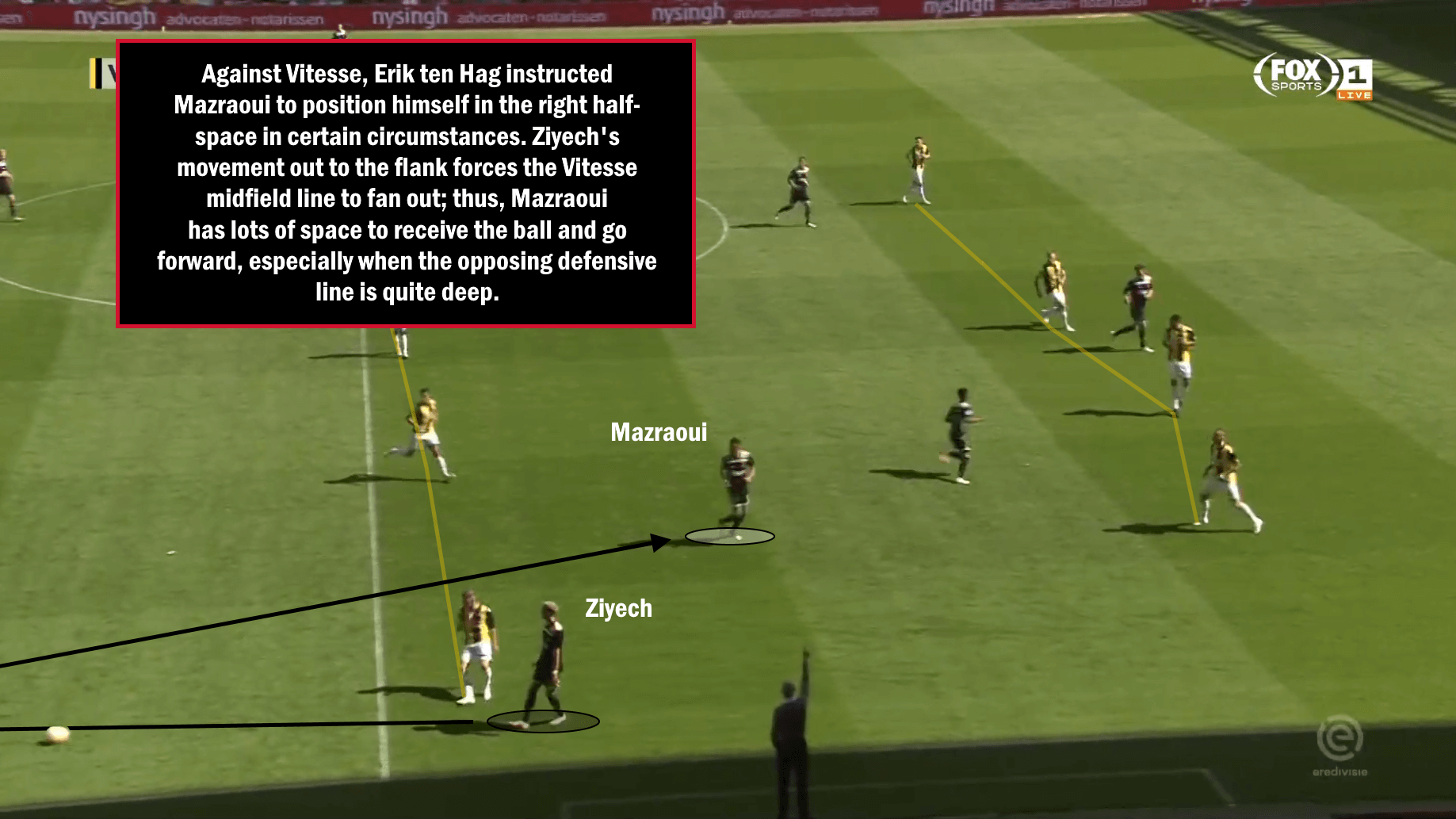 With the ball out wide, Noussair Mazraoui can dribble into space and send in whipping crosses at a pretty decent rate. He’s not phenomenal at getting past defenders, such as Real Madrid’s Marcelo or Manchester City’s Kyle Walker, but he can take advantage of space created by others.

Mazraoui will set himself in the right half-space when the right-sided player stays wide. In the case seen above, Ziyech and De Ligt (out of picture) play a one-two pass with Mazraoui as the third man. Since Vitesse are playing deep, Mazraoui’s great positioning between the vertical lines allows him to receive a simple pass with space to turn and dribble. If he’d stayed wide, the area would have been too congested and no passing option would have been available. 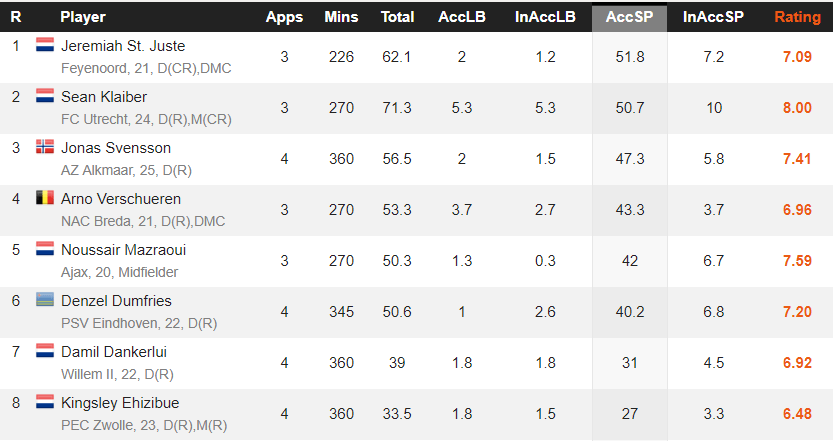 Noussair Mazraoui passes the eye-test when looking for an adequate Ajax full-back. But when looking at the statistics, we see that the lanky defender could do with some improvement. His defensive success rates are not very high, and thus far has been outshined by the likes of Jerry St. Juste and Jonas Svensson in terms of passing success (WhoScored).

Mazraoui is a great player, and the fact that Ajax developed him themselves makes his presence all the better. Joel Veltman received a lot of criticism over the past couple years and his injury has — for better or for worse — opened the gate for another player to change the dynamic of play on the right wing. Noussair Mazraoui has proven to be an adequate stand-in, but if Ajax are to advance past the group stages in the Champions League there will need to be some improvements to his game.

Daley Blind: The Final Piece to the Puzzle?

Tottenham Hotspur’s signing of Davinson Sanchez over one year ago took Ajax’s best performer of the season out of the team. For much of last season, there was no solid option to partner young defender Matthijs de Ligt, himself growing into a world-class centre-half. The signing of Daley Blind from Manchester United seems to be the replacement fans have sought ever since Sanchez departed for London.

Daley Blind is not as athletic as his defensive partner, nor is he as precise on the ball, but the Dutchman’s composure and skill have been on full display so far this season. Defensively, Blind is often assured of himself and capable of covering ground well. On the ball, he is a great short passer and is not afraid to carry possession into midfield. 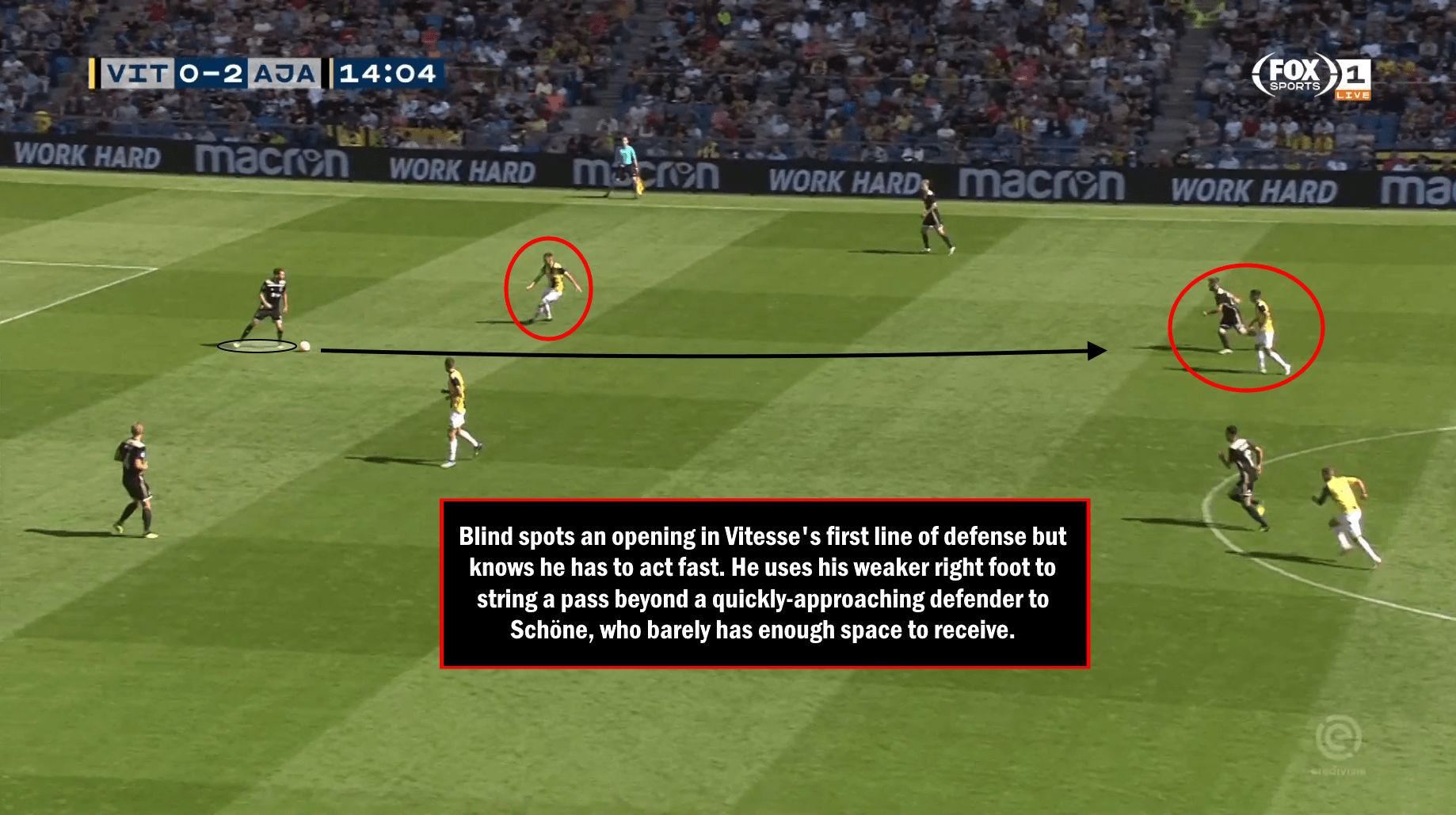 We can see above that Daley Blind is capable of taking advantage of small passing windows. Schöne is being tightly marked and another player is closing down the angle, but Blind is still able to pass accurately with his weak foot to relieve Vitesse’s pressure. Since Blind is often positioned slightly deeper than De Ligt, it is important that he is smart with the ball and able to turn risky sequences into build-up play advantages.

However, Blind has already shown moments of weakness on the ball. He sometimes becomes over eager when given space and, unlike De Ligt, has dribbled into traps that give the opposition a chance to counter-attack. But all in all, Blind’s deeper position often means he will make a simple pass to set himself up to defend a potential counter-attack in a great position.

Blind’s experience at left-back means he’s pretty good at covering for an overlapping Nicolas Tagliafico. When the Argentine is caught upfield when Ajax lose the ball, Blind has the wherewithal to cover ground and make a tackle. In the box, Blind has sometimes shown a lack of coordination but his partner De Ligt makes up for this by imposing his presence on set-pieces and dangerous crosses.

The talk around the cafés of Amsterdam is one of excitement. Ajax have assembled possibly the strongest squad the Netherlands has seen in years and a deep run in the Champions League is not out of the question. Dušan Tadic looks like a creative genius, one who can supplement Hakim Ziyech’s skill and erratic nature with poise and consistency. Noussair Mazraoui’s emergence from Ajax’s youth ranks adds depth and creativity to the right flank that Veltman could not offer. Daley Blind may prove to be the partner needed for Matthijs de Ligt in the centre of defence.

Ajax begin their Champions League group stage campaign this week against AEK Athens. Whether Erik ten Hag will maintain the intelligent, creative lineup is still up in the air. One thing that is certain is that the three players added to the first team this summer will make a difference.

How Donny van de Beek laid the platform for Ajax to...