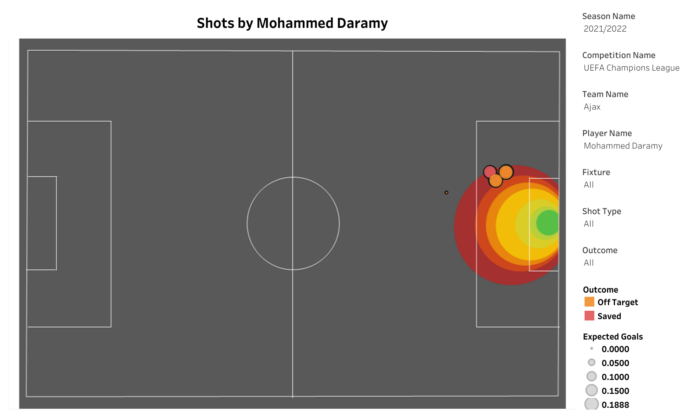 Ajax signed the Danish international player, Mohamed Daramy, from FC Copenhagen at the start of the 2021/22 season. Daramy joined FC Copenhagen’s academy as a U-14 player. He rose through the ranks and signed his first professional contract in 2019. He was in the main squad of the Danish club, and Ajax made a move for him last summer. The 20-year-old centre-forward got limited game-time in the team but scored some crucial goals to help his side win the Dutch Eredivisie title. He made 16 appearances for the Dutch side in all competitions and scored three goals along with three assists.

The Dutch side is facing a lot of problems as some of the players have already left the club and some others are on the verge of leaving the club before the end of the transfer window. Their striker, Sebastien Haller, has almost completed a move to the German side Borussia Dortmund. Ajax have been quiet in the transfer window and have few options in their squad. They would sign a forward in the coming days. This is one of the biggest opportunities for players like Daramy to step up after impressing the management with just a few minutes on the pitch. 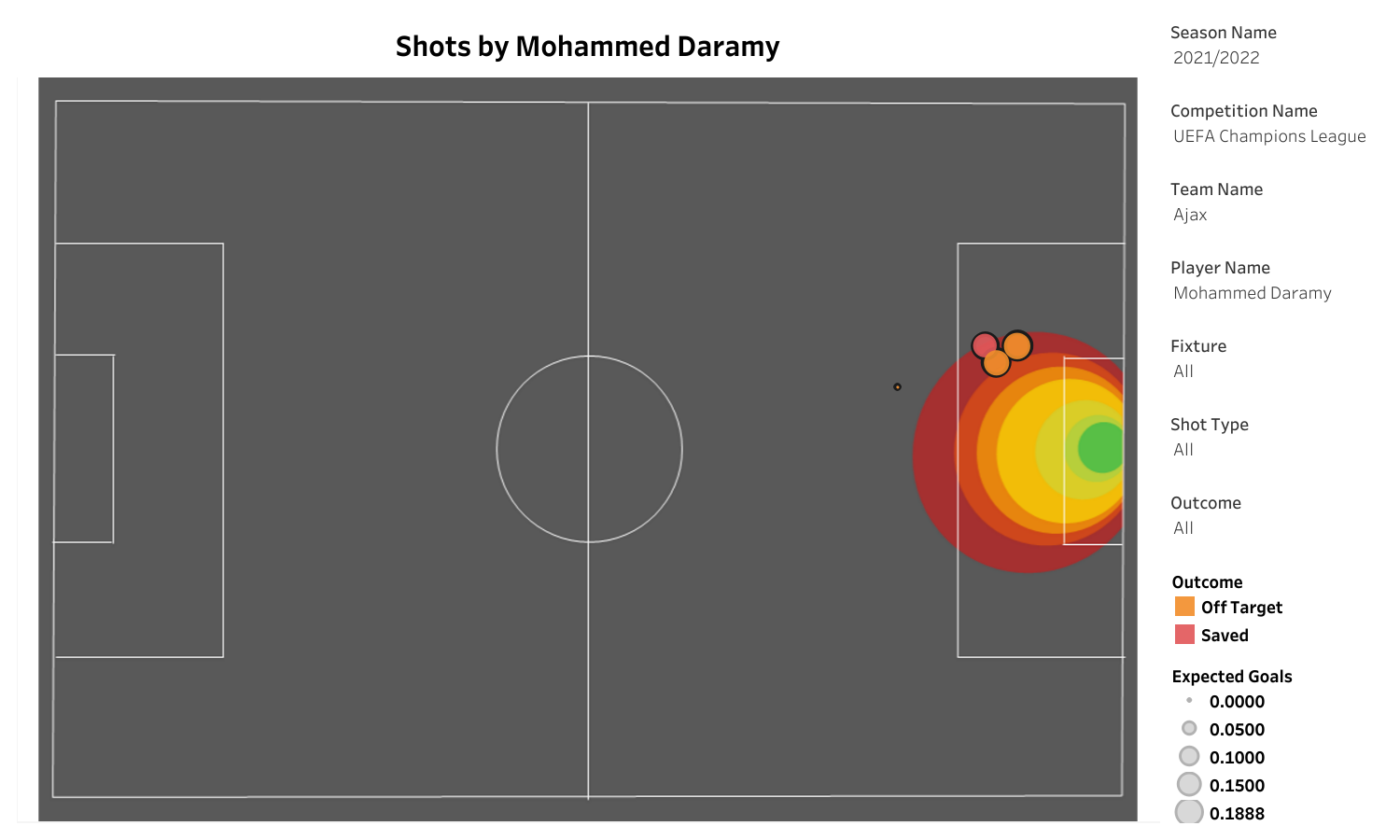 Daramy made two appearances for Ajax in the UEFA Champions League. He started in one match and came on as a substitute in the other. The forward featured on the left side for the Dutch side. He was unable to score a goal in the 57 minutes that he spent on the pitch. However, the player managed to attempt four shots against Beşiktaş in a game where he was given the first 45-minutes of the match to play. The striker hit the target once during the match. One of the most impressive stats about the youngster was that he attempted ten dribbles in these two appearances and had an 80% success rate. He even penetrated the opposition’s penalty box and took four touches inside it. This shows that Daramy has got the skills and pace to lead Ajax’s attack. 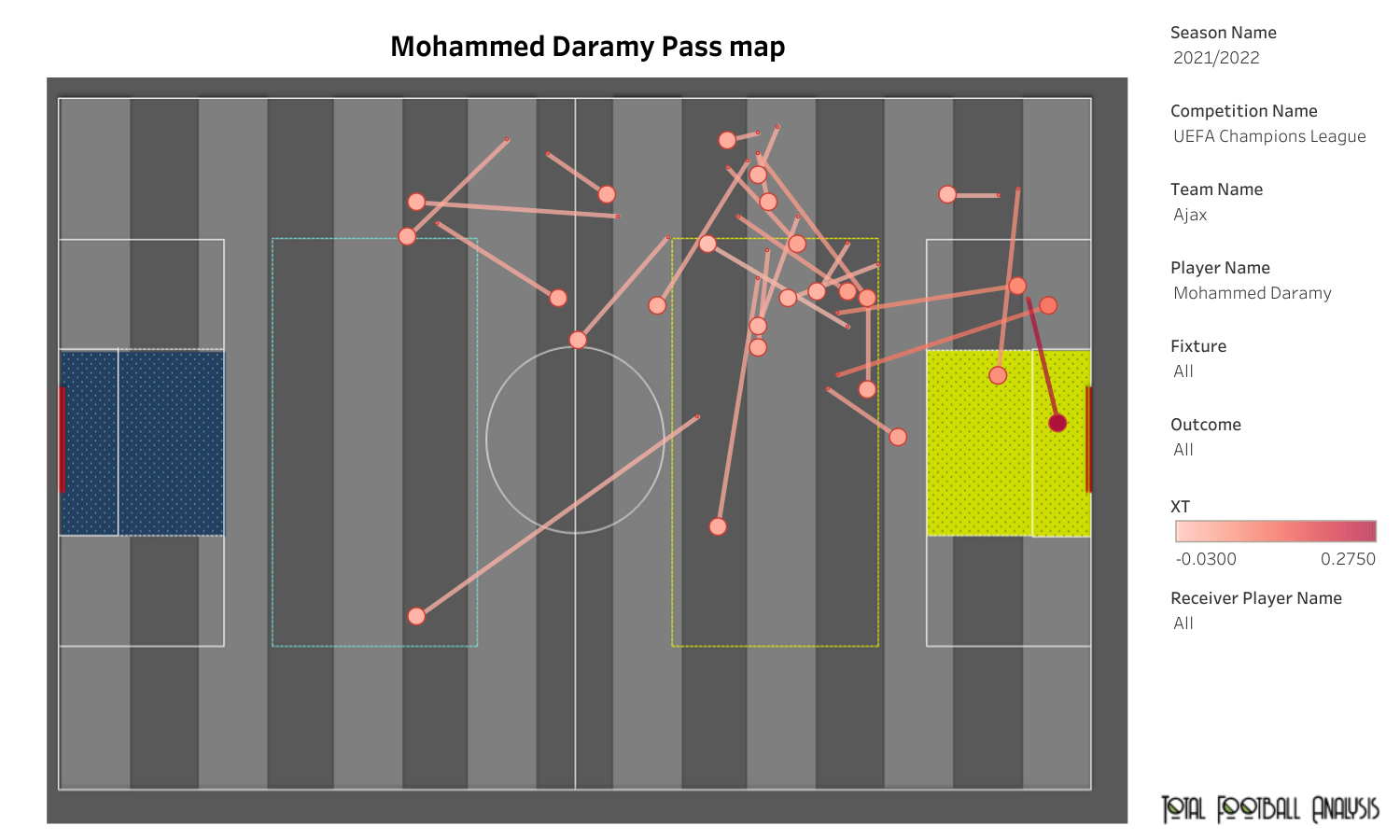 Daramy attempted 26 passes with an accuracy rate of 88.46%. The above viz shows all the passes that were attempted by the forward. These 26 passes included two crosses, one smart pass, and one through pass. The player even tried to find his teammates inside the penalty box.

The Danish striker could become the next big thing at Ajax. He has got the pace and skills to beat the opposition defence and could become a regular in the squad. The management will look to give him more game-time to help him groom and lead their side in the future.

Under the microscope: Reasons why Ajax should hold-on to the young...

How did Ajax dominate Real Madrid?

Under the microscope: Ajax bowing out of the Champions League –...