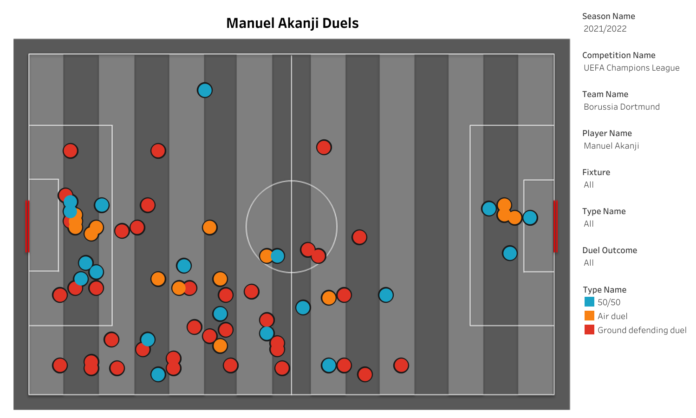 Manuel Akanji is likely to leave Borussia Dortmund following the signing of Niklas Süle and Nico Schlotterbeck. The Swiss international is now a fourth-choice centre-back and that will affect his game-time. He has chosen to move away from the club and is attracting the attention of a few other clubs. The 26-year-old was signed from Basel in 2018 and has been a regular since then for the German side. One of the teams that could make a move for the ball-playing defender is Ajax. The Dutch side are at the risk of losing Lisandro Martínez and would like to replace him with an experienced centre-back. Ajax won the Eredivisie and will be competing in the UEFA Champions League. A lot of reshuffles are going on in the camp, and the team needs to be at full strength before the commencement of the season. Manuel Akanji featured in every competition for Dortmund, and some of the stats below show why he could become a defensive leader at Ajax.

Akanji featured in 36 games for the German club and scored one goal. He made five appearances in the UEFA Champions League, but his team failed to qualify for the knockout stages of the competition. 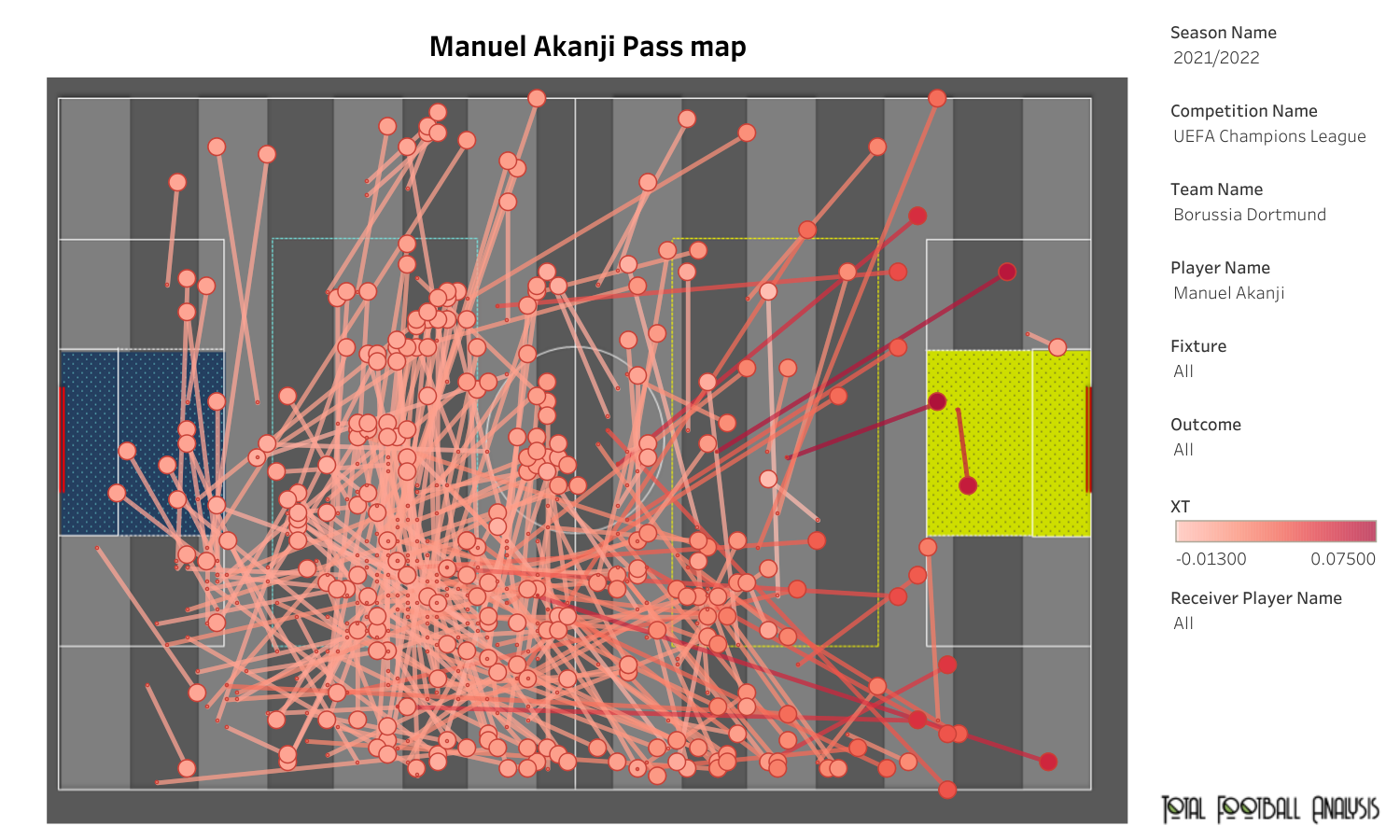 The above viz shows all the passes that were attempted by the defender in the UEFA Champions League last season. Akanji is very comfortable with the ball at his feet and averaged 52.6 passes per 90 minutes with an accuracy rate of 88%. These included 22 forward passes per 90 minutes. Akanji distributed a lot of passes towards the full-back, especially on the right side. He also attempted a few passes from deeper positions into the attacking third. This shows that the player is confident on the ball and can create plays from the back. 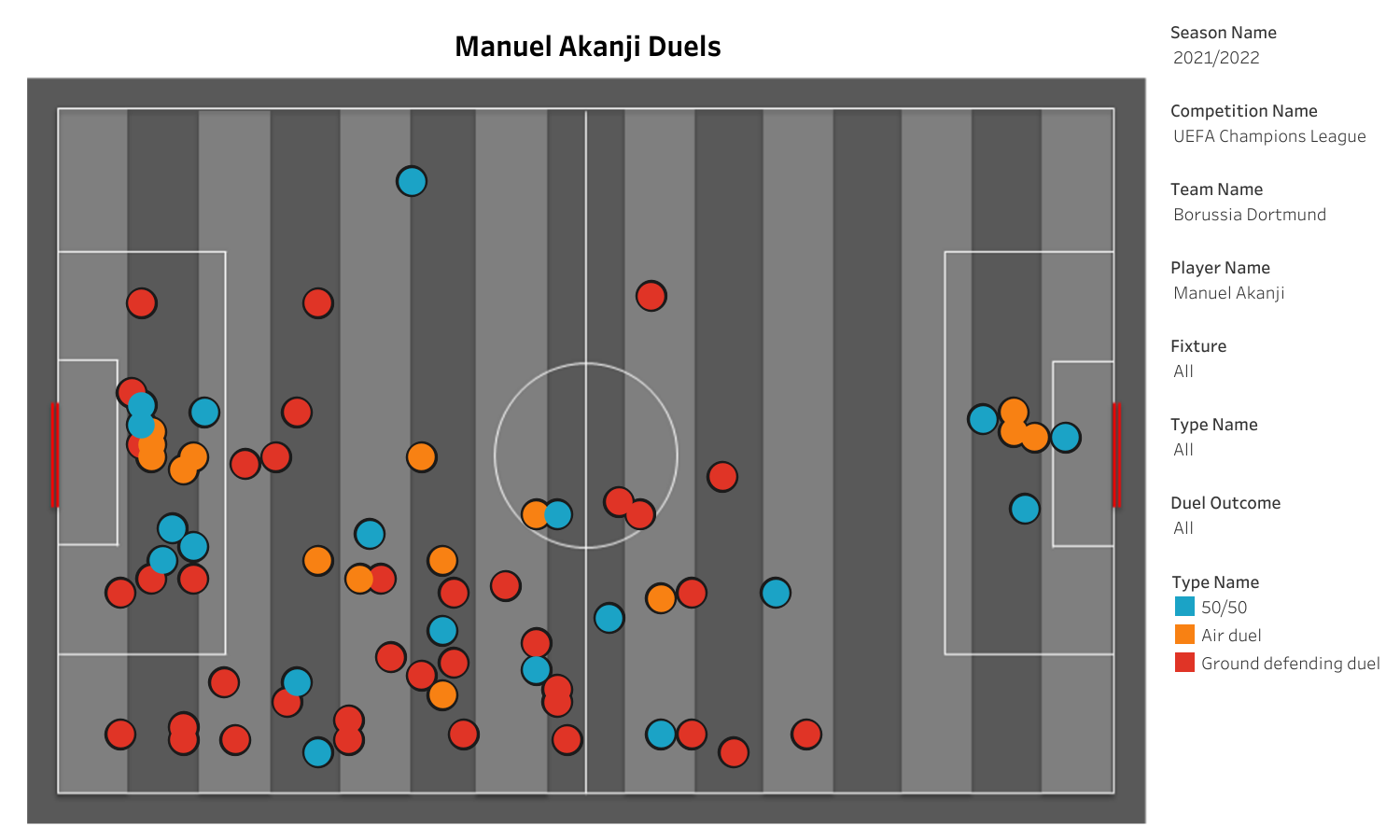 Akanji was involved in 12.27 defensive actions in the UEFA Champions League. One of the impressive stats about the player was that he won 98.5% of the defensive actions he contested. Akanji contested 6.88 defensive duels, 2.8 aerial duels, and 3.5 loose ball duels per 90 minutes. The defender won 32.45 of defensive duels, 46.68% of aerial duels, and 68.4% of loose ball duels. Most of the duels were contested in the defensive third and towards the right side. His other defensive contributions included 28 interceptions, of which half were intercepted passes and the other half were when other players were on the ball. Akanji also made 63 recoveries, of which nine were made inside the opposition’s half.

The above stats show that Akanji could become a defensive leader at Ajax. He has played football at the top level and is a regular player for his international side. Ajax are in search of players and Akanji could suit their style. The Dutch club is yet to make a move for the Swiss international.

Ajax vs Besiktas Preview: Goals per 90, forward passes and xT-...

Eredivisie 2018/19: How Ajax created a goal-fest in Amsterdam