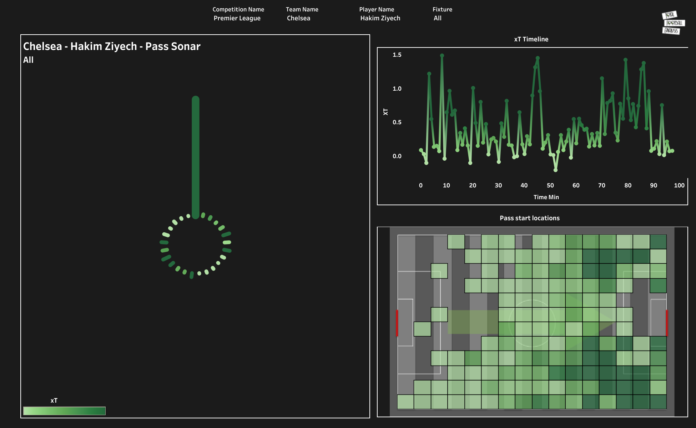 The English Premier League team, Chelsea, signed Moroccan international Hakim Ziyech from Ajax in 2020. He won the UEFA Champions League in his first season for the club. However, the player has got limited game-time and the Blues manager, Thomas Tuchel, is looking to offload the right-forward. Chelsea are open to offers for the player, and he is set for a move away from the Bridge. The player is up for availability and could be destined for anywhere. One place where he could once again end up playing is his former club, Ajax. The Dutch club will have a managerial change, and some of the players have left or are on the verge of leaving the club. The 29-year-old already has experience playing in the Dutch league and will bring a lot of experience to a young Ajax side. Here are some of the highlights from this season that suggest why Ajax should try to sign him.

Ziyech has made 23 appearances in the league this season and has scored four goals. The player was also involved in providing three assists. He featured in nine UEFA Champions League games and was involved in three goal-scoring contributions, which included one goal and two assists. 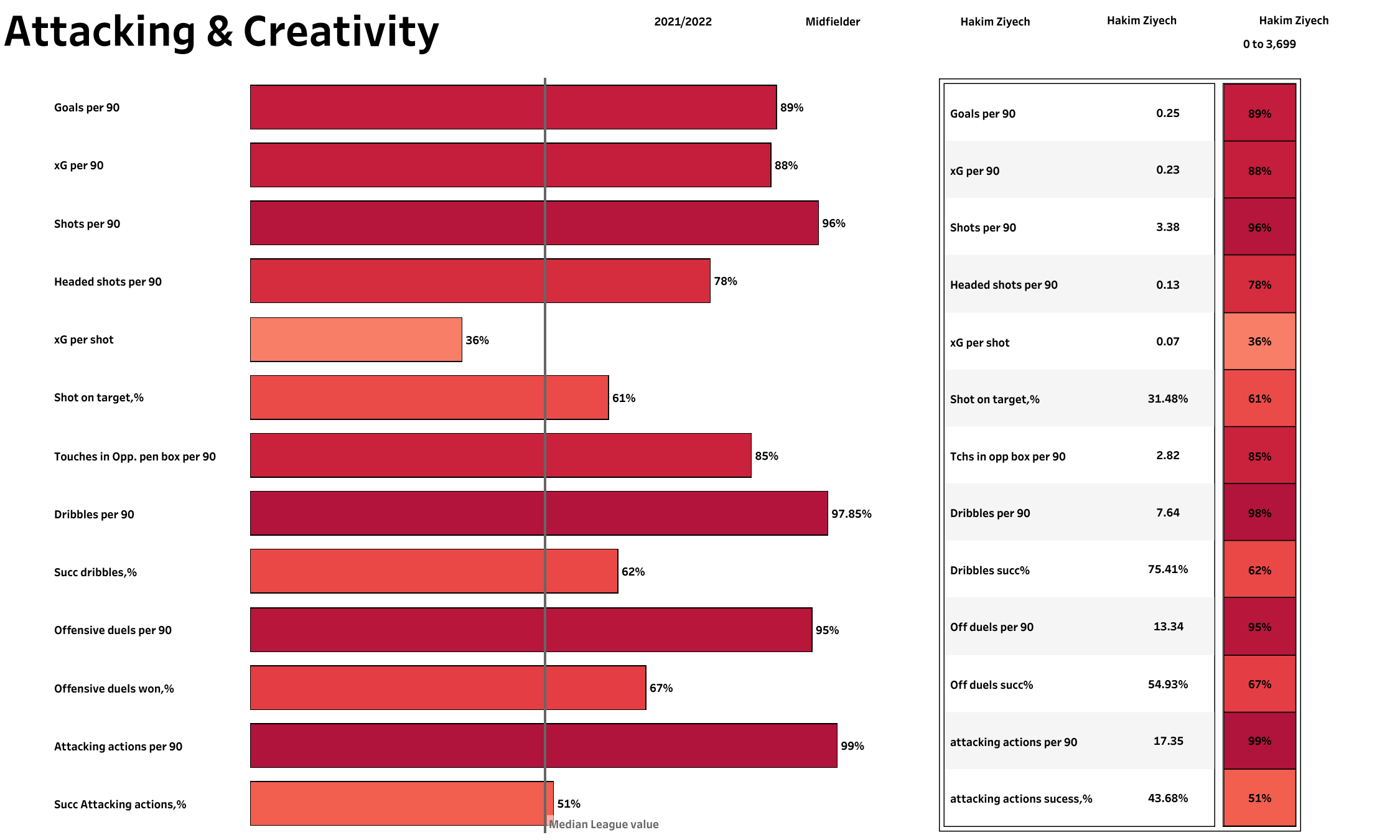 When looking at the above chart, the general rule is that the longer the bar, the better the performance — you can see the league average in the middle, and the % is the percentile rank the player is in. Hakim Ziyech had a high percentile rank amongst other midfielders in the league. He only ranked low for xG rate per shot. We can observe that Ziyech is a good dribbler of the ball. He averaged 7.64 dribbles per 90 minutes with a 75.41% success rate. Other than this, he was involved in more than 17 attacking actions and was one of the most creative midfielders in the league throughout the season. 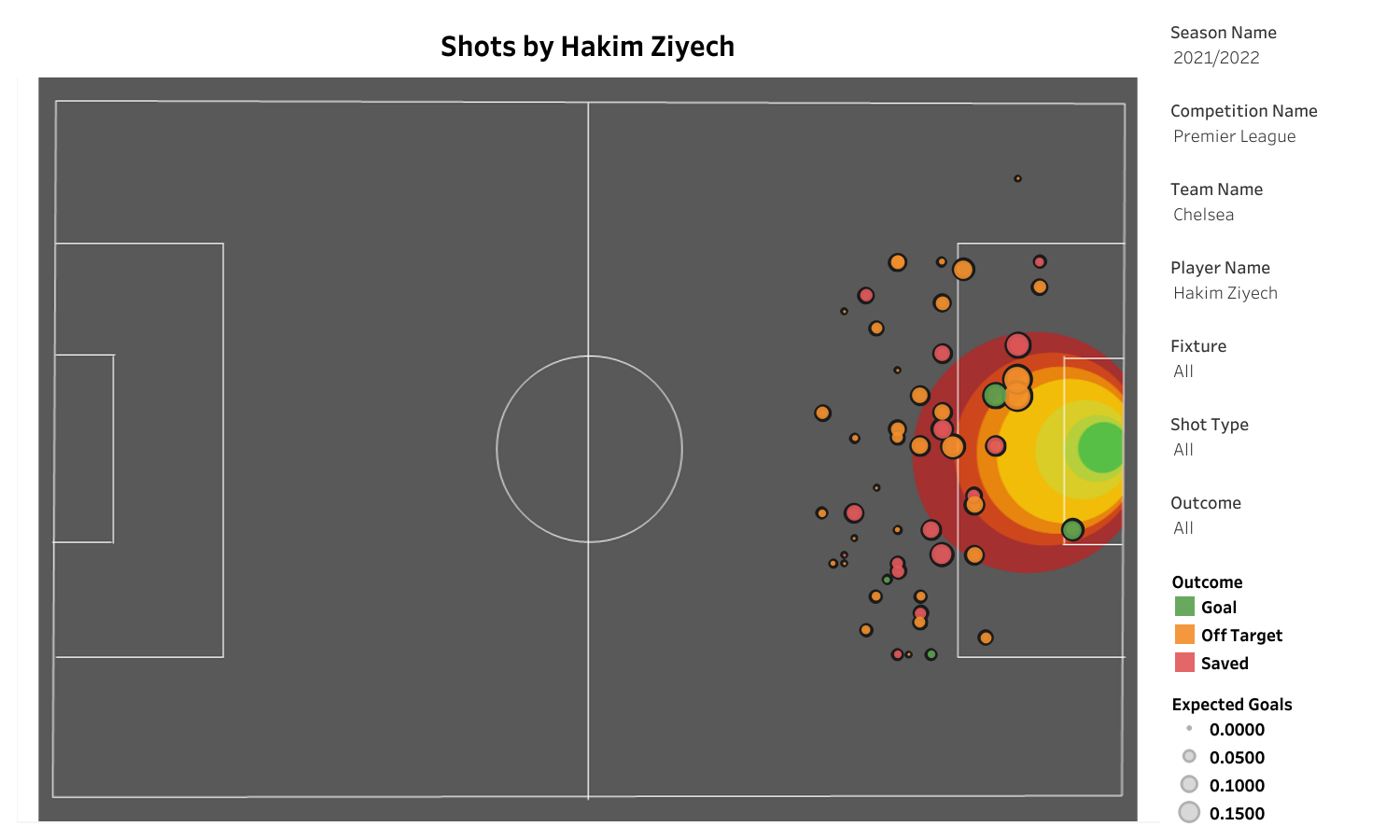 The Moroccon international attempted 54 shots with a 31.48% shot accuracy rate. He scored four goals with an xG rate of 0.23 per 90 minutes. Of these four goals, two were scored from outside the opposition’s penalty box. Ziyech likes to cut inside from the right side and attempt shots towards the far corner of the goal. 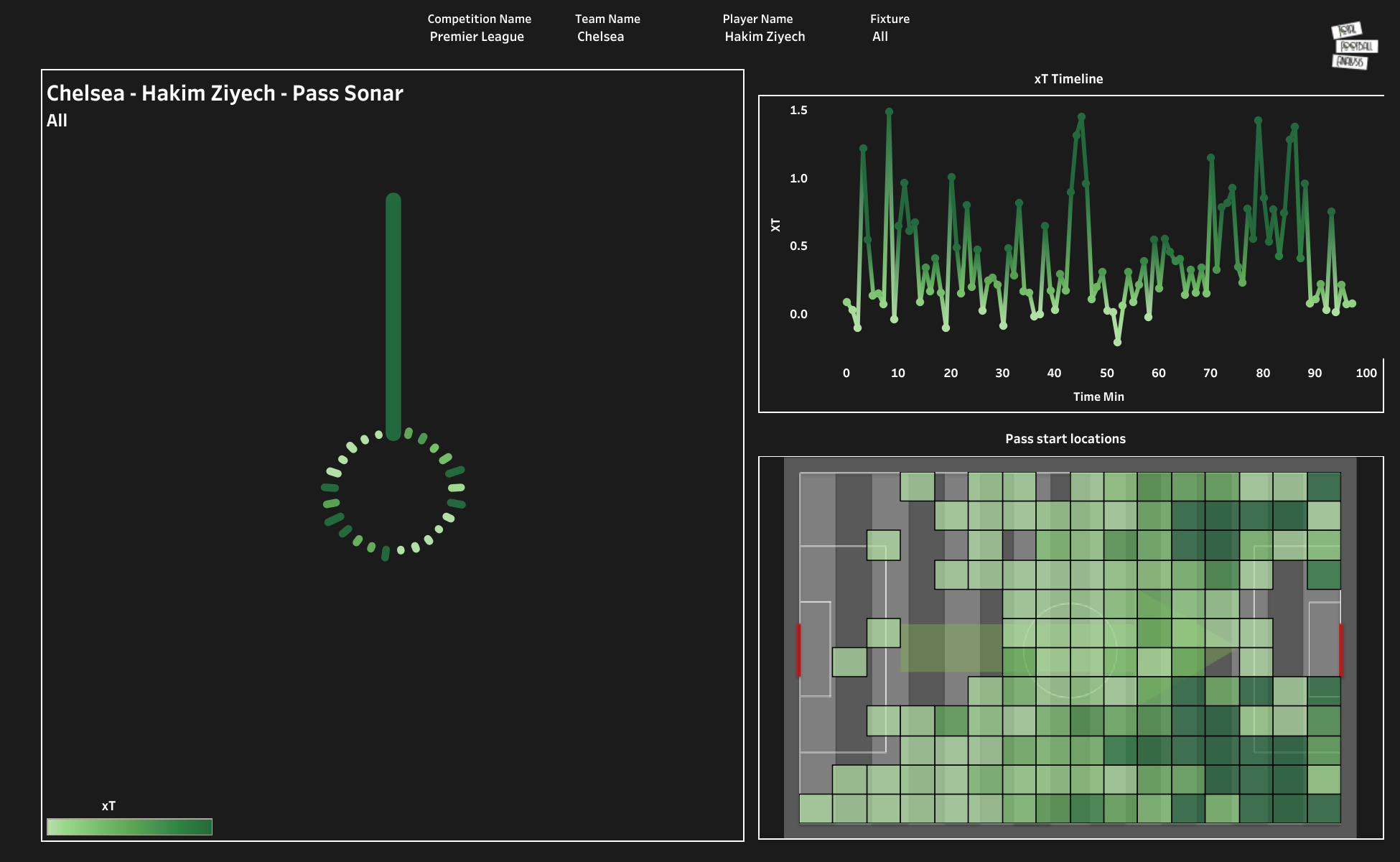 Ziyech always creates threats with his passing. He averaged 42.28 passes per 90 minutes with an accuracy rate of 80.3%. From the above viz, we can notice that Ziyech likes to get past the opposition’s defence and penetrate the opposition’s penalty box. He averages 2.82 touches inside the opposition’s penalty box per 90 minutes. The right-sided player made nine appearances off the bench. From the xT timeline, it can be observed that Ziyech is very effective with his passing during the start and towards the end of the match. He also averaged 4.63 crosses, 1.69 smart passes, and two through passes per 90 minutes, respectively.

Hakim Ziyech is one of the best creative players on the right side. Ajax should try and sign him for another spell at the club. They are also playing UEFA Champions League football next season, and this might urge him to make a move back to his old club.

Matthijs de Ligt: How good is the Ajax captain?

Under the microscope: Ajax bowing out of the Champions League –...

Under the microscope: How Brian Brobbey is settling into the number...