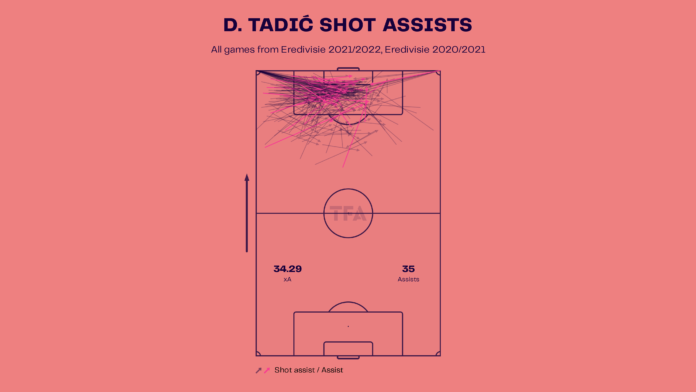 Dusan Tadic has played 211 matches for Ajax and has 94 goals and 99 assists to his name. The Serbian has been instrumental in their success over the past few years and was a key figure in the 2018-19 season when they reached the semi-finals of the UEFA Champions League, defeating some European heavyweights like Real Madrid and Juventus. He earned his place in the UEFA Champions League squad of the season and was one of the top 30 players nominated for the Ballon d’Or award in 2019.

But ever since Erik Ten Hag left Ajax for Old Trafford, taking some of their key players with him, the Dutch side has not looked the same. They still sit at the top of the Dutch Eredivisie but have failed to impose their authority in Europe. Their woeful performance in the Champions League has paved their path to the UEFA Europa League. But the experienced campaigner will look to inspire the Dutch side to win big at the competition.

We take a look at some stats to understand what Dusan Tadic needs to do to lead Ajax to Europa League glory. 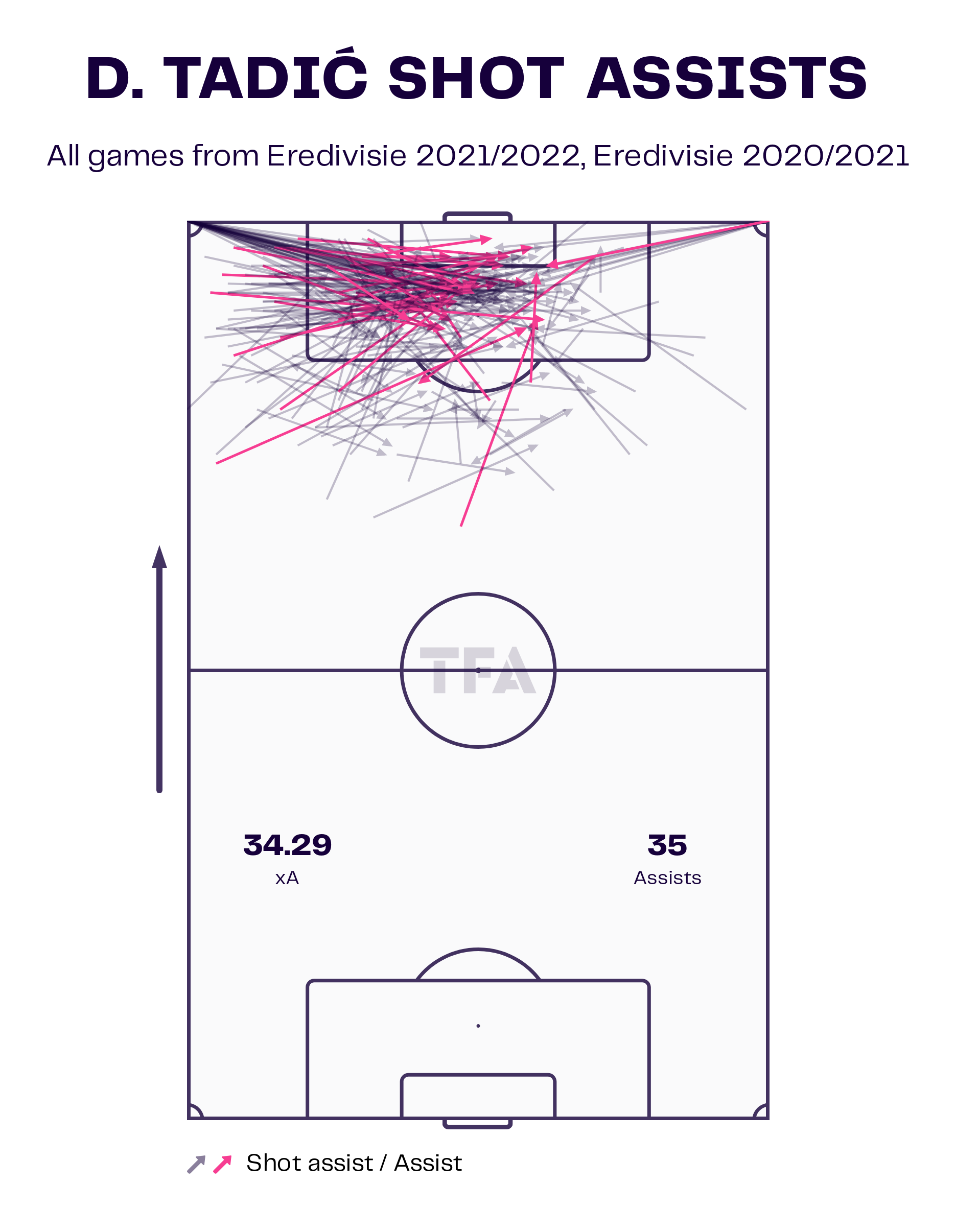 Dusan Tadic had 35 assists to his name in the last two seasons and helped his team win the Eredivisie. Ajax won every Eredivisie after Tadic joined them. He had an average of 0.45 assists per game last season and 5.03 dribbles per game with a 57.1% success rate. His runs through the flanks, cutting in with his trickery, and providing assists were crucial to their form. But in the Champions League this season, he only has one assist to his name and averages only 0.2 assists per game. His dribbles have also come down to 1.58 dribbles per game. He will have to find his dancing boots again if Ajax wants to have a successful Europa League campaign. 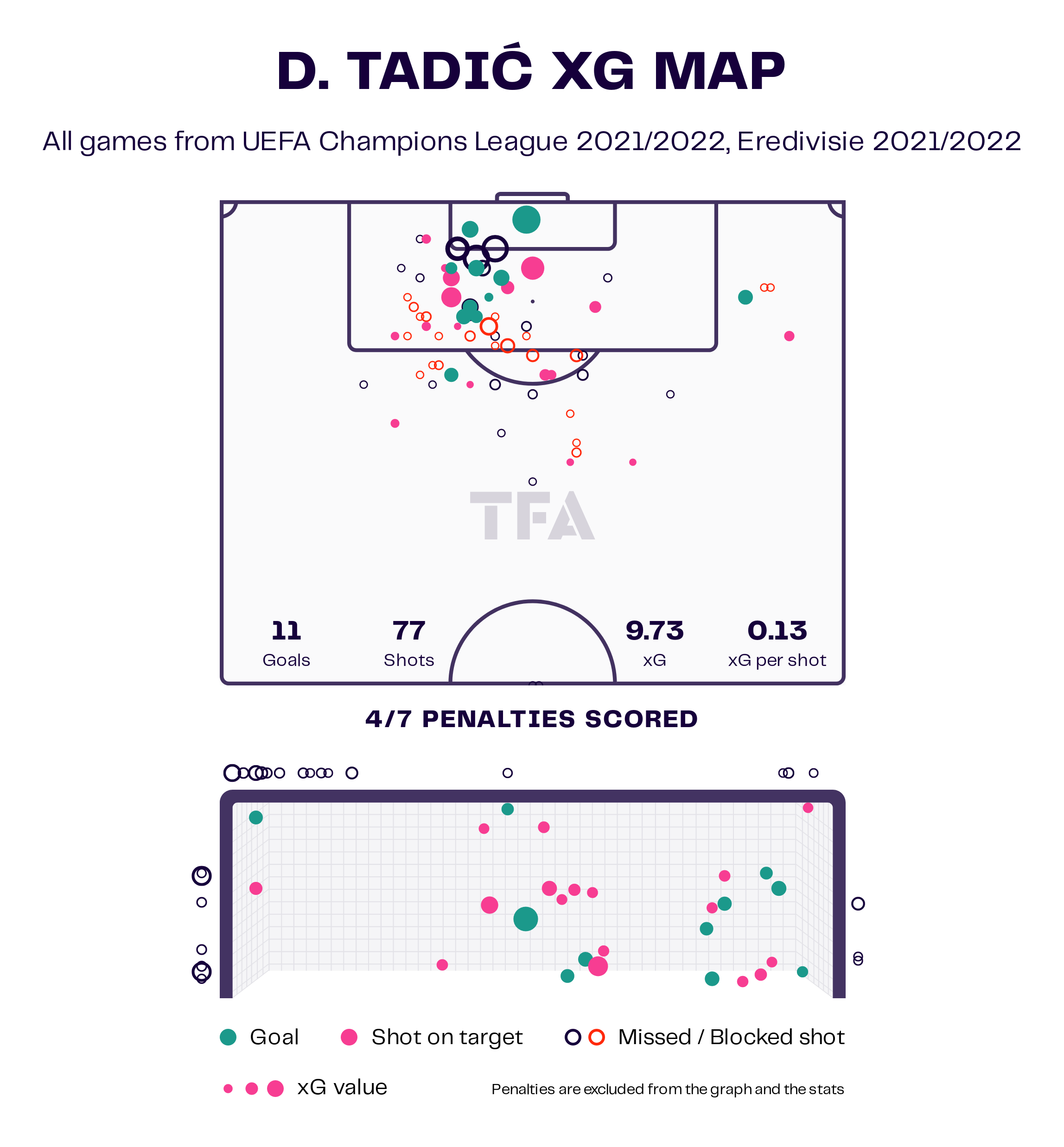 Dusan Tadic had a total of 77 shots last season and scored 11 goals. He had an xG of 9.73 last season and played a key role in their success last season. He has an average xG of 0.18 in the Eredivisie this season but hasn’t managed to find the back of the net in Europe. The Serbian takes 1.89 shots per game on average in the domestic season, but when it comes to Europe, it comes down to 0.79. His lack of contributions has hurt Ajax, and the team will be hoping that he will bring his top game with him into the Europa League. He has so far scored only two goals this season and will be trying to find the net more often.

Tadic has scored four goals and has six assists to his name in the Europa League and averages 0.29 goals and assists per game. The 33-year-old has an average of 3.79 dribbles per game in the competition and will be trying to use his experience to produce more magic.

Ajax Amsterdam played beautiful football last season under Erik Ten Hag, and Dusan Tadic was at the centre of things for the Dutch side. But this season, his contributions have been missing in clutch situations, and that, along with struggles in defence, has led them out of the Champions League and into the Europa League. Tadic will be trying to find his best-attacking form when they play in the Europa League, as there are some big names in the competition this season.