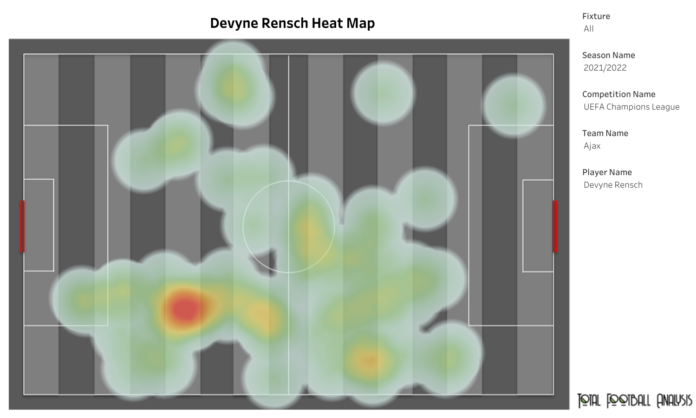 Devyne Rensch was promoted to the first team by Ajax in 2020. He played in the second half of the 2020/21 season and was a regular member of the squad for the 2021/22 season. The 19-year-old centre-back is one of the upcoming defensive talents in football. Ajax sold some of their players, and the others are on the verge of leaving. Their right-back, Noussair Mazraoui, left the club and signed for Bayern Munich, leaving Ajax short of options at the back. Jurrien Timber showed versatility and featured both as a centre-back and right-back. He is also on the wishlist of a few clubs and might leave in the coming days. This leaves the manager with only one option to play in the right-back position, and that player is Rensch. The youngster had taken the same role last season and could be used as a replacement for Mazraoui. 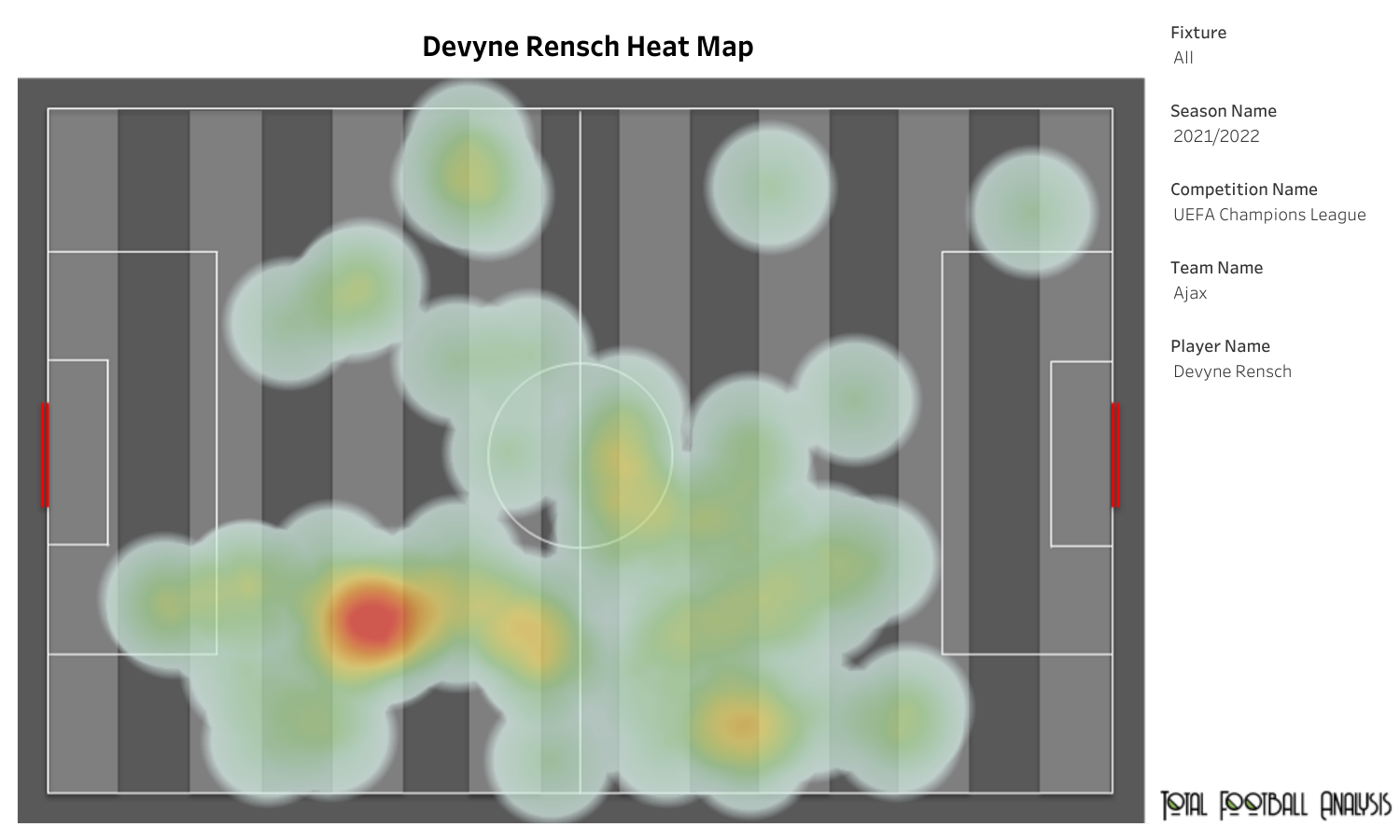 The young Dutchman made 28 appearances for Ajax last season in all competitions. He scored a goal and provided two assists. The above heat map shows his position in the five matches he featured in the UEFA Champions League. The defender spent 87 minutes on the field and played on the right for the Dutch side. He was introduced off the bench in every match. 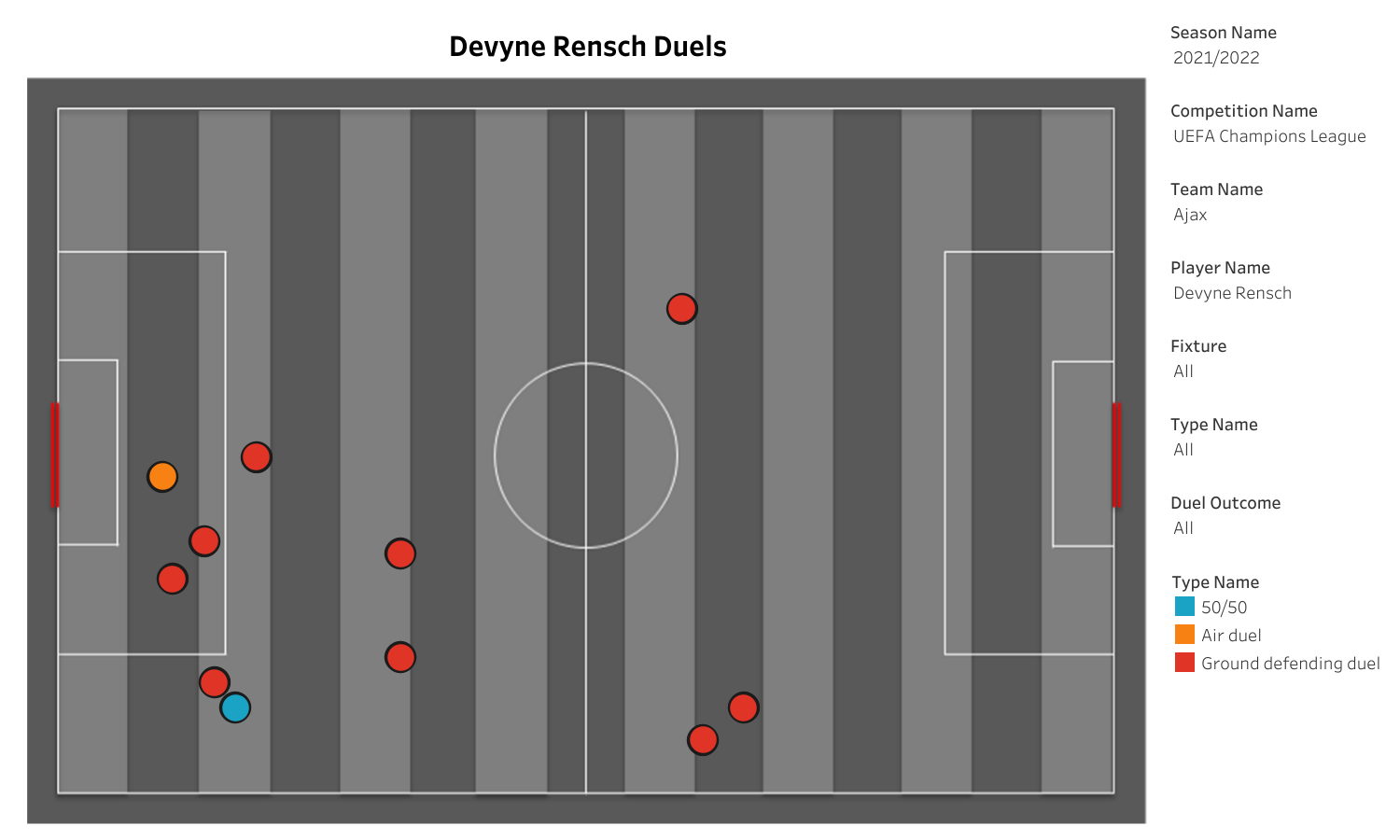 In his short time on the pitch, the defender was involved in 14.48 defensive actions per 90 minutes. He succeeded 64.3% of the time and failed on other occasions. This was mainly because he came in the last few minutes of the match to secure a victory for his side. The opposition usually comes out full guns blazing during the end periods of the match and tries to put pressure on the defender. He contested nine defensive duels, one aerial duel, and two loose ball duels each. The player only won one defensive duel and loose ball duel each. His other defensive contributions included four interceptions and eight recoveries. Of these eight recoveries, four were made inside the opposition’s half.

The centre-back was used as a right-back by Erik ten Hag in most of the matches. He got limited game-time in the Champions League but had enough opportunities in the league that will guarantee him a spot in the squad next season. He will look to show more improvement and cement his place in the right-back position.

Under the microscope: Can Sebastian Haller fire Ajax past the Round...

“He gave me a good feeling” – Ziyech says about Lampard