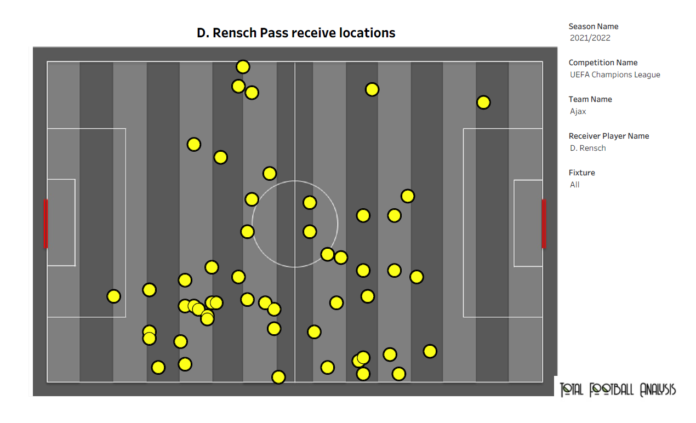 Since he was appointed the manager of Ajax, Erik ten Hag has found tremendous success in integrating many talented youth players from Ajax’s youth setup into the first team. Among Ajax’s many breakout talents in recent years to have successfully made their way to the senior team, is the 19-year-old defender Devyne Rensch.

Rensch, who received the academy player of the season award in 2019-20 season, has been slowly making his mark in ten Hag’s starting XI since making his debut for the first team in 2020. His progress and performances in the last two seasons have been noticed and several of the top European clubs are reportedly keeping tabs on him. Although he is still developing and lacks physicality, the 19-year-old defender has displayed impressive composure and ball control during his performances.

In his debut season, the right-back made 18 appearances in the Eredivisie, scoring three goals and registering two assists. Rensch also featured in the Europa League, making five appearances. His promising performances for ten Hag’s side last season have been rewarded, and he has made 11 appearances in the Eredivisie so far, scoring one goal and adding an assist. Ajax are on course to defend their Eredivisie title and are placed at the top of the league, two points above rivals PSV. They have similarly been impressive in the Champions League as well and are through to the knockouts. Although he is yet to start a match in the Champions League, Rensch has displayed promising performances as a substitute and could play an important role for his side in the knockouts.

Let’s take a look at his stats from his substitute appearances in the Champions League to understand his strengths. 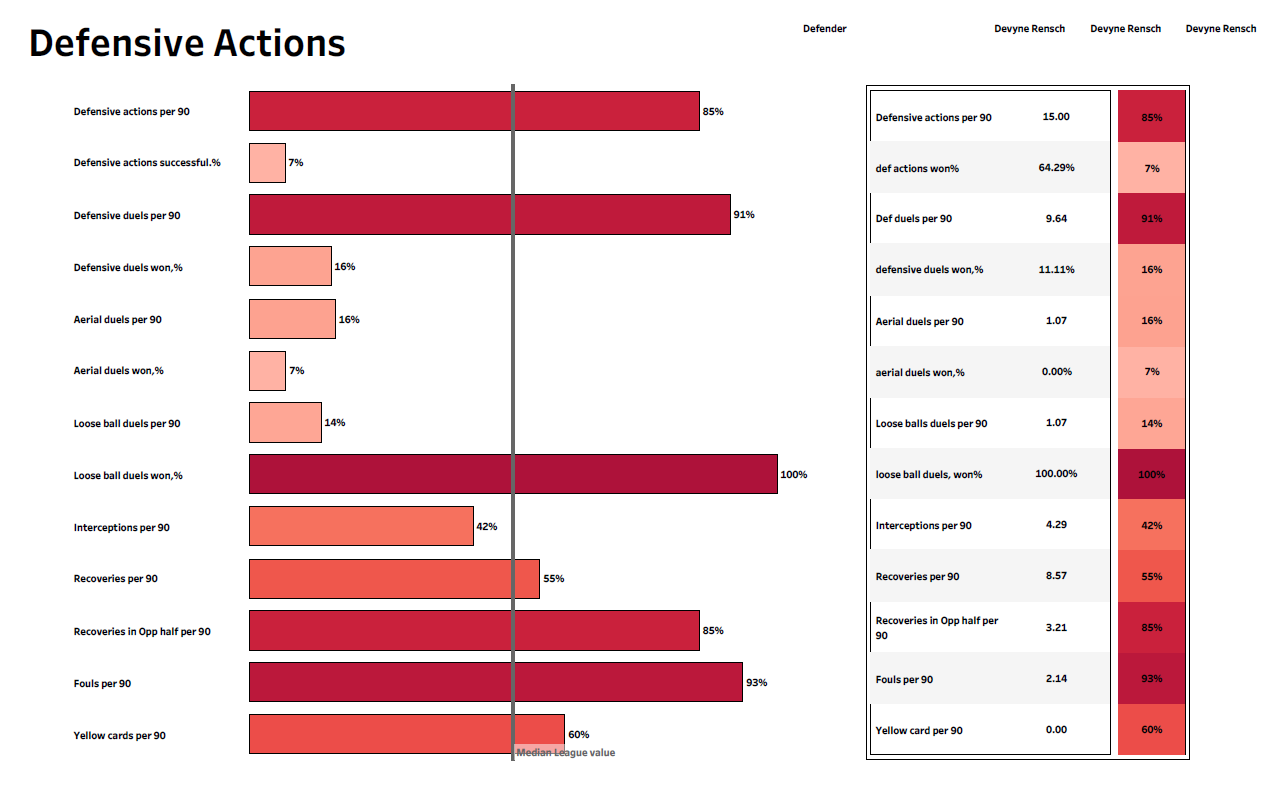 Although he has had a limited role to play in his side’s group stage fixtures, Rensch has nonetheless shown promise in his substitute appearances. He ranks highly in terms of defensive duels per 90, defensive actions per 90, loose ball duels success rate, and recoveries in the opponent’s half per 90. His stats are put more into perspective when we consider that he has made only four substitute appearances for ten Hag’s side. He has averaged more than nine defensive duels while also averaging fifteen defensive actions. Ten Hag has remarked that the youngster possesses impressive vision, athleticism, and technique. 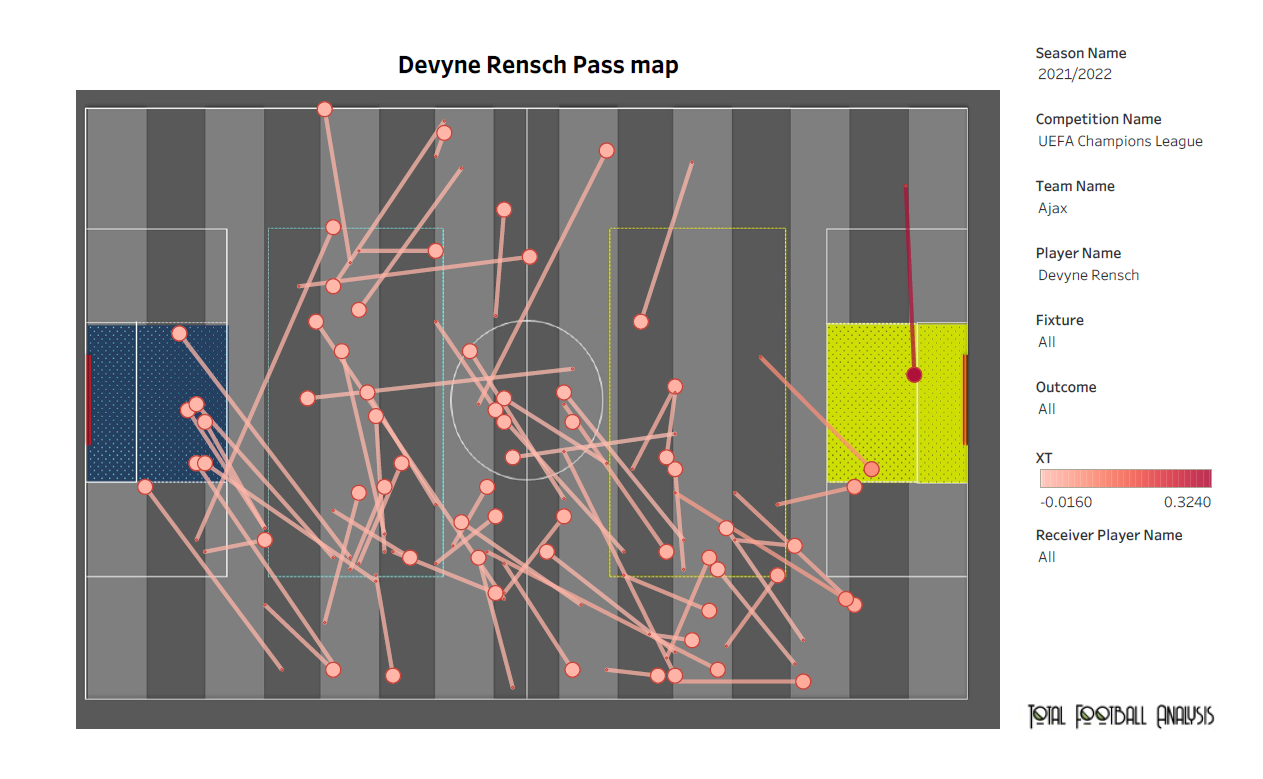 Ajax’s youth setup is known for producing players that possess excellent ability on the ball regardless of the position. Rensch has been moulded similarly and displays impressive ability on the ball. The right-back is assured in possession and maintains his composure while carrying the ball out from the back. He ranks highly in terms of passing accuracy and can deliver wide-ranging passes and crosses. In the above viz., we can see the different locations on the pitch that Rensch has delivered his passes. 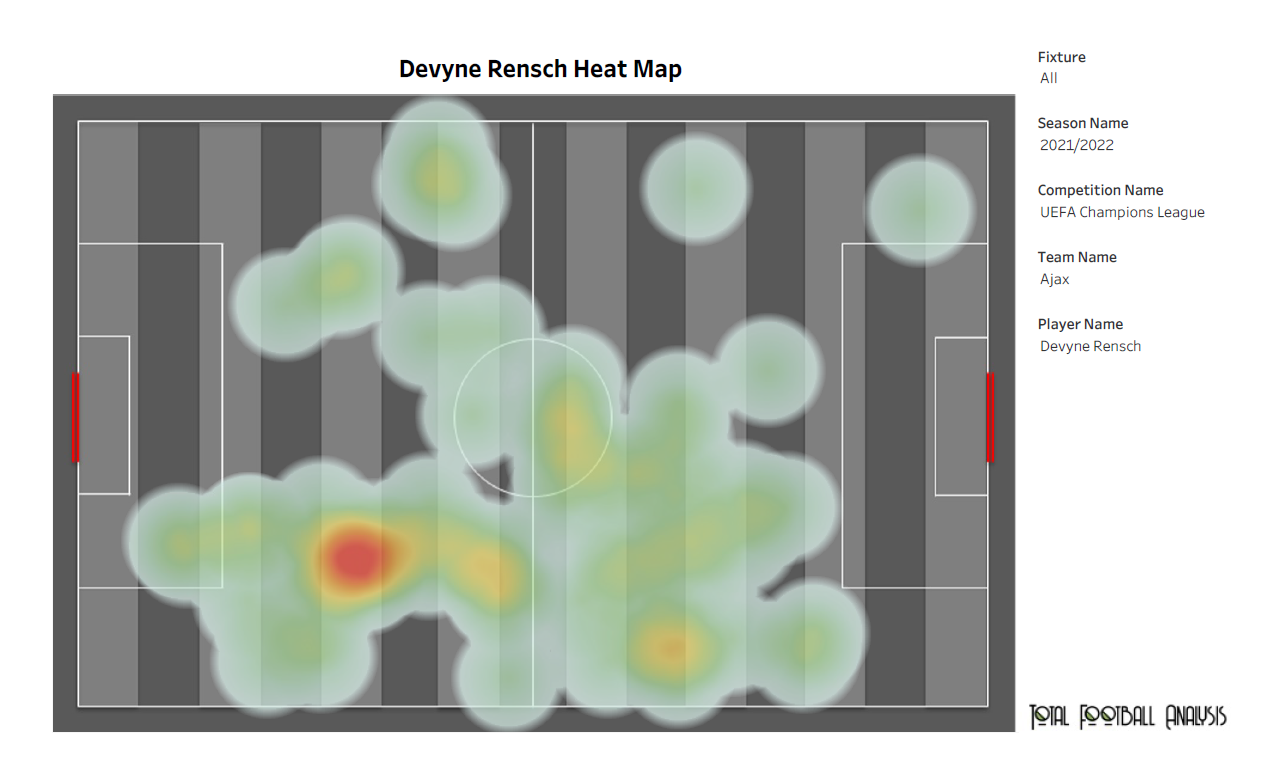 Rensch has displayed his versatility and can be deployed in multiple roles in the backline. In ten Hag’s 4-2-31/4-3-3 system, the 19-year-old has mostly been deployed as a right-back, although he is capable of playing as a centre-back as well. The youngster has shown impressive work rate playing as a right-back, which is a role that demands that players constantly track up and down the pitch. In the above viz., we can see the areas of the pitch where Rensch is active. The right-back has popped up in multiple areas of the pitch as well, which further indicates his determination to aid his team in any way possible. In the above viz., we can get a sense of the directionality of the passes delivered by Rensch. The pass start location further highlights the location and threat associated with those passes.

Throughout the two seasons, Devyne Rensch has progressed steadily and displayed signs that he could become a prominent feature of Ajax’s backline. The youngster displays impressive ability and composure on the ball that have made him a promising prospect. His performances and stats indicate that the 19-year-old right-back is on course to become Ajax’s next breakout star.

Kudus returns to the scoresheet as Ajax thrash Excelsior 7-1 in...