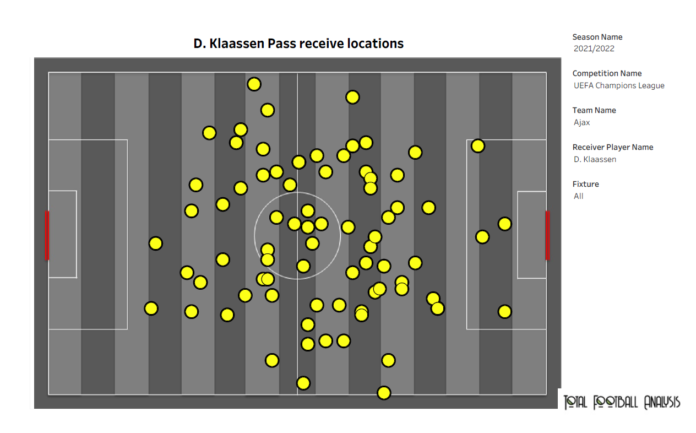 Davy Klaassen joined Ajax academy at the age of 11. He rose through the ranks of the academy and represented the Netherlands at the youth level. The attacking midfielder was handed his debut in 2011 in the Champions League, he then went on to make several appearances for the Dutch giants and became a prominent starting XI player. His performances were rewarded, and he was made Ajax’ captain in 2015.

Following his spell at Ajax, Klaassen joined Everton in 2017. The attacking midfielder’s move to Goodison Park did not go as he hoped as he struggled to make an impact, starting just 16 games for the Premier League side. Klaassen then went on to join Bundesliga side Werder Bremen in the summer of 2018 after he was told by then Everton manager Marcos Silva that he did not consider the attacking midfielder in his plans.

The Dutchman became a regular starter for Werder Bremen and made 69 appearances for the German side across all competitions. He was able to produce quality performances that made him an important player for Ajax. After two seasons with Werder Bremen, Klaassen returned to Ajax in 2020, signing a contract until 2024 at the Johan Cruijff Arena. Since returning to Ajax, the attacking midfielder has become an important player for ten Hag’s side. He made 29 appearances in the Eredivisie in the 2020-21 season, scoring 12 goals and adding a further three assists. In addition, he made six appearances in the Champions League as well. This season as well, he has been counted upon by ten Hag and has made 15 appearances in the Eredivisie, scoring three goals.

In a recent interview, Klaassen spoke of his time at Goodison Park and admitted that it was a combination of factors that made it a difficult time for him. The Dutchman also admitted that he is much suited to the game at Ajax. 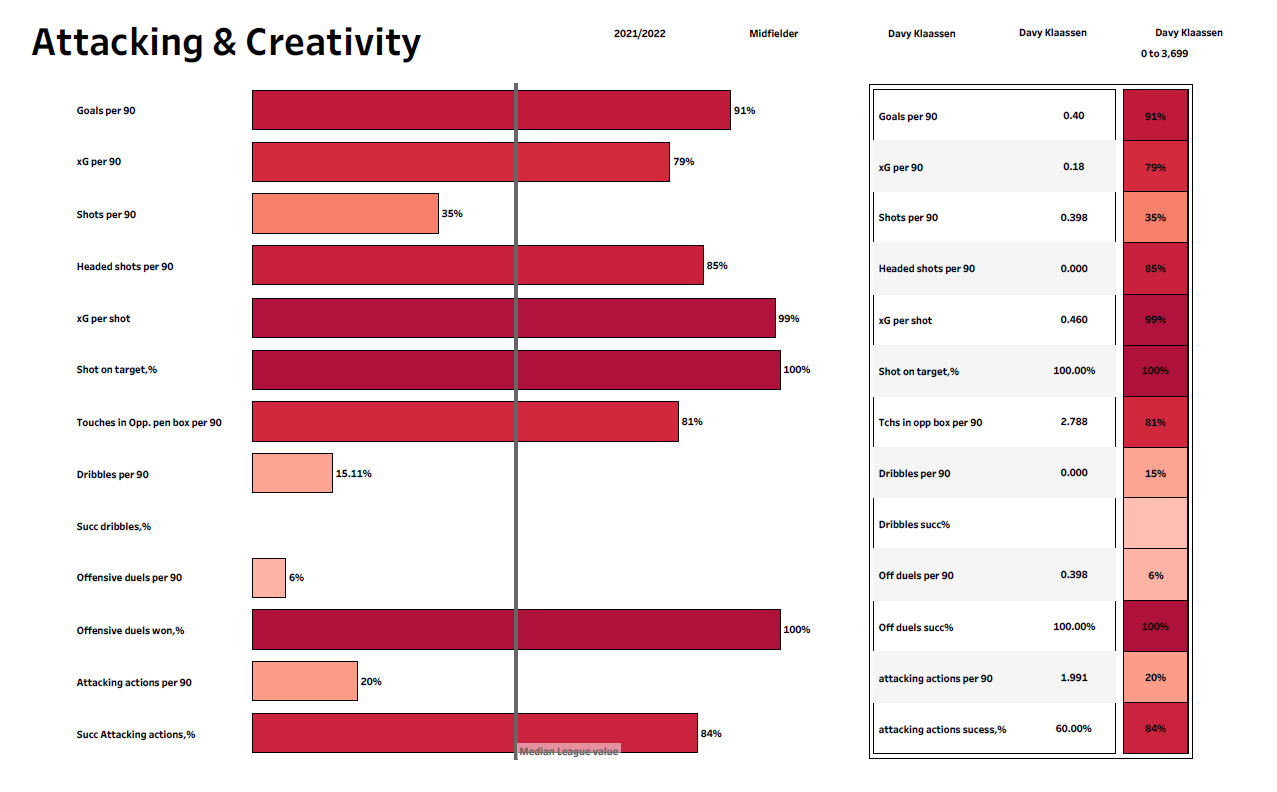 So far, Klaassen has made five appearances in the Champions League, scoring one goal. While most of his appearances came as a substitute, the majority of Dutchman’s attacking and creativity stats have been above the league’s median value. His most notable stats have been xG per shot, shot accuracy, and offensive duels won. Klaassen possesses an impressive finishing ability and is a precise shooter. His strong ability on the ball, along with his intelligent ball distribution, make him a threat during the attacking phases. 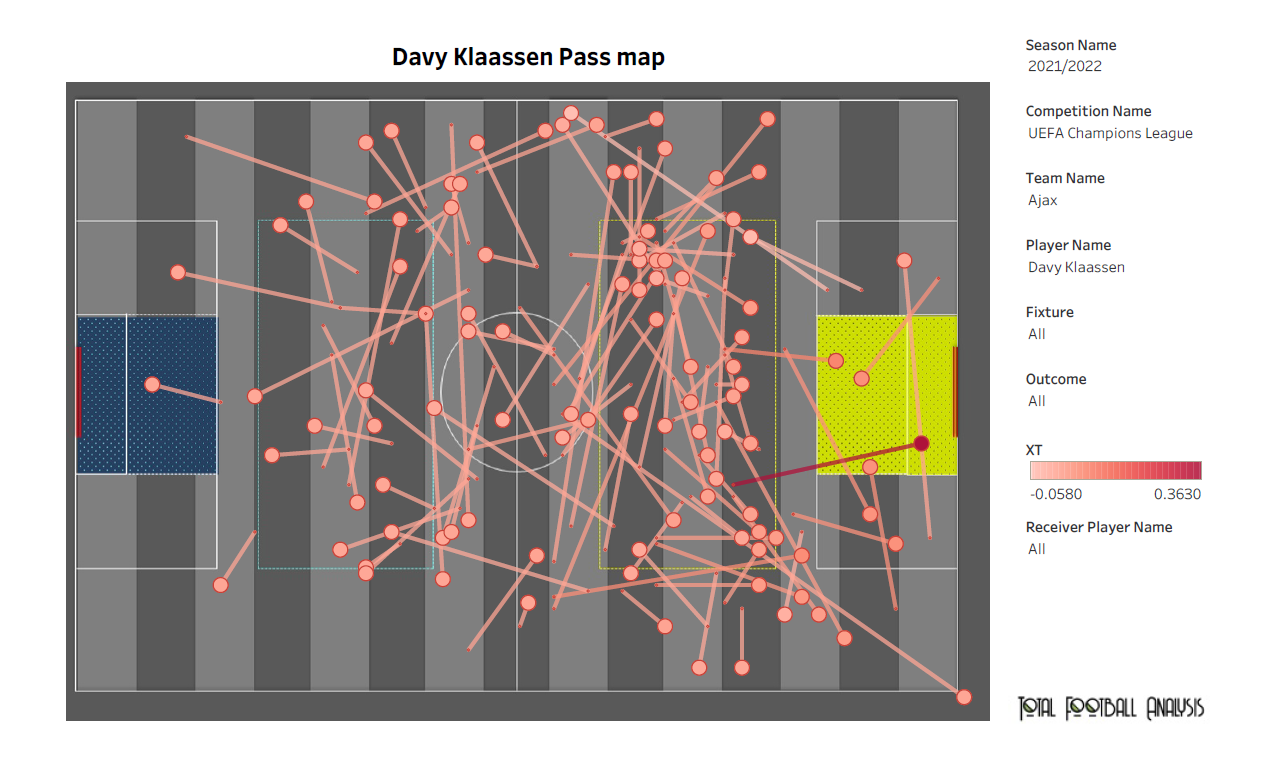 His pass map displays the wide array of passes that he has made during his appearances. We can see from the above map that he has distributed the ball all over the field. Klaassen excels in reading the game and can consistently find pockets of spaces to aid his side in the attack. His combination with his forward teammates near the opposition’s penalty area makes him a threatening asset.

Klaassen is best suited in an advanced role as a number 10. In ten Hag’s 4-2-3-1 system in recent games, he has been deployed alongside Gravenberch in a deeper role, but he often moves higher up the pitch to support his team in the attack. His heat map highlights the areas on the pitch where he is most active. The red zones indicate that he has frequently drifted higher up the pitch in half-spaces on the left wing. 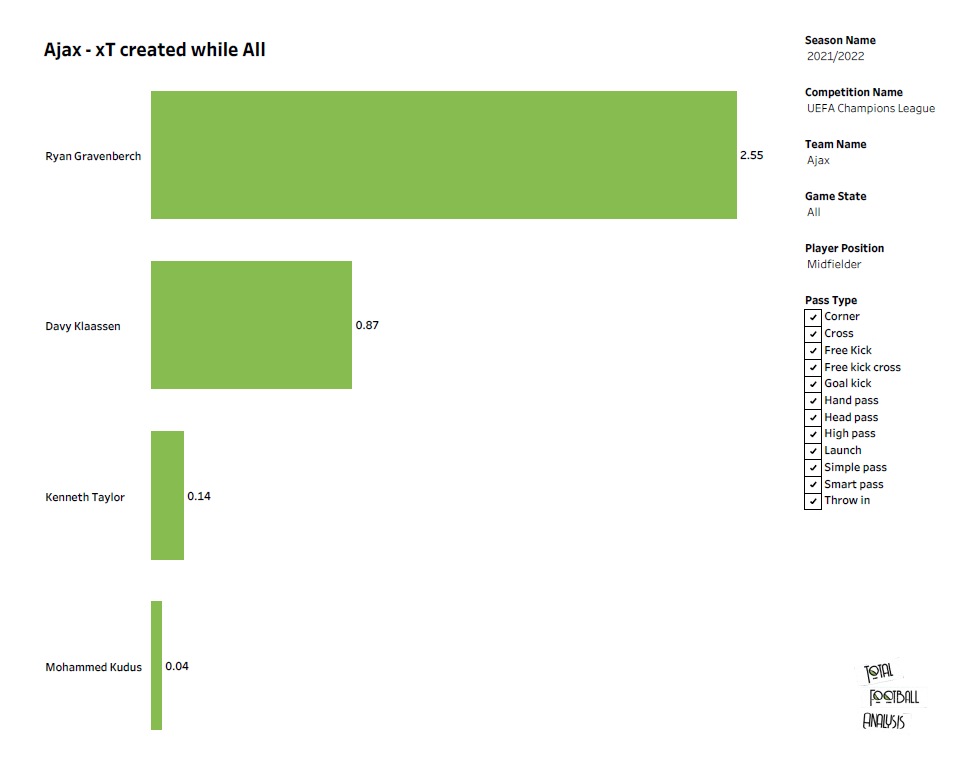 While his goal-scoring has declined in the recent seasons, Klaassen nevertheless remains a threat near the opposition’s area and can cause problems for the opponents with his ball distribution, shooting, and link-up play. His stats indicate that he can produce the goods for Ajax in the knockouts.

“He gave me a good feeling” – Ziyech says about Lampard

Under the microscope: Reasons why Ajax should hold-on to the young...