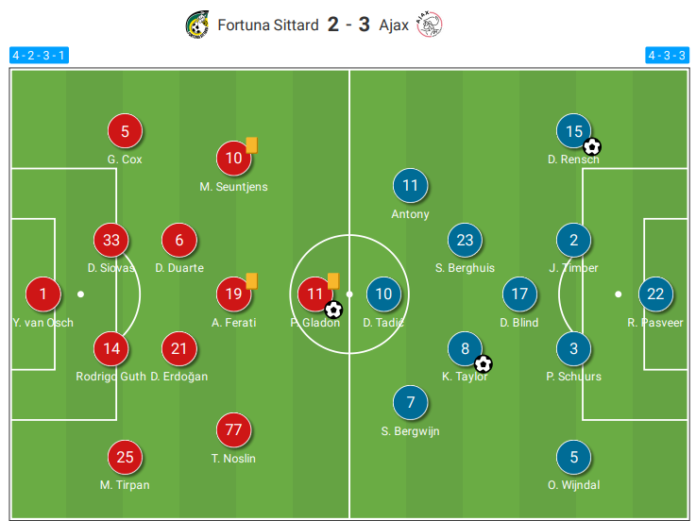 The Dutch champions, Ajax, saw a lot of faces leave the club in the summer. Manager Erik ten Hag signed a deal with Manchester United and parted ways with the club. Several players received offers from top European clubs, and they couldn’t resist them. Ajax lost 5–6 players in the transfer window, and that has given the head coach, Alfred Schreuder, a headache. He still has some youngsters and experienced players in the team who could help Ajax defend the league title and reach the knockout stages of the UEFA Champions League. Let us look at the possible lineup in which the Dutch team could feature in the new season.

Right-back Noussair Mazraoui and midfielder Ryan Gravenberch were the first ones to leave when they joined the German giants, Bayern Munich. They were soon followed by goalkeeper Andre Onana, who joined Inter Milan. Their main centre-back, Lisandro Martínez, was recently signed by Manchester United, whereas left-back Nicolás Tagliafico joined Lyon. The last major exit was their top goalscorer from last season, Sebastien Haller. The Frenchman joined Borussia Dortmund as Erling Haaland’s replacement. 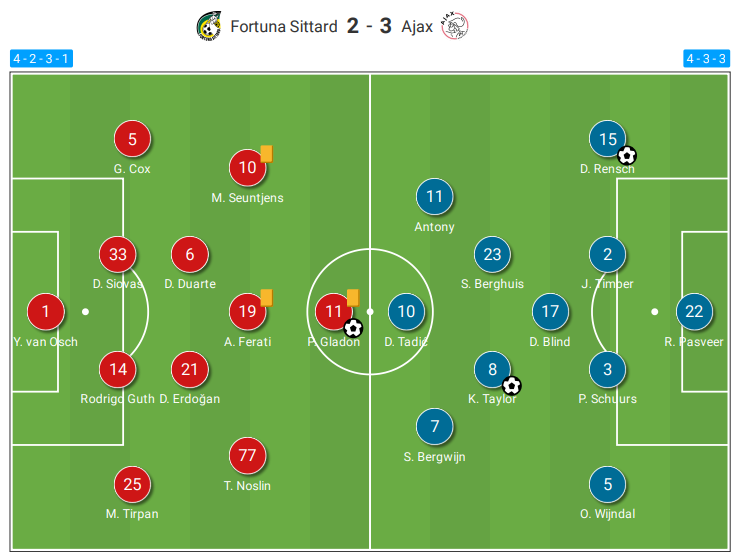 Ajax have added a few players to replace these departed players. Steven Bergwijn was signed from Spurs to improve the attack, along with former Porto winger, Francisco Conceição. Owen Winjdal came in to take the vacant left-back role, and Calvin Bassey was signed from the Rangers to replace Martínez. Their last big signing of the season was Brian Brobbey. He returned for his second spell at the Dutch club. Some of these players featured in Ajax’s first match in the Eredivisie 2022/23 season. The above viz shows that Ajax started their first match in a 4-3-3 formation. Bergwijn and Winjdal made their league debuts.

Ajax are likely to stick with the same formation this season. Dušan Tadić is tipped to lead the attack. He is the most experienced player in the attack for the team. Brobbey will be his deputy in that role. Bergwijn will be the main creative force from the left, and their most wanted player, Antony, will continue to play on the right wing. Ajax did well to keep hold of him as his creativity will play a crucial role in the team next season. New signing Conceição is the second choice on the right side, and Mohamed Daramy is the other option available on the left side. 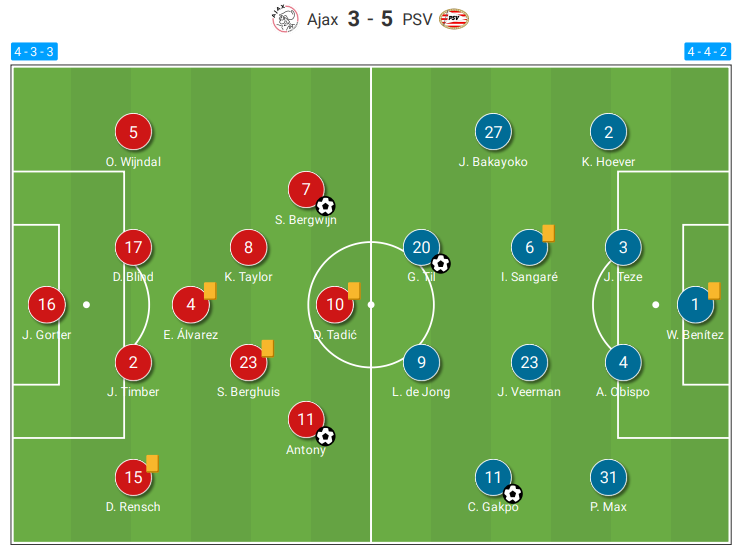 Ajax played the Dutch Super Cup in the same formation, as shown in the above viz. The midfield will feature three players, with Kenneth Taylor and Steven Berghuis guaranteed a regular place in the starting XI. They will play a more advanced role than the third midfielder. The third midfielder will be a defensive midfielder, and the likely candidates for that position are Edson Álvarez and the veteran, Daley Blind.

In defence, Ajax will play with a back four. Winjdal will feature as the left-back, with Devyne Rensch likely to feature on the opposite side. Jurrien Timber and Perr Schuurs were the two centre-backs in recent games, and the manager might opt to go with the same pairing. It won’t be long before Bassey impresses the manager and challenges these two players for a regular position in the centre-back role. Remko Pasveer will be the last line of the defence.

The above viz shows Ajax’s change in formation in their last match. They began the match in a 4-3-3 formation; he then shifted to two holding midfielders and three attacking players, who supported the striker. Eventually, they ended up with a 4-1-4-1 formation, with two wide players playing a defensive role. These are the few changes in tactics that could be expected in the coming season.

Ajax have their task cut out in their title defence season. They have a lot of young talent in the squad, and these players could become their future regular players. As of now, they will likely go with the above-mentioned players to win titles this season.

David Neres vs Quincy Promes: Who should start on the left...

It would take a lot more for Ajax to keep hold...