It has been a forgetful season for Ajax in the UEFA Champions League this season. They have looked nothing more than a slim shadow of their own past, as teams have eased past them in the Champions League. They are no longer the same team that Erik Ten Hag coached in the previous seasons. With him gone and a group of important players gone as well, their attack looks rather toothless and their defence clueless.

We take a look at some stats to understand what happened to Ajax Amsterdam, as they are struggling to compete with top teams in Europe and are out of the Champions League.

Ajax have not been as ruthless as their opponents, and it is to be seen in the stats as well. They have an average of 8.75 shots on target per game in the Champions League this season. It has come down from a brilliant 15.88 in the last season.

They also had an average of 22.38 crosses per game last year, which has come down to 10.25. Both show how important the roles played by wide players like Antony and strikers like Haller were. Sebastian Haller was Ajax’s top scorer with 11 goals in the competition. Meanwhile, this season, the whole team has managed only a total of eight goals.

This is Ajax’s positional attack from the match against Liverpool, in which they lost 2-1. They had 10 positional attacks but none of them led to any shots and they ended up having the worst xG of the season, 0.38. They only had two shots in that match, out of which only one was on target. They had a poor accuracy of 33.33 when crossing the ball as well. 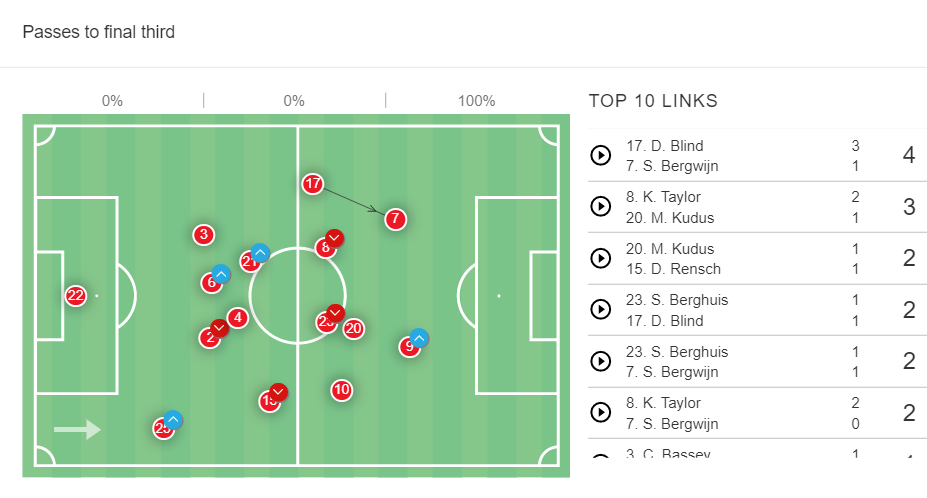 The above data shows how Bergwijn and Kudus failed to combine in the final third in the match against Napoli, in which they lost 6-1. 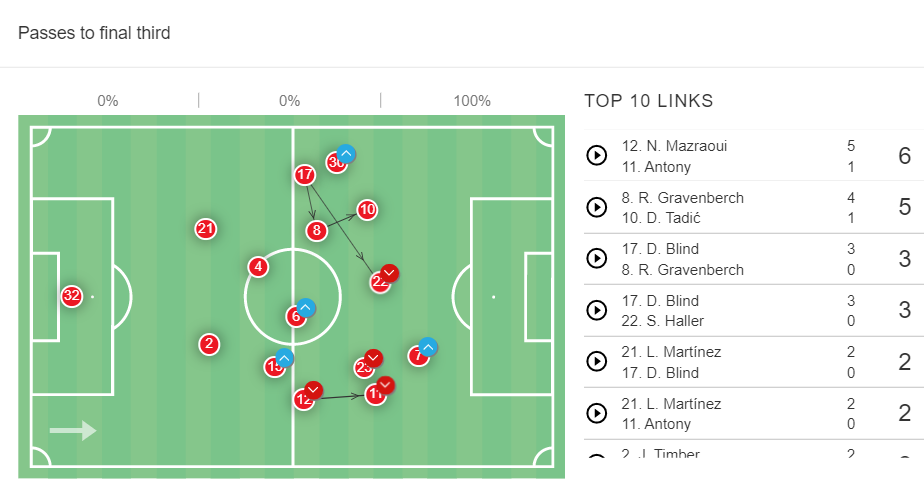 This visual shows how Ajax combined in the final third last year in the match against Borussia Dortmund to make quick interchanges of passes and, therefore, were able to create danger for the opposition. Ajax went on to win the match 4-0.

This is one of the worst seasons for Ajax defensively in the Champions League. The Dutch side have conceded a total of 12 goals this season, with an average of three goals per game.

This season saw Ajax suffer one of their heaviest defeats in the competition when they lost 6-1 to Napoli. Napoli had 25 shots, of which 13 were on target, while the Dutch side had only 7. Ajax have only won 61.6% of their defensive duels this season on average.

Ajax have found it difficult to get their creative juices flowing against top teams in Europe this season. Defensive mistakes have not made it any easier for them either. Ajax’s management and coach will have to do some serious introspection and come up with plans to bring their Eredivisie form into the Champions League.

How did Heracles stun Ajax?

‘Does a lot of good’- Ajax are nurturing another young international...