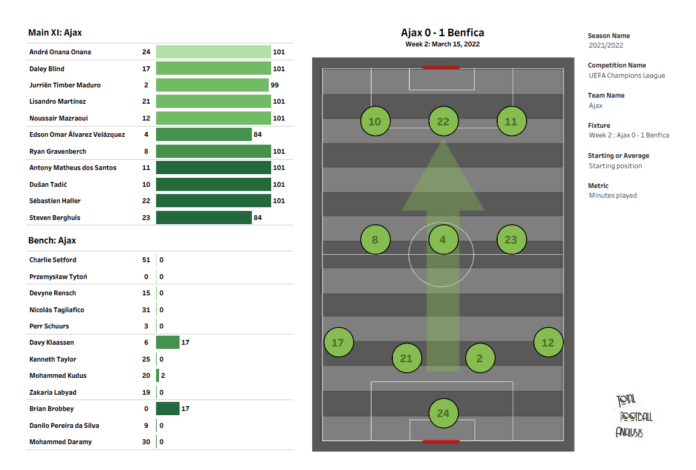 Champions League’s dark horse, Ajax, crashed out of the tournament despite a dominant performance against Benfica. Darwin Nunez’s goal ensured that a tenacious Benfica side progressed to the quarter-finals. The Dutch giants were dominant for the entirety of the match, but Benfica held on and capitalized via a set-piece.

After a chaotic start to the match, where both teams pressed relentlessly, Sebastien Haller almost gave Ajax the advantage when he found the net, but the goal was ruled out as Dusan Tadic was offside during the buildup. Daley Blind’s threaded pass found Tadic near the edge of the box, who squared the ball to Haller. The Ivorian international tapped home from close range, however, Tadic was found in an offside position before the pass was made, and the goal was overturned.

Ajax had few more opportunities before the break to take the advantage, as Tadic’s crosses from the left wing were causing a lot of trouble for Benfica. One of Tadic’s crosses into the box found Steven Berghuis via a deflection. The former PSV man created the space to shoot, but his left-footed effort was off target. Ryan Gravenberch’s long-range strike was tipped over the goal by Benfica goalkeeper Vlachodimos. Ajax kept bombarding Benfica’s penalty area with crosses for the rest of the first half, but both teams remained at level-pegging at the break.

The second half started in the same tune as the first, as Ajax continued spraying threatening crosses near the opposition box. However, Benfica were robust in their defense and were able to progress the ball more in the opponent’s half. Despite creating plenty of chances, Ajax were not able to find the back of the net, and they were made to pay when Alex Grimaldo’s free-kick from the right wing was headed home by Darwin Nunez. Erik ten Hag brought in two attacking changes, but Ajax failed to grab the equalizer, with Benfica snatching the victory at the Johan Cruyff Arena.

Let’s take a look at some stats to gauge what went wrong for Ajax. 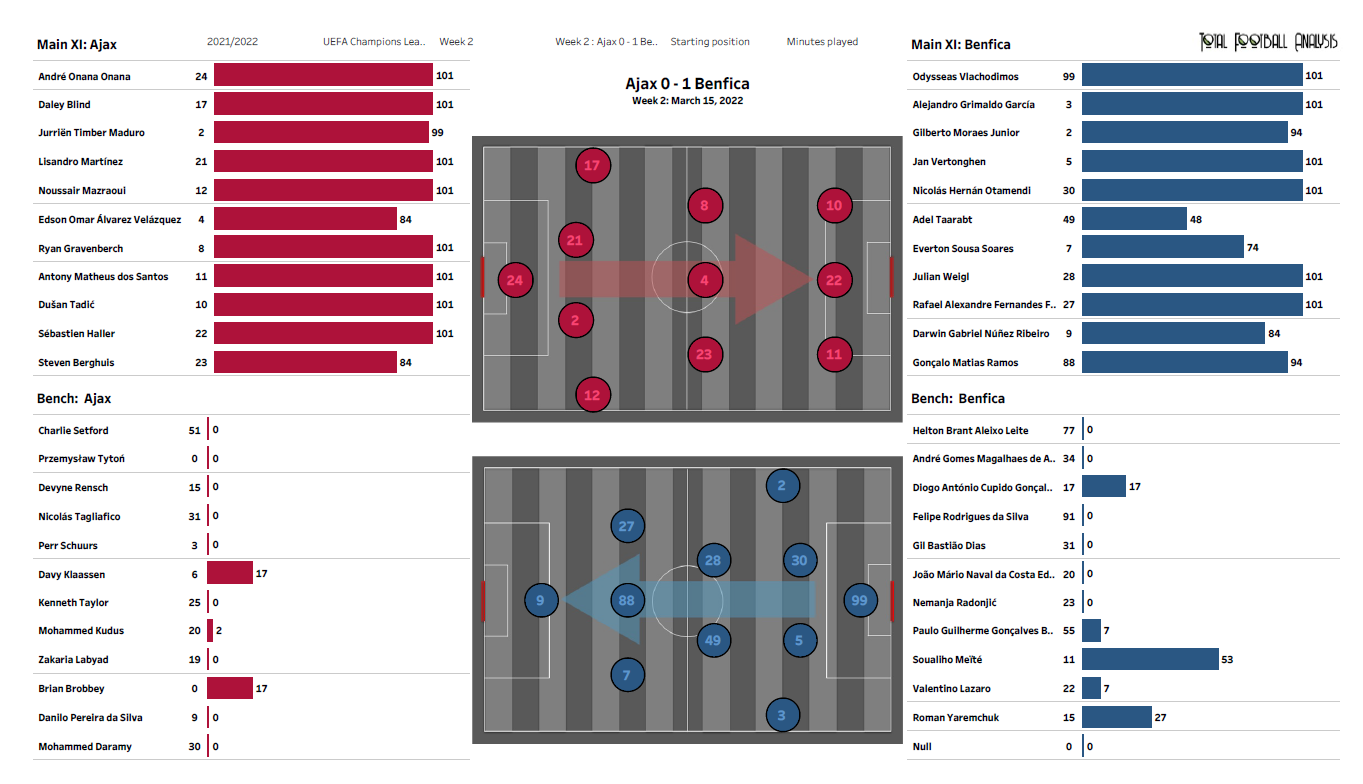 In the above viz, we can see the comparison of Ajax and Benfica’s starting lineups. Ajax lined up in a 4-3-3 formation. Sebastien Haller led the attack with Tadic and Antony on either flank. The three-man midfield included Gravenberch, Alvarez, and Berghuis. Daley Blind and Noussair Mazraoui occupied the full-back spot while Lisandro Martinez and Jurrien Timber were the two centre-backs. 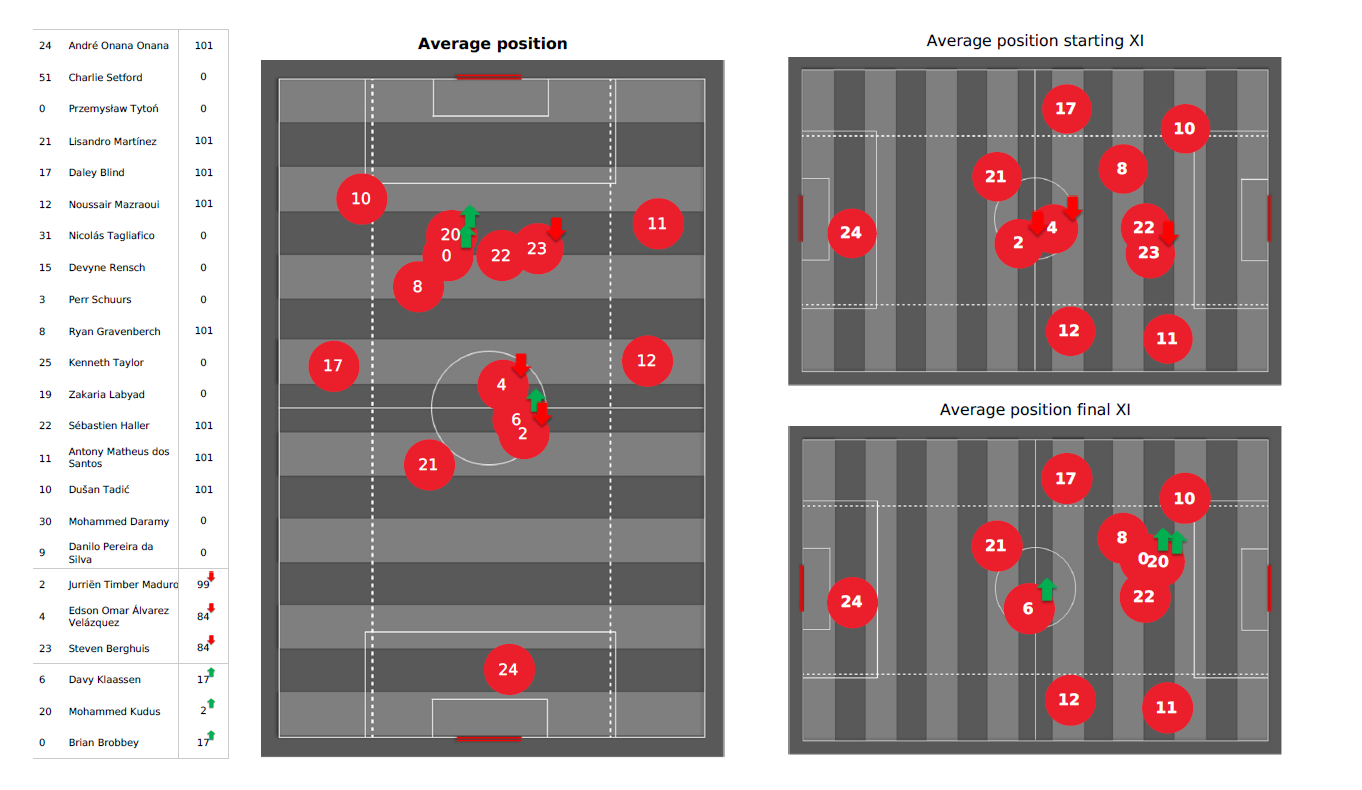 The above viz displays the average positions occupied by Ajax. The Dutch giants played with a high line with most of their players occupying spaces in the opponent’s half. Both the full-backs advanced to the opponent’s half to create overloads. Both wingers, Tadic and Antony, occupied advanced positions in the opponent’s half, looking to either cross the ball into threatening areas or stretch out the defense to create space in front of the goal. Tadic and Antony were influential, but none of their created chances find the back of the net. Sebastien Haller was closely marked by the Benfica defenders and was unable to find any clear-cut goal-scoring opportunities. 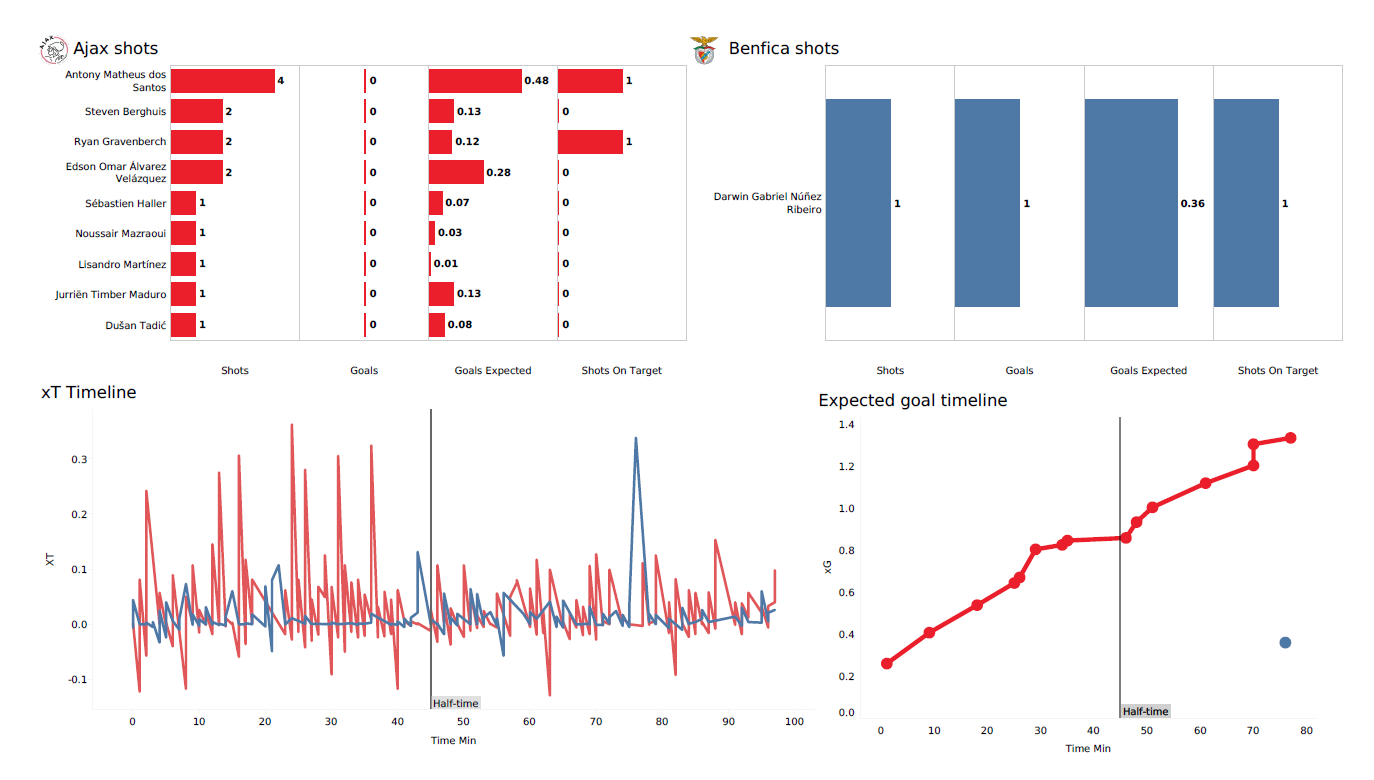 We can see just how dominant Ajax were in both halves in terms of the expected threat. Antony took the most number of shots (four), while Berghuis, Gravenberch, and Alvarez took two shots each. Not only did Ajax create more goal-scoring chances, but they also created high-quality chances, as indicated by the expected goals timeline. Benfica converted their only effort on target.

Despite creating plenty of goal-scoring opportunities in both halves, Ajax failed to capitalize. Benfica held on and defended resolutely during the match and stunned the Dutch giants, converting their only clear-cut opportunity.