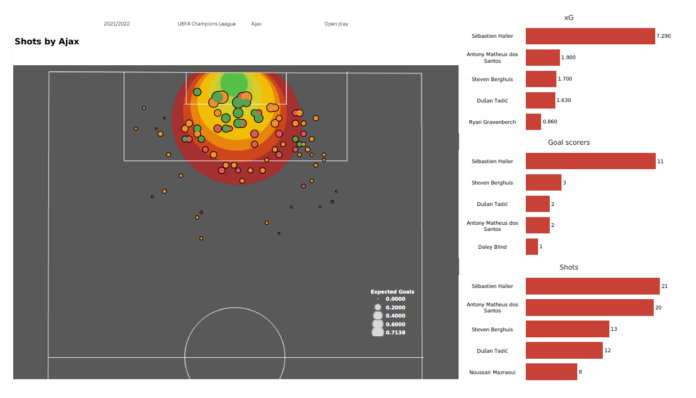 Heading into the return leg of the Champions League Round-of-16, Ajax have maintained their impressive run in the Eredivisie. The Dutch giants are undefeated in their previous three matches in the league and currently sit at the top of the table, two points above rivals PSV. Erik ten Hag’s men would be looking to utilize their home advantage when they welcome Benfica this week.

Since the start of the season, Ajax have looked like a strong unit of players who are tenacious in defense and fluid in attack. They are a balanced group, consisting of experienced veterans of the game and exciting young talent about to make their mark. Following a strong showing in the current campaign, Ajax’s young talents have been gaining a lot of attention from scouts all over Europe. Among those players is the duo powering Ajax’s right wing – Noussair Mazraoui and Antony.

The Moroccan right-back has emerged as a target for many of the top clubs in Europe after his excellent performances this season. In addition, the 24-year-old will become a free agent in the summer, which makes him an even more appealing prospect. So far, Mazraoui has made 21 appearances in the Eredivisie, scoring five goals and laying two assists. He has also been a prominent feature for his side in the Champions League with seven appearances.

Further on the right, there is the Brazilian creative wizard, Antony. The winger has been making waves for the past 18 months and is an influential part of Ajax’s attack. The Brazilian has scored seven goals and provided four assists in 21 appearances in the league while also scoring twice and registering four assists in six appearances in the Champions League. His strong performances on the right wing have made him a target for a host of Premier League clubs.

Both Antony and Mazraoui have been a pivotal part of ten Hag’s tactics this season. The duo has been involved in creating or scoring many important goals this season and could play an important role in their side’s bid to reach the quarter-finals of the Champions League.

Let’s take a look at some stats to gauge the duo fuelling Ajax’s right wing. 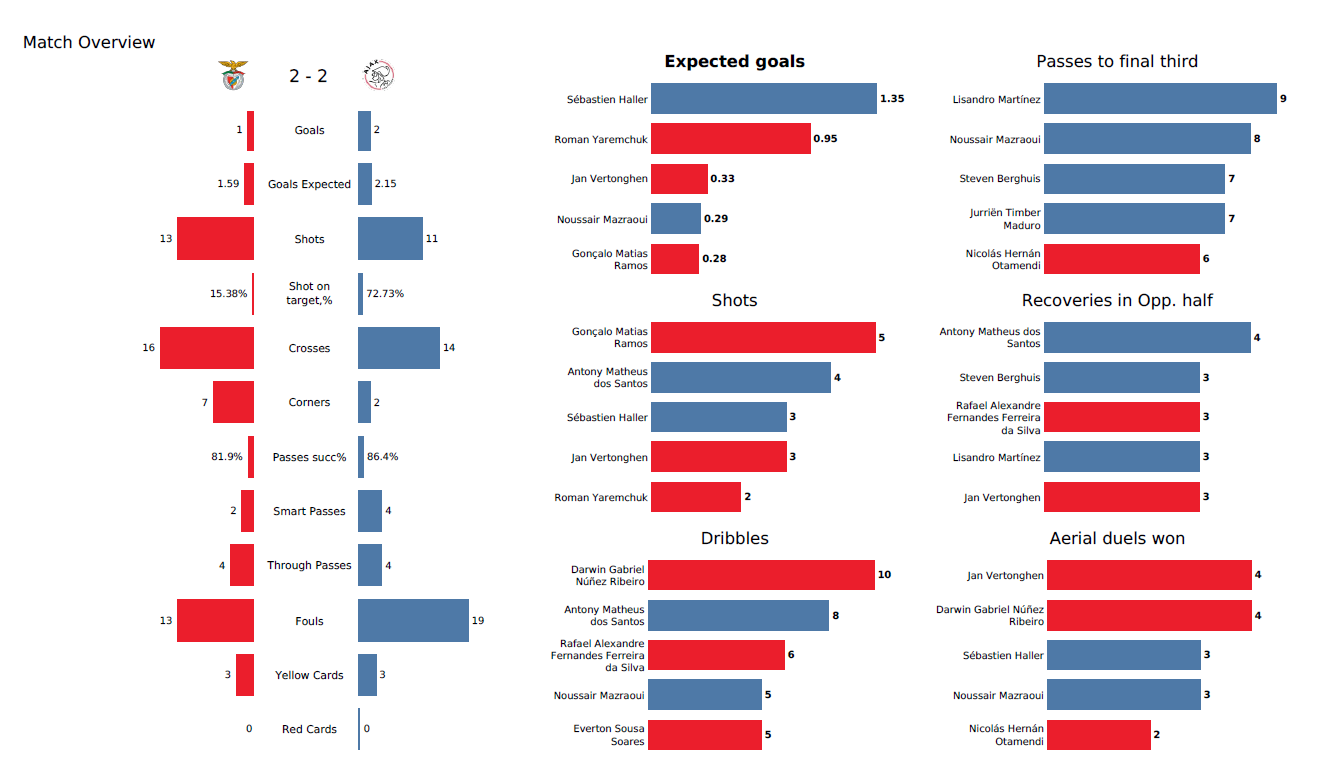 In the above viz, we can see that both Mazraoui and Antony were heavily involved in the match against Benfica in the first leg. The duo caused a lot of problems for Benfica throughout the game and was directly involved in Ajax’s first goal. Mazraoui recovered the ball near the feet of Grimaldo before laying it off to his right-winger. Antony then passed the ball to his right where Mazraoui made his overlapping run. The Moroccan’s cross found Tadic, who was unmarked at the far post, slotting the ball home. Antony was threatening throughout the match while Mazraoui nearly got on the scoresheet. 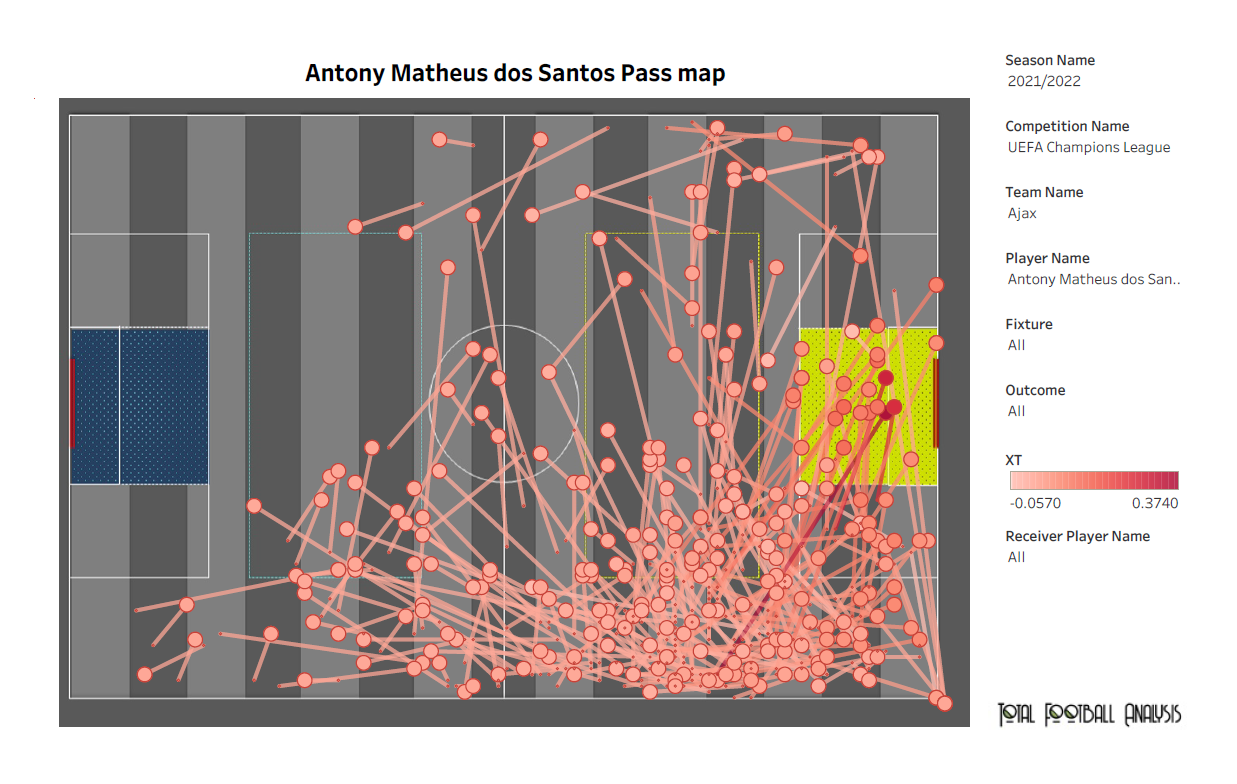 The above viz displays the areas of the pitch where the winger has delivered his passes. We can see that most of his passes have been made from the wide areas on the right wing. Antony is a creative and technical player who combines his explosiveness and close control to move past the opponent’s defenders. He is a fast, direct, and decisive winger who possesses an impressive left foot. Cutting inside from the right, he can either take a shot or find his teammates inside the penalty area. 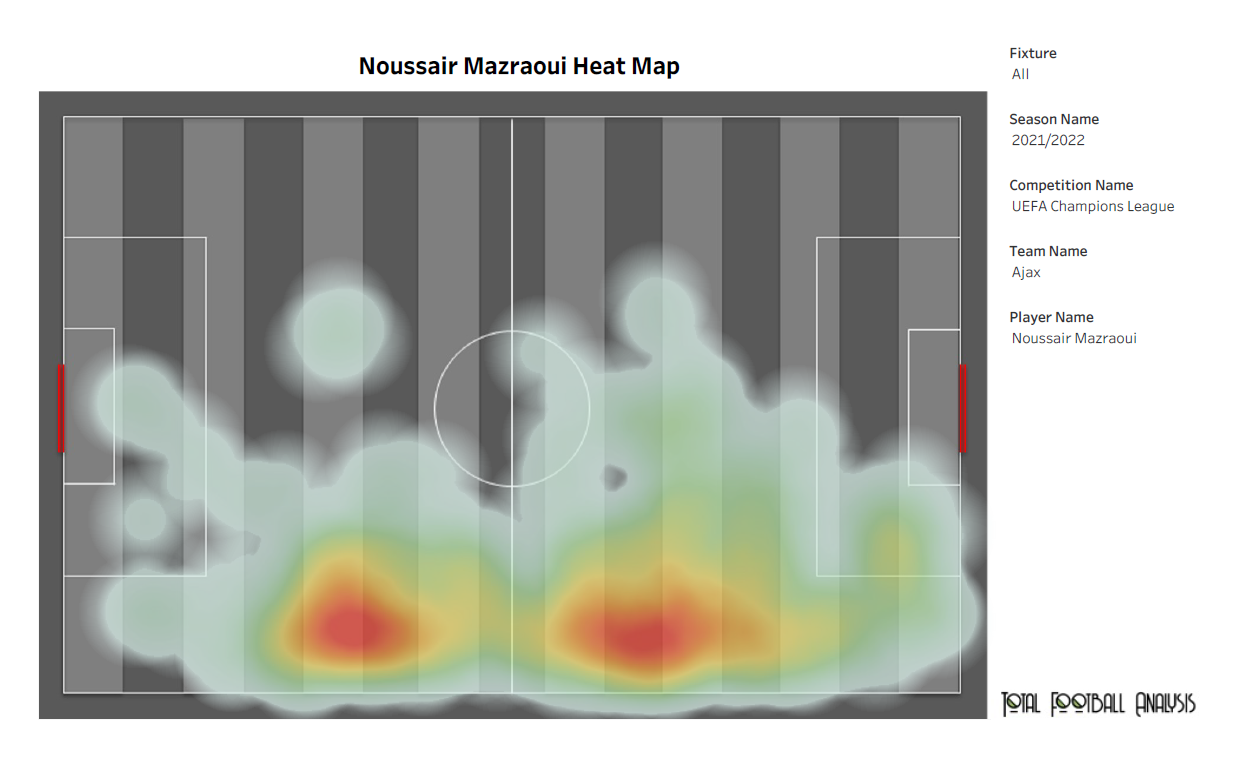 Mazraoui is a quick and direct right-back who possesses impressive dribbling ability. His crossing is where he truly shines, attempting a high number of crosses from the right wing. The above viz highlights his area of activity on the right flank. He is often seen making overlapping runs in the half-spaces, combining effectively with Antony. The Moroccan possesses impressive stamina that allows him to track back to fulfill his defensive duties.