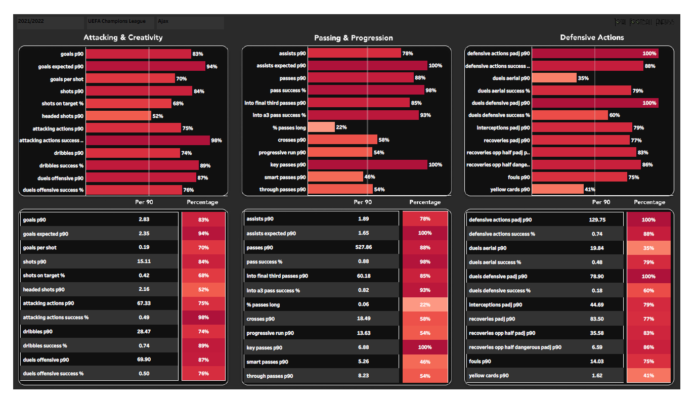 The return leg of Ajax’s Champions League Round-of-16 match is set to take place next week. Erik ten Hag’s men would be looking to get one over Benfica and move past the Round-of-16 for the first time since their dream run in the 2018-19 season. Ajax have been in a strong position since the start of the season, moving past the group stages by winning all of their matches. They have been equally impressive in the Eredivisie as well and currently sit at the top of the table.

Ajax’s excellent demonstration in the group stages has made them one of the dark horses of the tournament who could lay claim over the European glory. But first, the Dutch giants would need to ensure a passage to the quarter-finals. In the first leg of their Round-of-16 fixture, Ajax drew 2-2 away against Benfica. Despite leading 2-1 at the break, Ajax failed to take advantage for the return leg at home. While they were the more threatening side in the first half, taking the lead through Dusan Tadic, Benfica stayed in the game via a goal from Sebastien Haller. The Ivorian striker gave the lead back to his side. However, a tenacious second-half display from the home side, where they leveled through Yaremchuk in the 72nd minute, forced Ajax to make the journey back home at level-pegging.

Erik ten Hag’s men would have their work cut out for them if they are to move to the next round of the Champions League, however, a vibrant Johan Cruijff Arena and Ajax’s intimidating home form should definitely aid their cause.

Let’s take a look at some stats to gauge how the Dutch giants could line-up in the return leg. 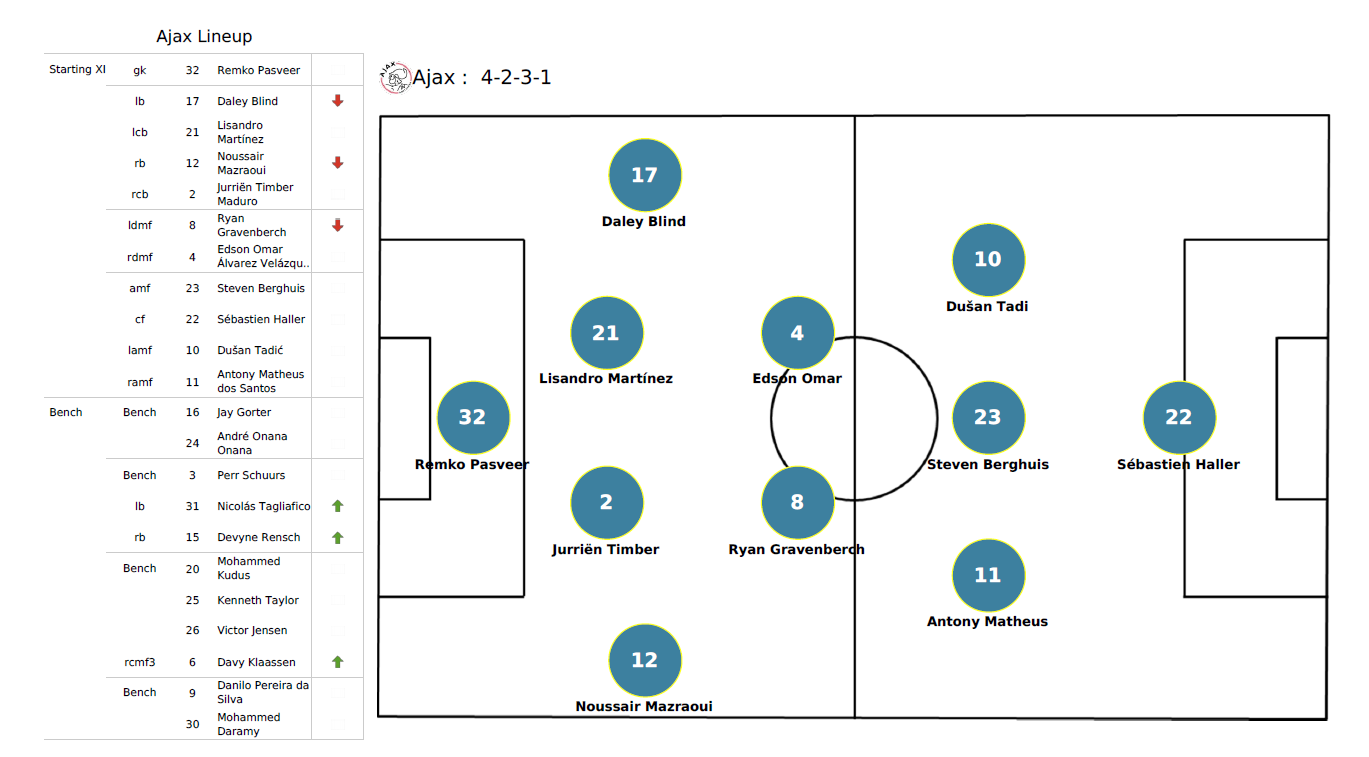 Ajax lined up in a 4-2-3-1 formation against Benfica in the first leg. Since taking charge of Ajax, ten Hag has mostly utilized either a 4-2-3-1 or a 4-3-3 formation. Ajax’s starting XI have remained almost similar to that in the group stages. Sebastien Haller led the attack with Dusan Tadic and Antony on the wings. Steven Berghuis was deployed as a number 10 while Edson Alvarez and Ryan Gravenberch took the deep midfield position. Jurrien Timber and Lisandro Martinez were the two central defenders, with Daley Blind and Noussair Mazraoui taking the full-backs roles. 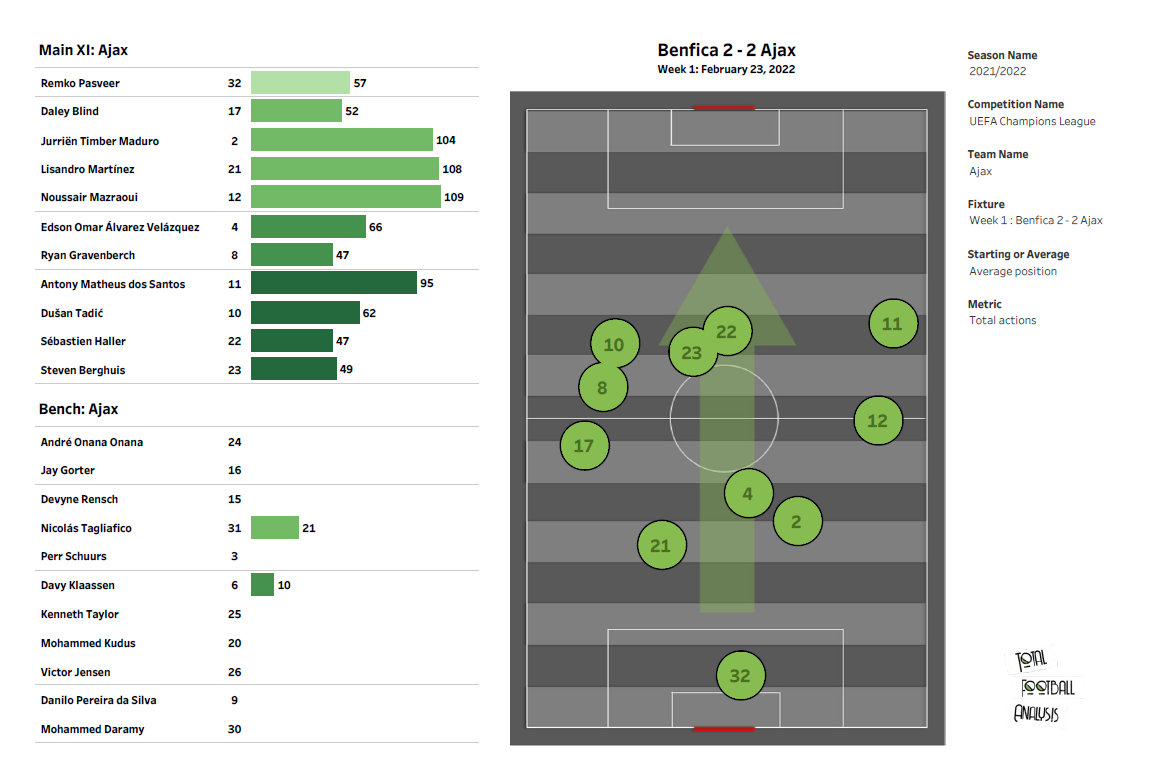 The above viz. displays the average positions taken by the Ajax players. We can see that Ajax did not play with their usual high-line as they have done in most of their group stage games. They were wider in their actual shape, crowding more on the left wing near the centre. Haller played close together with Berghuis in the opponent’s half, while Antony occupied the wide right. Gravenberch pushed high up in the opponent’s half near Tadic. Alvarez occupied the deep-midfield position supporting his two defenders. 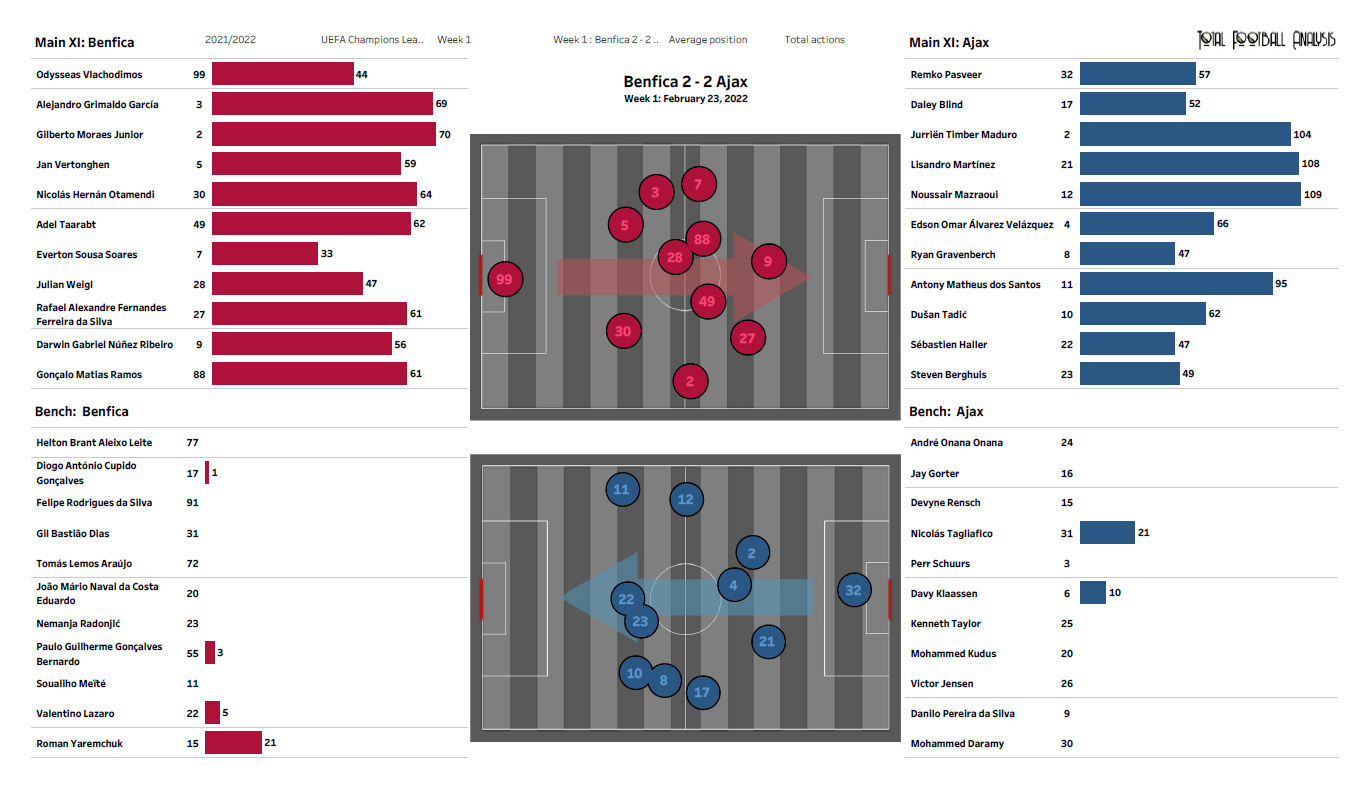 In the above viz., we can see a comparison of average positions occupied by Ajax and Benfica. We can see that Benfica played with a higher line than Ajax, with more support in the opponent’s half. Erik ten Hag could go for a 4-3-3 or a 4-2-3-1 depending upon the tactics that he chooses. However, given Ajax’s knack of opening up the opposition defense by inviting them to come out, a 4-2-3-1 could be the way to go.

Ajax fans would be looking forward to a dominant performance from their side at home against Benfica. Erik ten Hag’s squad is an impressive combination of experienced players and emerging young talent. The Dutch giants are at their strongest position in Europe in recent years.